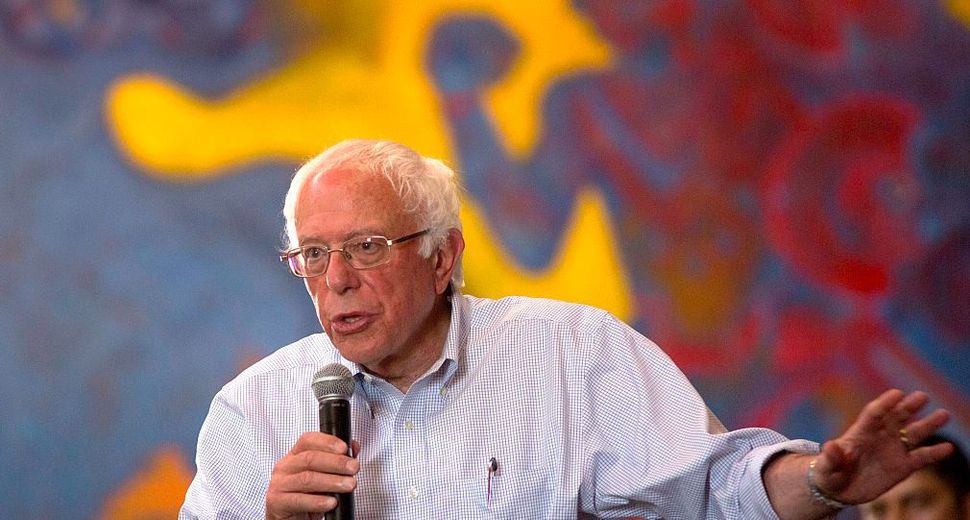 (JTA) — After weeks of skirting questions about whether he would attend the annual conference held by AIPAC, the most influential Israel lobby group in the United States, Bernie Sanders has declared his intentions: No, he won’t go, and not because his schedule won’t allow it.

In a two-tweet statement Sunday afternoon, Sanders said he would skip the conference — a traditional can’t-miss for presidential candidates — because he is “concerned about the platform AIPAC provides for leaders who express bigotry and oppose basic Palestinian rights.”

As president, I will support the rights of both Israelis and Palestinians and do everything possible to bring peace and security to the region. 2/2

His tweets, posted a day after Sanders scored a decisive victory in the Nevada caucuses, added fuel to a simmering debate over whether a Sanders administration would be good for Israel. The candidate, an Independent senator from Vermont, spent time on a kibbutz in Israel as a young adult and has released campaign ads emphasizing his Jewish identity. But he has also criticized Israel’s political leadership and taken on surrogates who support boycotting Israel; polls suggest that American Jews have not warmed to him.

AIPAC — the American Israel Public Affairs Committee, which has supported a two-state solution and U.S. aid to Palestinians — responded with a statement calling Sanders’ comments “truly shameful.” The organization noted that Sanders has never attended an AIPAC conference, which it said draws more than 18,000 people.

“By engaging in such an odious attack on this mainstream, bipartisan American political event, Senator Sanders is insulting his very own colleagues and the millions of Americans who stand with Israel,” the statement said.

The dustup raises questions about whether AIPAC’s relevance in Democratic circles is waning and underscores the group’s struggle to maintain its bipartisan brand.

J Street, a liberal group that has sought to position itself as an alternative to AIPAC, had no trouble attracting Democratic candidates to its conference in October. Five presidential hopefuls (including Sen. Amy Klobuchar of Minnesota and Pete Buttigieg, then the mayor of South Bend, Indiana) spoke in person and five other candidates (including former Vice President Joe Biden and Sen. Elizabeth Warren of Massachusetts) delivered video messages.

A major topic at the conference was whether the U.S. should consider withholding aid to press Israel to make policy changes — a question that itself marked a turning point in the Democratic conversation about Israel. Of those in attendance, Sanders offered the most robust support for pressuring Israel, while Buttigieg and Warren also supported using the assistance as a means to pressure Israel, although in more restrained terms. Biden and Klobuchar said leveraging the aid would be counterproductive.

While J Street has seen itself become a draw for presidential candidates, AIPAC has become an increasing source of controversy within some Democratic circles.

In 2015, AIPAC ran a full-throated and public campaign against the Obama administration’s Iran nuclear deal. By contrast, its differences with the Trump administration — over President Donald Trump’s retreat from a two-state outcome to the Israeli-Palestinian conflict, and his defunding of assistance to the Palestinians and of dialogue programs — have been expressed behind the scenes, if at all.

Still, AIPAC has sought to strengthen its bipartisan bona fides. In addition to continuing to host Democratic politicians, at its policy conferences in recent years it has emphasized its outreach to progressives, including by hiring staff dedicated to making inroads on the left. But such efforts have been complicated both by Israeli Prime Minister Benjamin Netanyahu’s enthusiastic embrace of President Donald Trump and the increasing influence of far-left activist groups and Democratic lawmakers who are highly critical of Israel.

Left-wing activist groups have been pressuring Democratic presidential candidates to boycott the conference, which begins March 1 — a tough date for candidates pushing for votes in the 14 primaries scheduled for March 3.

Initially there were signs that Sanders would skip the conference, but cite his unwillingness to leave the campaign trail on the eve of Super Tuesday. But instead Sanders ultimately framed his decision as a rebuke of AIPAC, echoing comments he made last year.

Warren seemed to take a similar step earlier this month, when in response to a question at a campaign event in Derry, New Hampshire, earlier this month, she indicated she would skip the AIPAC conference. The Jewish anti-occupation group IfNotNow said that the questioner, identified as Sarah O’Connor, was acting on its behalf. Warren did not push back against O’Connor’s questionable assertion that AIPAC was forging an “unholy alliance” with “Islamopohobes and anti-Semites and white nationalists” and insistence that “no Democrat should legitimize that kind of bigotry by attending their annual policy conference.”

Meanwhile, also in New Hampshire, Biden rejected pressure from an IfNotNow activist to boycott the AIPAC conference. Over the years, Biden has positioned himself as a friend of AIPAC and regularly attended its annual conference. As vice president, he spoke to the gathering and received standing ovations despite tensions between the Obama administration and the Netanyahu government.

In contrast, in recent weeks Sanders — and some Democrats — have found themselves under attack from AIPAC or its allies.

The Democratic Majority for Israel, a year-old group founded by longtime Democratic strategist Mark Mellman, ran a six-figure ad campaign in Iowa last month that questioned Sanders’ health and his ability to defeat Trump in November, The Associated Press reported. The ads also ran in Nevada ahead of its Feb. 22 caucuses.

Mellman and others involved in the group are regulars at the AIPAC conference. But Mellman has said the group operates independently of AIPAC. And AIPAC reportedly distanced itself from the ads by Mellman’s group, telling the AP that it had nothing to do with them.

But, earlier this month, AIPAC found itself in the middle of a separate controversy involving ads targeting some Democrats. AIPAC apologized and removed at least two Facebook ads that slammed “radical” Democrats in Congress, and altered a petition that said Israel’s harshest critics in Congress pose a threat “maybe more sinister” than ISIS and other terror groups.

The AIPAC apology was not entirely unqualified. The ads, it said, “alluded to a genuine concern of many pro-Israel Democrats about a small but growing group, in and out of Congress, that is deliberately working to erode the bipartisan consensus on this issue and undermine the U.S.-Israel relationship.”

An AIPAC spokesman also provided JTA with an older AIPAC ad targeting Rand Paul, a Republican senator from Kentucky, for holding up aid to Israel in 2018. That ad also was sharply worded. Paul, it said, “wants to abandon our Israeli allies.” But it did not identify his party, call Paul a “radical,” accuse him of anti-Semitism or compare him to terrorists.