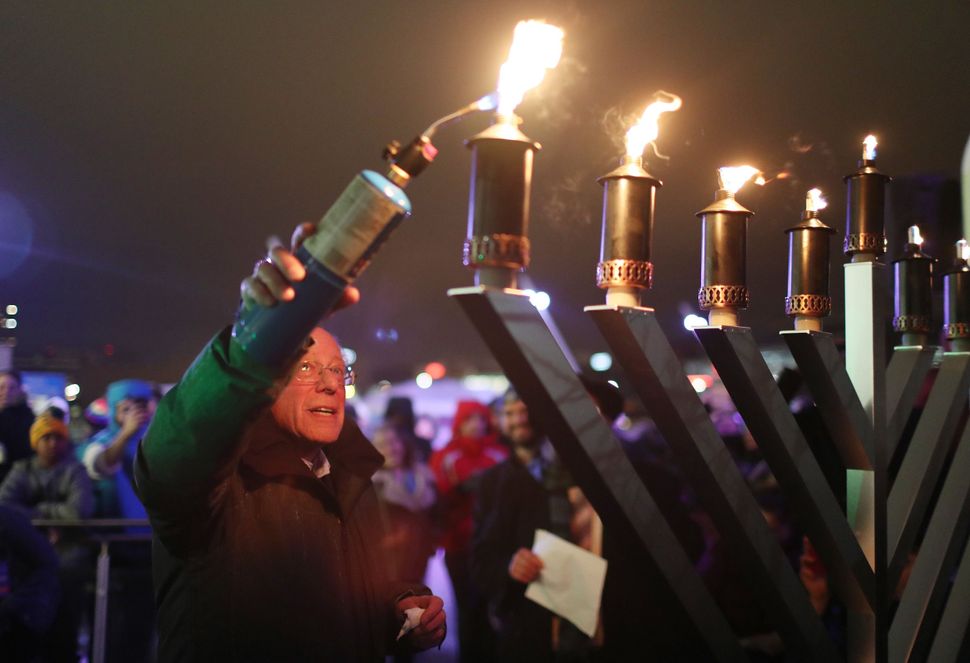 Sen. Bernie Sanders is better positioned than anyone before him to be the first Jewish President of the United States – but there are a lot of American Jews who already seem to be preparing to put an asterisk next to his name.

Over the last month, as Sanders has surged in the race for the Democratic Party nomination, he’s released campaign videos and made remarks about how proud he is to be Jewish, and how being Jewish – and particularly growing up around Holocaust survivors – is formative to his political identity.

But many Jews – often politically conservative, though not exclusively so – have countered by putting qualifiers on his Judaism.

An op-ed in the Jewish Journal called Sanders the “least Jewish person on the debate stage.” A right-wing political strategist tweeted that Sanders claiming he’d been shaped by his Judaism was “gaslighting.” An Israeli activist claimed that Sanders was lying about being a proud Jew. Even non-Jews are getting in the act, with one pundit writing in the Washington Examiner that Sanders is only “ethnically Jewish.”

Jews denigrating a Jewish politician’s ties to Judaism is not a new phenomenon, historians say. But the particulars of this campaign – Sanders’ criticisms of Israeli policy and associations with people accused of anti-Semitism, along with the contrasting presence of another Jewish contender, former New York City Mayor Mike Bloomberg – have exacerbated things.

Sanders “doesn’t fit certain models of Jewish identity that some in the Jewish establishment would want to see,” said Karla Goldman, a professor of Judaic studies at the University of Michigan.

Joel Rubin, Sanders’ liaison to the Jewish community, did not respond to requests for comment on Thursday.

The denigration of Sanders’ Judaism has usually taken two forms. The first are shots at his political choices – his call for diverting military aid to Israel in order to alleviate the humanitarian crisis in the Gaza Strip, for example, and his acceptance of endorsements from people accused of anti-Semitism like Rep. Ilhan Omar and Linda Sarsour.

But just as often, people are critical of how Sanders lives Jewishly (or doesn’t) – complaining that he’s married to a non-Jew, isn’t involved in organized Jewish life in Vermont and speaks about his Jewish identity mostly through the lens of the Holocaust.

going to a Hanukkah party tonight where I’m sure Bernie will come up, as a family member (a Jewish Democrat!!) has already told me “he’s not really Jewish, you know”

Keep me in your thoughts

These things are all true of Sanders – and of most American Jews. According to the 2013 Pew Research Center survey of American Jewry, 62% of American Jews think Judaism is mostly a matter of ancestry or culture, rather than religion. Some 73% say remembering the Holocaust is essential part of what being Jewish means to them – more common than any other identity marker. And 44% are married to non-Jews – a number that rises to 69% among people like Sanders who don’t identify with a specific religious denomination.

Sanders’ socialism is also a very Jewish choice, historically speaking. As his brother Larry told the socialist magazine Jacobin earlier this month, the heavily-Jewish Brooklyn neighborhood where they grew up “was an extraordinarily left-wing community,” where turnout for socialist candidates like Eugene Debs was “essentially a Jewish vote.” (The Forward, of course, was founded in 1897 by Jewish socialists.)

Now, though, “The American Jewish community has moved away from socialism to the extent that they don’t see it as a key way to identify as Jewish anymore,” said Rebecca Kobrin, a professor of American Jewish history at Columbia University, “whereas in the early 20th century, socialism was central to Jewish identity.”

Still, said Jonathan Sarna, a professor of American Jewish history at Brandeis University, the Jewish community has tended to have more support for Jewish political figures “whom it could hold up as role models” in terms of their Jewishness.

He noted that in the early 20th century, some prominent Jews opposed Louis Brandeis being named the first Jewish justice on the United States Supreme Court because Brandeis didn’t belong to a synagogue (Brandeis later in life became more involved in communal institutions through his Zionist activism).

Jews in the 1970s also put qualifiers on Secretary of State Henry Kissinger’s Jewish identity, not just because Kissinger was married to a non-Jew and didn’t go to synagogue, but also because he was seen as insufficiently pro-Israel and unsupportive of the cause of Soviet Jews – all criticisms that Sanders faces today.

While Sanders is hardly the only American Jewish politician to have criticized Israeli policies toward the Palestinians and other issues, he’s the most prominent one to have made the harshest critiques – calling the administration of Prime Minister Benjamin Netanyahu “racist,” for example, and saying that Palestinians are “crushed underneath a military occupation now over a half-century old, creating a daily reality of pain, humiliation, and resentment.”

“He’s not just openly critical of Israel, he’s critical of the U.S.’s unequivocal support of Israel, and I think that is seen as a taboo among a certain generation,” Kobrin said. “Members of this generation see such support as a marker of what makes you Jewish – there are internal discussions within the Jewish community about how Israel can change or improve, but it’s not done in a public way.”

Others have issues with his surrogates, or still hold a grudge from 2016, when Sanders was highly reluctant to talk about his Jewish identity and angered some by referring to his father as a “Polish immigrant” rather than a Jewish immigrant. And Sanders is not fluent in the progressive-religious “tikkun olam” language that subsequent generations of liberal Jewish politicians, both secular and observant, have adopted.

To be sure, none of these supposed disqualifiers have any basis in Jewish law, or halacha. Sanders’ mother was Jewish, so Sanders is Jewish, period – there’s no “technically Jewish” or “ethnically Jewish” category. (In any case, many American Jews subscribe to the Reform movement’s doctrine of patrilineal descent, under which anyone with a Jewish parent, father or mother, is considered equally Jewish.)

But, Sarna noted, “there’s Jewish law, and then there’s what Jews think.”

“In ‘popular halacha,’ there’s a huge difference between a Jew and someone who’s married to a Jew, raised Jewish children, involved in Jewish causes, and so on.”

What’s odd, historians said this week, is that Bloomberg has not faced the same criticisms as Sanders despite having such a parallel Jewish resume. Neither Bloomberg’s ex-wife nor his domestic partner are Jewish. One of his daughters said that their mother “kind of raised us to be Church of England.” And for all that many older Jews complain that Sanders’ shtick is so familiar as to be grating, Bloomberg can have a similar affect on others.

“One of the things that struck me is that someone involved in the Jewish community was saying to me that she didn’t want Sanders,” Goldman recounted. “She said, ‘I grew up with him’” – not literally, but that she was raised around Sanders-esque types. “I thought, ‘She could probably say the same thing about Mike Bloomberg.”

The difference, Sarna said, is not just Bloomberg’s history of philanthropy to Jewish and Israeli causes, but also the former mayor’s pro-Israel bona fides — and emphasis on them and on Jewish outreach in his campaign. In a major speech last month in Miami, he talked extensively about the importance of Israel to his life and Jewish identity.

“So it’s with a personal attachment to Israel that I say: As president, I will always have Israel’s back,” he said. “I will never impose conditions on our military aid, including missile defense – no matter who is prime minister. And I will never walk away from our commitment to guarantee Israel’s security.”

Bloomberg’s speech didn’t question Sanders’ Jewish legitimacy, but it did take an indirect potshot at him, saying that the former New York mayor was the only Jewish candidate “who doesn’t want to turn America into a kibbutz.”

If anti-Sanders forces continue to snipe at Sanders’ Judaism, it could benefit Bloomberg as the primary season continues – especially in states with large Jewish populations like California, Massachusetts, Illinois, Ohio and Florida.

If Wednesday night’s debate is anything to go by, this primary has the potential to be the nastiest Jew vs. Jew race since the 1990 faceoff in Minnesota between Sen. Rudy Boschwitz, a Republican who had been in office for twelve years, and his Democratic challenger, political science professor Paul Wellstone.

In that memorable campaign, Boschwitz personally approved a mailer, sent to Jewish voters across the state shortly before Election Day, that criticized Wellstone for many of the same complaints that people have levied against Sanders this primary season: insufficient support for Israel, ties to left-wing anti-Semites, and dismay at his intermarriage. Wellstone “has no connection whatsoever with the Jewish community or our communal life,” it read. “His children were brought up as non-Jews.”

Wellstone won a narrow upset victory. As the Forward reported on November 16, 1990, both campaigns admitted that disgust at the letter, both inside and outside the Jewish community, swung support away from Boschwitz. “It won the election for us,” Wellstone’s finance chairman, Sam Kaplan, told the Forward. “We’re slipping in the polls and the Jewish letter put us over the top.”

In that same edition, the Forward reported another intriguing result of the midterm elections — the victory of a new Jewish congressman from Vermont: Bernie Sanders.