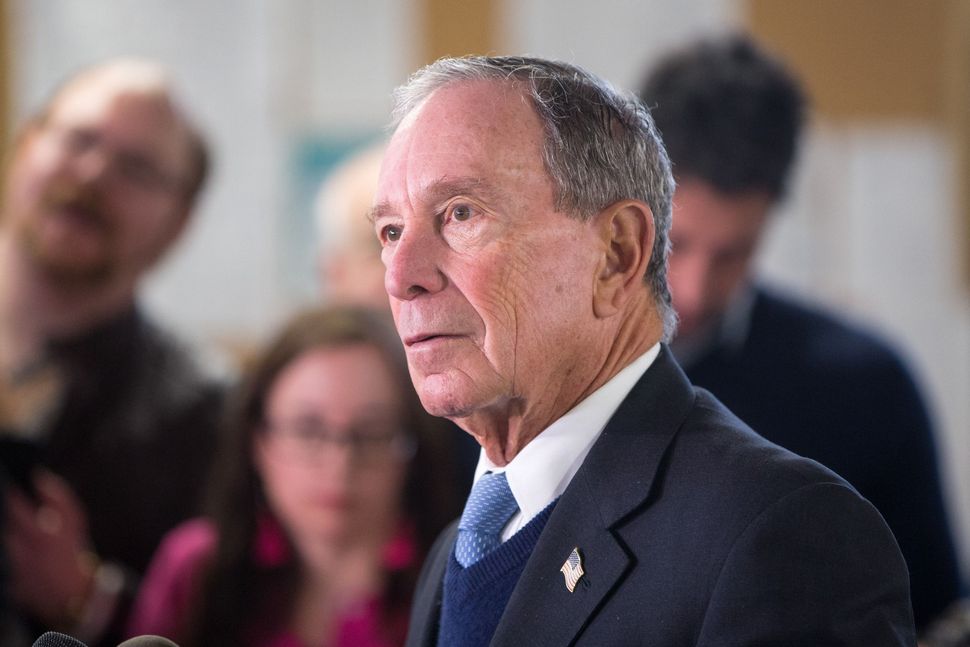 Former New York City mayor Michael Bloomberg is reportedly preparing to run in the Democratic presidential primary, after floating and then dropping the idea earlier this year. Here’s a brief overview of some aspects of his Jewish record and background.

He had a Jewish upbringing:

Bloomberg grew up in Medford, Massachusetts, the son of William, an accountant, and Charlotte, a longtime president of their synagogue and a life member of the women’s Zionist organization Hadassah. Bloomberg grew up eating in a kosher kitchen and going to Hebrew school.

According to the 2009 biography “Mike Bloomberg: Money, Power, Politics” by Joyce Purnick, Bloomberg didn’t associate much with fellow Jewish students in high school and college, and was the only Jewish member of his fraternity. He was mostly accepted there, except by one fraternity brother who called him a “bandy-legged little Jew.” Bloomberg promptly beat him up.

Bloomberg’s daughter Georgina told a biographer that the Bloomberg family would celebrate the major Jewish holidays but that her mother, who was born in Yorkshire, “kind of raised us to be Church of England.” According to a 2010 Wall Street Journal profile: “The mayor does make a point of going to services for the High Holidays, which take place next month, and he is said to get in trouble with his sister, Marjorie, if he doesn’t arrive on time for Passover seder.”

Bloomberg was elected in 2002 as New York’s third Jewish mayor. Perhaps because he had no prior elected experience, his outreach to the city’s sizable Jewish community was different than his predecessors and contemporary Jewish political leaders.

“Chuck Schumer will come to a Jewish Orthodox event and start telling people how his great-grandfather came from some town in Europe,” then-Assemblyman Simcha Felder told the Forward in 2007. “I have never heard Bloomberg do anything of the sort.”

He’s one of the world’s most generous Jewish philanthropists:

Bloomberg, who has an estimated worth of around $50 billion, has signed the Giving Pledge, promising to donate half his fortune to charity. Most of his philanthropic donations have been to non-Jewish organizations, such as his $1.8 billion gift to Johns Hopkins University, his alma mater.

But he’s also donated to some Jewish causes, including $1.5 million to redesign his childhood synagogue in Medford, Massachusetts, plus substantial donations to build a Magen David Adom facility and a wing of Hadassah Hospital in Israel.

He also was the first winner of the Genesis Prize, a $1 million award for “professional accomplishments, commitment to Jewish values, and contribution to improving the world.” He redirected the prize money to nine charities, including a joint Israeli-Palestinian infrastructure project.

And earlier this year he launched Hazira, a project to spur innovation in Israeli cities.

“I think tikkun olam finally explains a lot about Bloomberg,” biographer Eleanor Randolph told the Forward earlier this year. “He loves giving money away in the right way. He tries not to show his emotions most of the time, but everyone who’s watched him make a big donation in his mother’s or father’s name can see he’s truly happy and feels he has done what he’s supposed to do with his life and his money.

He’s a supporter of Israel:

While Bloomberg, as mayor, did not have any foreign policy responsibilities, he has expressed support for the Jewish state on occasion.

Most notably, during the 2014 Gaza war, he flew his private jet to Ben-Gurion International Airport to protest the Federal Aviation Administration’s ban on flights into Israel. “Every country has a right to defend its borders from enemies, and Israel was entirely justified in crossing into Gaza to destroy the tunnels and rockets that threaten its sovereignty,” he wrote in a Bloomberg News op-ed. “I know what I would want my government to do if the U.S. was attacked by a rocket from above or via a tunnel from below; I think most Americans do, too.”

He also called the boycott, divestment and sanctions movement against Israel “an outrage” that is “totally misplaced.”

As mayor, Bloomberg also approved and spearheaded the $2 billion high-tech research campus on Roosevelt Island, a partnership between Cornell University and the Technion-Israel Institute of Technology. Bloomberg personally donated $100 million towards the facility’s construction.