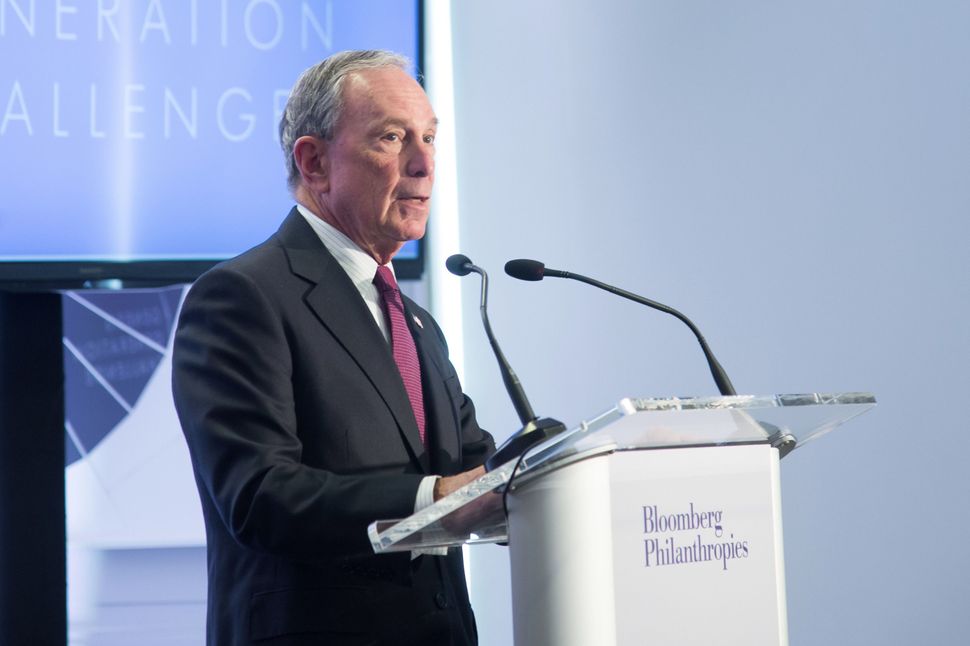 (JTA) — During a ceremony announcing the winners of the Genesis Generation Challenge, former New York City Mayor Michael Bloomberg wanted to set aside any confusion: “No, the [Genesis Prize] award will not go only to a ruggedly handsome international heartthrob named Michael,” he jested. Bloomberg last year won the inaugural $1 million prize, bestowed by the Genesis Prize Foundation for “engagement and dedication to the Jewish community and/or the State of Israel.” This year’s prize went to another Michael, the movie star Michael Douglas.

Of course, neither Bloomberg, a self-made billionaire, nor Douglas, who commands millions per movie, need the money from Genesis, a charity founded and funded by a cadre of Russian billionaire philanthropists.

And the foundation’s choices have left some scratching their heads.

When it was announced in January that Douglas was going to be this year’s recipient, were quick to point out that Douglas’ mother is not Jewish and did not embrace his Jewish roots (from his father, the legendary actor Kirk Douglas) until later in life. Fittingly, Douglas told the Los Angeles Times that he is going to use his prize money to help groups that “work with interfaith marriage and other tolerance issues” — a point he reiterated Tuesday at the awards ceremony, held at the Bloomberg Foundation Manhattan offices.

“For me this is just a wonderful surprise in my 70th year,” Douglas told JTA. “I am continuously discovering just the breadth and the depth of the interfaith issue, and I’m looking forward to addressing it.”

Even though Bloomberg referenced the Genesis Prize, that award is not to be confused with the Genesis Generation Challenge. Bloomberg launched the latter competition last summer with his Genesis Prize money, announcing in August that his winnings would be split into ten $100,000 awards for innovative projects “guided by Jewish values to address the world’s pressing issues.” It was stipulated that each team be led by someone aged 20 to 36.

Bloomberg’s prize money will finally go to work, as nine of the winners were announced at Tuesday’s event. The winning projects include Build Israel and Palestine, which has Jewish and Muslim millennials working together on infrastructure projects in Israel and the West Bank; Building Up, which installs energy-efficient technology in affordable housing complexes; and Prize4Life, a nonprofit developing technology to track markers for the neurodegenerative disease known as ALS.

“Some of the projects will exceed every expectation. Others will not — they may be dismal failures,” Bloomberg said at the event. “But every one of them deserves a shot.”

Before handing the microphone over to other speakers, such as Stan Polovets, co-founder and chairman of the Genesis Prize Foundation, and the author and Nobel laureate Elie Wiesel, Bloomberg — who famously showed his support for Israel by flying to Tel Aviv at the height of last summer’s Gaza War — took a moment to talk U.S.-Israel relations.

“To see the truth about Israel and America, you have to look beyond the headlines and beyond the politics,” he said. “The fact is the economic and philanthropic ties between our countries is stronger than ever.”