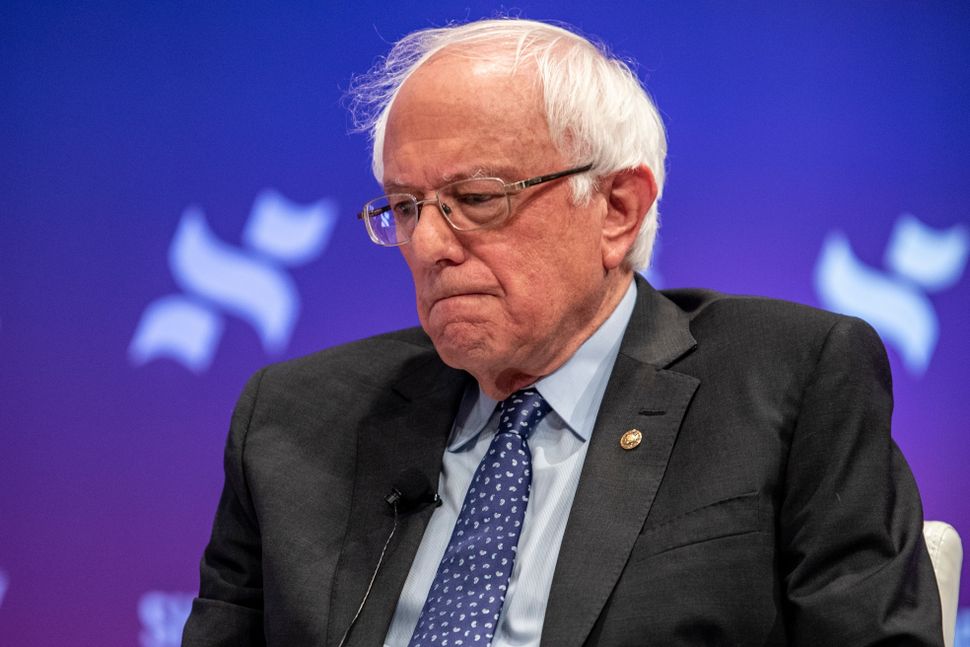 Democratic presidential candidate Senator Bernie Sanders speaks to a crowd at the She The People Presidential Forum at Texas Southern University on April 24, 2019 in Houston, Texas. Image by Sergio Flores/Getty Images

The first sign of trouble might have been in May, when a poll showed him doing far worse among his fellow Jews than with Democratic voters in general.

Or it could have been in July, when the Forward found that Jews formed a smaller part of his major donor base than nearly every other candidate.

And when the Forward asked its 100,000 Facebook followers last month what they thought of Sanders, the responses, even from people who voted for him in the last primary, were decidedly mixed. “I fully supported Bernie in 2016 but the best I could hope for now is that he help another (younger) candidate,” wrote reader Benjamin Kweskin, who added that he still backs Sanders’s policies.

Now, with six months to go before the Iowa caucuses, it’s not that he’s doing badly, exactly. But still: Why isn’t Bernie Sanders doing better with Jews? In a wide-open field with two dozen aspirants, shouldn’t it be easy for him to be the chosen candidate of the Chosen People?

“I think it’s somewhat substantive, but I don’t think that’s the main thing,” said Marilyn Katz, a political consultant in Chicago and a board member of the left-wing Israel lobby J Street. “It’s cultural and age-related.”

American Jews’ perceptions of Sanders – both of his policies and of his Jewishness – seem to be resonating more than the facts of what he’s actually said about those subjects. But for that gap to be bridged, the Sanders campaign would have to do more to target and connect with Jewish would-be voters – and that doesn’t appear to be a priority.

The Sanders campaign did not respond to a request for comment.

Too Jewish, Or Not Jewish Enough?

Sanders’s mannerisms are familiar to many Jews – he has a strong New York accent, he shouts and gesticulates. It wasn’t a stretch for him to appear in a movie as a character named “Rabbi Manny Shevitz.”

For some Jews, this is a bad thing.

“There’s some worry that if there is a Jewish nominee or president, it will somehow increase anti-Semitism. I knew if my parents were still alive, that’s exactly what they would have said,” said University of Florida professor Kenneth D. Wald, the author of “The Foundations of American Jewish Liberalism.”

Larry Ellman, a Jewish Democrat from Austin, compared Sanders to Leon Blum, the socialist Jewish prime minister of France during the 1930s; far-right hatred of Blum’s policies led to increasingly public anti-Semitism in the years before the Vichy French regime collaborated with the Nazis.

“I fear that a Bernie presidency would become a polarizing and ineffective Leon Blum type of experience that would leave the country and American Jews in a very vulnerable position,” Ellman wrote on the Forward’s Facebook page.

Ironically, the Jewish progressives who feel least comfortable with Sanders are the older ones who are most demographically similar to him, said Katz, who herself voted for Sanders in 2016 but has donated to multiple candidates this time around.

“They love Bernie’s passion, but they find him grating. I think it’s probably the New York Jew thing,” she said.

Those older Jewish progressives, she continued, were more likely to back Senator Elizabeth Warren, who supports many of Sanders’s policies but, unlike the socialist, calls herself “a capitalist to my bones.”

He’s been doing a lot more talking about it this time around — after President Trump said Jews who vote for Democrats show “great disloyalty,” Sanders retorted, “I am a proud Jewish person, and I have no concerns about voting Democratic. And in fact, I intend to vote for a Jewish man to become the next president of the United States.”

But the increased effort to talk about his Judaism is reportedly because he’s repeatedly been pressured to do so by his aides. And the Jewish community in his home state of Vermont has complained for years that Sanders has iced them out.

“I know he’s Jewish and I know he has a good heart, but give us something, make us feel proud of you,” Rabbi James Glazier of Temple Sinai in South Burlington told JTA in 2015. “I can’t tell him what to do — that’s not my business. He owns his own spiritual journey. But we need a Jewish hug from him every once in a while.”

Another factor harming Sanders’s standing with American Jews: His stances on Israel – or in some cases, what they think his stances are.

An October 2018 poll found that more than 60% of American Jewish voters are critical of Israeli policies. But it may matter how and when that criticism is given.

Sanders has long been one of the Senate’s most vocal supporters of Palestinian rights, condemning Israel’s settlement policies and blockade of the Hamas-run Gaza Strip. When the American Jewish Committee invited the Democratic candidates to submit short videos to their annual Global Forum in June, Sanders’s language was more visceral than his opponents, talking about “Palestinian people crushed underneath a military occupation now over a half-century old, creating a daily reality of pain, humiliation, and resentment.”

Windmueller said many Jewish voters are disappointed that Sanders hasn’t pushed back on them. And indeed, Sanders defended Omar after she was accused of anti-Semitism for her remarks about the pro-Israel lobby AIPAC in March – but then again, so did other candidates like Warren and Senator Kamala Harris. And Warren, Harris and former vice president Joe Biden all joined Sanders in decrying Israel’s decision to ban Omar and Tlaib from entering the country.

Indeed, Sanders’s record on Israel isn’t that much different from most of his primary opponents.

Like all the other presidential candidates, he opposes BDS, the boycott, divestment and sanctions campaign against Israel, saying that it won’t solve the Israeli-Palestinian conflict.

In a departure from many Democrats, Sanders has questioned American military aid to Israel, saying he’d be willing to consider using it as “leverage” and arguing that the Jewish state should decline American aid if they want to ban American congresswomen.

But he’s not alone there either: South Bend, Indiana mayor Pete Buttigieg has explicitly promised to cut aid if Israel annexed the West Bank. And Buttigieg is the candidate who has received the most money from American Jewish donors, according to a Forward analysis.

But still, “Bernie is more critical of Israel than a lot of Jews feel comfortable with,” admitted Jack Lieberman, a printer in South Florida and the administrator of the Jews for Bernie 2020 Facebook group.

‘Bernie Is The Ticket’

To be sure, Sanders has passionate Jewish supporters, especially among young people, who feel he’s exactly their kind of Jew: leftist, morally outraged and inspired by their tradition and history to pursue justice.

For example, while no one knows how many volunteers each campaign has, it’s likely Sanders will have one of the largest corps. He has the endorsement of the Millennial-powered Democratic Socialists of America, and Lieberman said he’s seen huge Sanders support among young Jewish activists in South Florida, especially in the growing Latino Jewish community.

“For younger Jewish activists, Bernie is the ticket,” Katz said. “They love his passion, they love his outrageousness, they love that he challenged [Clinton].”

With a little bit of effort, Sanders could dispel myths that many Jews have about him and expand his Jewish base – especially in states like California and Massachusetts, which hold elections early enough in the primary process that a few votes from their large Jewish communities could make a big difference in the battle for convention delegates.

But it seems like he’s decided not to bother. Jewish Currents – a magazine run by young Israel-skeptic leftists of the type that form much of Sanders’s Jewish support – published a profile last month titled “What Being Jewish Means To Bernie.” Three top campaign aides participated, but Sanders himself did not.

To be clear, there are all sorts of “non-Jewish” reasons that Jewish voters might not prefer Sanders, like policy disagreements, concerns that he might lose to Trump, or even the fact that he’s no longer the only progressive option.

And the two best measures of support we have right now – polling and donation data – likely undercount Sanders’s backing, since he’s the most popular candidate among young people, who are less likely to donate or participate in polls. (Though then again, they’re also less likely to actually vote.)

No matter the result of the primary, the middling Jewish support for Sanders may reflect a more meaningful phenomenon – Jewish voters don’t feel obligated to support him just because of his heritage.

“In a way, that’s progress,” said Aaron Keyak, the former director of the National Jewish Democratic Council. “If he was running 40 years ago for president, the fact that he was Jewish would be in every single article that’s written about him.”