13 Democrats Recorded Messages About Israel. Only One Spoke With Courage.

The mantra of Kirsten Gillibrand’s presidential campaign is “Brave Wins.” Yet in her video message to the American Jewish Committee’s Global Forum this week, the New York Senator didn’t even mention the word “Palestinian.” 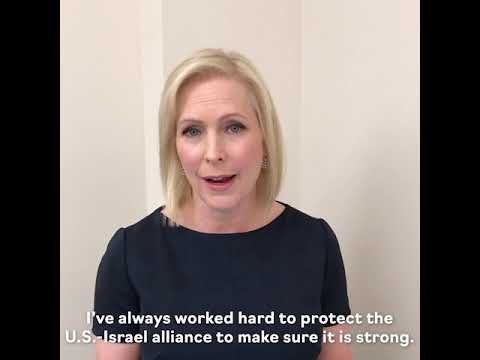 That was typical. The 2020 Democratic hopefuls talk a lot about having the courage not just to challenge Donald Trump but to transform America’s political and economic system. But with the exception of Bernie Sanders, the leading contenders couldn’t muster the nerve to offer any substantive criticism of Israeli policy in front of an establishment Jewish audience, even by video.

In the pantheon of American Jewish groups, the American Jewish Committee is considered centrist. That means it opposes bigotry in the United States and endorses a Palestinian state while simultaneously refusing to challenge even Israeli policies—like the government subsidies that encourage settlement growth—that brazenly undermine the very two state solution the AJC claims to support.

Read the AJC’s 36-page “Guide for the Perplexed” about the Israeli-Palestinian conflict and you wouldn’t know that in the West Bank Israel maintains two legal systems, one for Jews—which guarantees due process, free movement, citizenship in the country in which they live and the right to vote for the government that controls their lives—and a second, which denies all these rights to Palestinians.

And with the exception of Sanders, the major Democratic candidates didn’t challenge that intellectual and moral bubble. They inhabited it.

In their remarks, Joe Biden, Pete Buttitieg and Kamala Harris all endorsed a two state solution. Biden and Elizabeth Warren added that it’s OK for the United States to disagree with the Israeli government. But none named the issues on which they disagreed. None mentioned settlement growth or Netanyahu’s recent vow to annex parts of the West Bank, which would drive a final nail in the two state solution’s coffin.

It turns Palestinian statehood from an urgent moral imperative—since Palestinians, like all people, deserve to be citizens rather than subjects of the country in which they live—into a safe harbor for politicians who want to support Palestinian rights in theory without defending them in practice.

This is gaslighting. During the Obama administration in which Biden served, according to US officials, Palestinian leader Mahmoud Abbas accepted a two state deal within the parameters famously outlined in 2000 by Bill Clinton. It was Netanyahu who “throughout the nine months of the talks” that John Kerry brokered “did not give the slightest hint about the scale of the territorial concessions he would be willing to make.” And that was back when Netanyahu pretended to support a Palestinian state. He’s now jettisoned even the pretense.

In her remarks, Harris insisted that a two state deal “cannot be imposed by outside parties.” But Israel and the Palestinians are not independent countries of roughly equal power. Israel is a sovereign state; the Palestinians are the stateless people that Israel controls. Abbas can’t even travel to meet Israeli negotiators without a special permit from the Israeli military. 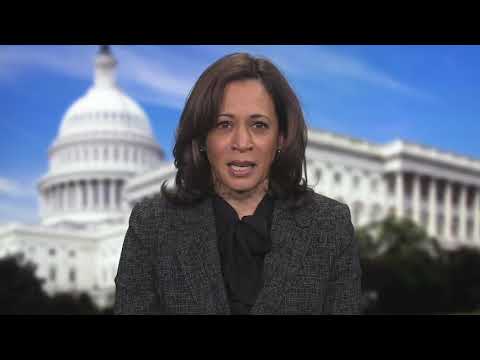 Under these circumstances, saying that outsiders should back off and let the two sides work it out is a bit like saying outsiders should have backed off and let George Wallace hammer out a deal with black leaders in the segregated south. It’s the massive imbalance of power between Israel and the Palestinians, more than any other single factor, which allows Israel to entrench its occupation at the expense of the Palestinian state that Harris supports.

America exacerbates this imbalance by offering Israel virtually unconditional military aid and diplomatic support, both of which Harris endorsed in her remarks.

The exception was Sanders, who talked about “Palestinian people crushed underneath a military occupation now over a half-century old, creating a daily reality of pain, humiliation, and resentment.”

Thank you, @BernieSanders, for speaking to #AJCGloFo via video and for sharing your views on issues of importance to the Jewish community. To watch all of the videos submitted by 2020 presidential candidates to AJC go to https://t.co/2ilv8cRcjy pic.twitter.com/4LaroPZTgr

This is what it sounds like to puncture the American Jewish establishment’s carefully constructed cocoon. Two days before Sanders’ remarks, the AJC’s CEO, David Harris, declared that Gaza has “been under Palestinian rule since 2005.” When Sanders noted that “99 percent” of Gaza’s “residents cannot leave the area,” he exposed the absurdity of Harris’ remark. If Palestinians rule Gaza, then how come Israel (with help from Egypt) determines whether Palestinians can come and go?

Why there are “refugee camps” in Gaza when it’s been under Palestinian rule since 2005?

Why Pals. in Lebanon are restricted from citizenship & work in many fields?

In truth, as the Israeli human rights group Gisha has detailed, “Gaza residents may not bring a crate of milk into the Gaza Strip without Israeli permission; A Gaza university cannot receive visits from a foreign lecturer unless Israel issues a visitor’s permit; A Gaza mother cannot register her child in the Palestinian population registry without Israeli approval; A Gaza fisherman cannot fish off the coast of Gaza without permission from Israel; A Gaza nonprofit organization cannot receive a tax-exempt donation of goods without Israeli approval; A Gaza teacher cannot receive her salary unless Israel agrees to transfer tax revenues to the Palestinian Ministry of Education; A Gaza farmer cannot get his carnations and cherry tomatoes to market unless Israel permits the goods to exit Gaza.” The AJC doesn’t tell its supporters these things. But when Sanders pierces the group’s intellectual and moral bubble, he makes it more likely that they will eventually find out.

Unlike his opponents, Sanders didn’t just endorse a two state solution. He named the elephant in the room: The fact that “Netanyahu and his allies seem to be preparing for a future in which Israel controls the entire territory between the Mediterranean Sea and the Jordan River in perpetuity, and the Palestinians receive limited “autonomy” within a disconnected series of communities.”

Sanders wasn’t saying anything outlandish. Netanyahu has publicly pledged to annex part of the West Bank. So have most of the Likud members in the Knesset. Sanders’ words just sounded jarring because they punctured the comforting illusion, which the AJC fosters, that Israel is eager to create a viable Palestinian state.

I don’t know if Sanders would make a better president than his Democratic rivals. But this much is clear: When it comes to the conflict between the Jordan River and the Mediterranean Sea, he’s the only candidate who is boldly defending the moral principles — human dignity, anti-racism and equality under the law -— that all the Democratic candidates claim to prize. And he’s doing it in front of the audiences that want to hear that message least, and need to hear it most.

Maybe it’s just a coincidence that he’s also the only Jewish candidate in the race. But one day, when the occupation is a distant memory and American Jews have long since acknowledged its profound injustice, our people will look back at speeches like the one he gave this week to the AJC with pride.

13 Democrats Recorded Messages About Israel. Only One Spoke With Courage.