The Secret To Jewish Continuity? Hard Conversations About Israel 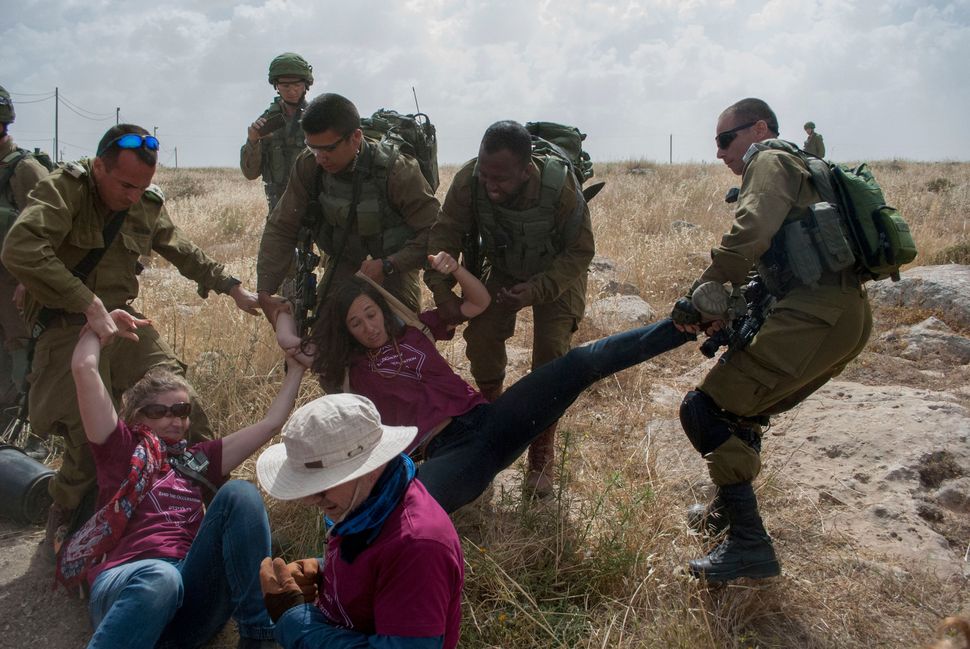 Members of an anti-Occupation collective, made up of Israelis, Palestinians, and people from other countries, being arrested by the Israeli military. Image by Sam Fine

In an op-ed last week in these pages, Rabbi Elliot Cosgrove argued that American Jews focus on Israel as a coping mechanism to distract us from “the endangered condition of our Judaism” caused by assimilation and intermarriage. If we could only allocate our resources to Jewish education and communal institutions and away from the constant Israel conversation (especially the “extremes of the Israel debate”), we would have both a stronger Jewish identity and a healthier relationship to the State of Israel.

But discussions of Israel — especially the contentious parts of that conversation — are not at odds with the future of Judaism; they are essential to it.

Cosgrove rightly acknowledges that conversations about Israeli policy raise questions about our values, such as questions about the tension between the particular and the universal. What he misses is that these discussions are not primarily driven by religious insecurities but by deep moral convictions. These debates persist in our op-ed pages and communal spaces precisely because they are l’shem shamayim — for the sake of heaven — out of concern for the moral health of our community and the Jewish people more broadly.

This is because many of us young Jews, ranging from liberal Zionist to non- and anti-Zionist, see the Israeli government as committing acts of chillul Hashem — desecrations of God’s name — on an ongoing basis. In our tradition, to desecrate the name of God and the Torah in the eyes of others is a grievous offense for which not even Yom Kippur can atone, one that is punished even when done unintentionally by an individual — all the more so by a self-professed Jewish government.

Our unyielding desire to speak about these issues is an expression of our concern for the Jewish future, as summarized by the famous Talmudic quote that the entire people of Israel is responsible for one another.

To that end, ever since I was an undergraduate, I have advocated for expanding the range of perspectives on Israel with which we engage in our Jewish institutions. And while I have seen progress, it is still common to hear Jewish leaders insist that we should retreat from discussing perspectives that challenge an imagined communal consensus.

The consequences, in the short term, are that Jews like me feel a profound sense of disconnect from our communities.

On the Friday morning after Pesach, I watched in real time over social media as dear friends of mine were arrested for nonviolent civil disobedience in the West Bank. A coalition of Palestinian, Israeli, Jewish, and international activists, they had been filling potholes in a dirt road that provides access to water, food, and health services for rural Palestinian villages. When they continued to work after the IDF declared the area a closed military zone, soldiers and border police arrested seventeen of them, dragging some by the limbs and putting others in chokeholds as they fired sound grenades. As many hours passed without word of their release, I found myself unable to contact them because Shabbat had started in their time zone. (Having contributed financially to their efforts, I felt an added layer of responsibility for their safety. Thankfully, I received news that they had all been released before Shabbat began here in New York.)

The next morning, my Modern Orthodox synagogue had a scholar-in-residence in preparation for Israel’s Independence Day. During her speech after services, she said, “Israel is not merely the only democracy in the Middle East, we are the most moral society.” And before I could help myself, I laughed.

I feel terrible to have laughed at the words of anyone on the bima, especially someone who has learned far more Torah than I have. But with images of my friends being dragged across the ground by Israeli soldiers fresh in my mind, what other reaction could I have had?

Yet the long-term consequences of avoiding uncomfortable conversations about Israel are much more severe. Different Jewish movements have varying perspectives on the nature of halakha, but they all agree that we have a chain of tradition to uphold and pass along to our children. This chain of tradition is described in Pirkei Avot, from which I, like many Jews, have a custom to study a chapter every week starting the Shabbat after Pesach. That same Shabbat, while feeling anger, pride, and relief at the news of my friends in Israel, as well as deep dissonance sitting in my own synagogue, I started with the first mishnah of the first chapter: “Moses received the Torah at Sinai and transmitted it to Joshua, Joshua to the Elders, and the Elders to the Prophets, and the Prophets to the Men of the Great Assembly…”

If future generations see us as having enabled large-scale chillul Hashem, then the Torah will be severely diminished in their eyes, and that chain of transmission will be irrevocably damaged. We must challenge ourselves by engaging with difficult perspectives about Israel — turning words into action as necessary — for the sake of our children, who will examine our moral legacy for years to come.

Caroline Morganti lives and works in New York City. Her writing has appeared in The Forward and Haaretz.

The Secret To Jewish Continuity? Hard Conversations About Israel