The Lesson Of Netanyahu’s Victory: Israel Will Not Change Without Pressure 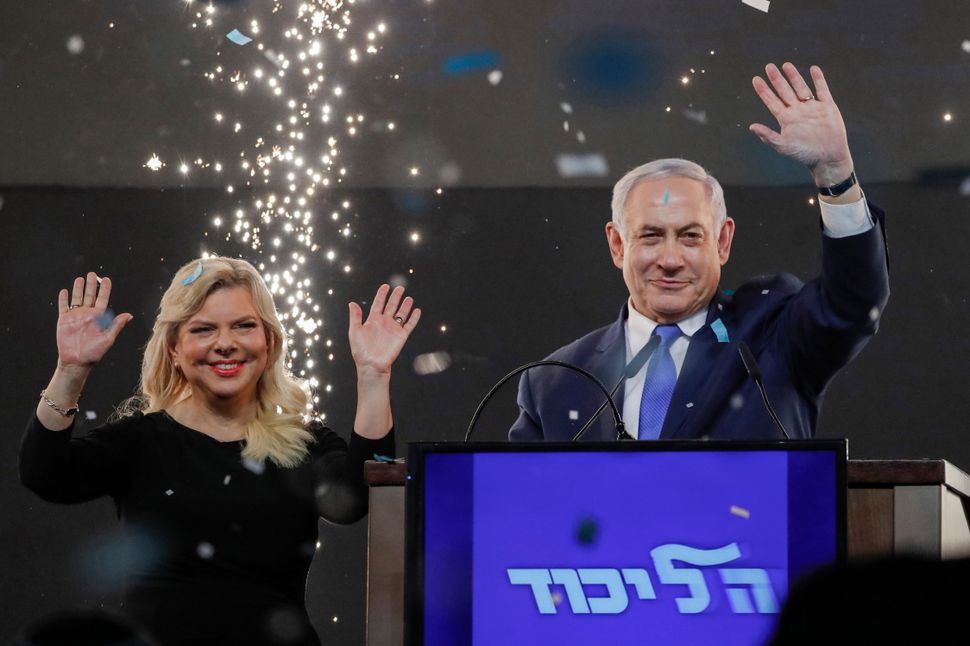 The lesson of Benjamin Netanyahu’s apparent reelection victory is simple, and old. Frederick Douglass articulated it 162 years ago: “Power concedes nothing without a demand.”

For a decade now, commentators have bemoaned the demise of the Israeli left. They’ve attributed the left’s decline to a rising Orthodox population. They’ve attributed it to the legacy of the second intifada, which traumatized and embittered Israeli Jews. But there’s a more basic explanation: The left wants Israel to fundamentally change course. It wants to create a Palestinian state in the West Bank and Gaza Strip, which would require uprooting perhaps a hundred thousand settlers. For Israel, which has been steadily tightening its grip on the West Bank for more than fifty years, that would constitute wrenching change. Yitzhak Rabin was assassinated for merely launching a peace process with the PLO; he hadn’t even endorsed a Palestinian state. Any serious Israeli move to negotiate one would spark massive protests by the pro-settler right. Army units might refuse to withdraw settlers. There would be new threats of political assassination. Pundits would speculate about the risk of civil war. And a Palestinian state itself would create unforeseeable risks.

As a general rule, people don’t choose painful, convulsive change when they’re comfortable with the status quo. And, as Noam Sheizaf has long argued, Israeli Jews are comfortable. Yes, there are occasional rocket attacks from Gaza, but Israel has Hamas fairly well deterred. Yes, there are occasional terrorist attacks from the West Bank, but in partnership with the Palestinian Authority, Israel keeps them to a minimum. Israel’s economy is strong. And Israel is growing more — not less — accepted on the global stage. Under these conditions, it was entirely predictable that in this year’s election neither Netanyahu nor his main competitor, Benny Gantz, supported a Palestinian state.

Barack Obama predicted this. Early in his presidency, Malcolm Hoenlein, executive vice chairman of the Conference of Presidents of Major American Jewish Organizations, tried to convince Obama that the best way to get Israel to negotiate a Palestinian state would be to supports its government unconditionally. “If you want Israel to take risks,” argued Hoenlein, “then its leaders must know that the United States is right next to them.” Obama disagreed. “When there is no daylight [between the two governments],” he replied, “Israel just sits on the sidelines.”

It will not return until subjugating millions of Palestinians becomes uncomfortable for Israeli Jews. First, Palestinians must stop serving as agents of their own oppression. Right now, the Palestinian Authority serves as Israel’s subcontractor in the West Bank: It picks up the garbage; it runs the schools; it represses dissent against both itself and Israel. When that changes—when the Palestinian Authority disbands and stops doing Israel’s dirty work—Israeli Jews will grow uncomfortable. They’ll grow uncomfortable because they’ll be forced to choose between chaos in the West Bank, which could threaten Israeli security, and direct occupation of the West Bank, which would require Israel 19 year olds to patrol every Palestinian city and town.

That’s the choice Palestinians forced Israel to make during the first intifada. For the two decades since 1967, Israel had controlled the West Bank at low cost. But when Palestinians rose up in the late 1980s, the price of that control increased dramatically, which led to Rabin’s support of the Oslo Peace Process. When Palestinians rise up again — hopefully non-violently, as they mostly did in the first intifada — and raise the cost of occupation again, Israeli politics will change again.

Secondly, the United States must stop making occupation comfortable. The American Jewish establishment — which is dedicated to ensuring that Israel can abuse Palestinians with impunity — likes to claim that, because Israel is a democracy, America must subsidize its behavior. But Israel’s policies towards Palestinians in the West Bank and Gaza Strip have as much democratic legitimacy as Mississippi’s policies towards African Americans during Jim Crow. You can’t claim democratic legitimacy for policies that perpetuate your control over people who lack the right to vote for the government that dominates their lives.

Last week, Beto O’Rourke called Benjamin Netanyahu a “racist.” That’s true, but insufficient. The bigger problem isn’t that Netanyahu is personally racist. It’s that maintaining separate legal systems for Jews and Palestinians — as Israel does in the West Bank — is racist. Allowing Jews, but not Palestinians, due process, free movement, citizenship and the right to vote for the government that controls their lives — these things are all racist. And a Democratic presidential candidate must summon the courage to call for the United States to stop funding this racism to the tune of almost $4 billion a year. Yes, Israel has real security needs that deserve American support. But the United States has every right — in fact, it has an obligation — to condition its aid on Israeli moves to disband the system of institutionalized racism it has established in the West Bank. That could start with an end to settlement growth and a public Israeli commitment to negotiate a viable Palestinian state.

Once a Democratic candidate says this, the debate inside the party will change forever. Most Democratic politicians and liberal pundits already know that subsidizing Israeli oppression is wrong. They just need permission to say so. When Democrats grant themselves that permission — and retake power — Israeli Jews will realize that the occupation is threatening their relationship with the United States. That will make them uncomfortable, and Israeli politics will change.

I wish there was another way. I wish my brethren in the Jewish state were angelic creatures whose consciences alone could move them to stop oppressing millions of their fellow human beings. But the Haggadah that we will read later this month reaffirms what Frederick Douglass taught: The world doesn’t work that way.

Power concedes nothing without a demand. I hope that demand is made non-violently and with love. But for the Democrats running for president — and the people choosing them — the lesson of this week’s Israeli election is clear: The demand must come, now.

The Lesson Of Netanyahu’s Victory: Israel Will Not Change Without Pressure