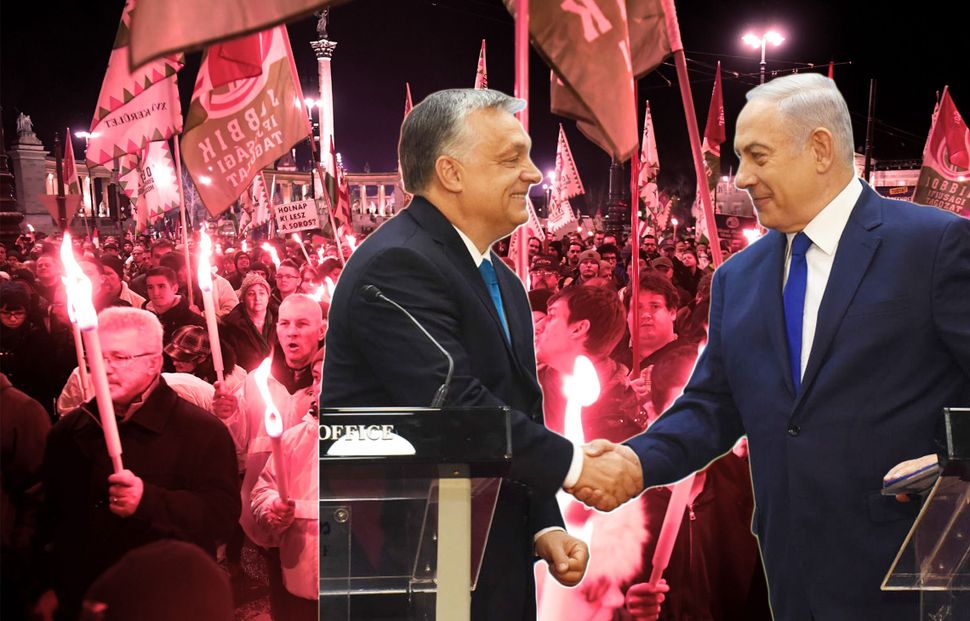 The Israeli government is collaborating with nationalist regimes in Eastern Europe to diminish the legacy of the Holocaust. Again.

That is the gist of an exclusive report from Barak Ravid, a leading journalist in Israel, regarding a controversial planned museum in Hungary.

According to the report, Israel’s Foreign Ministry has admirably taken the traditional stance on the museum: That no revision to the consensus historical record of the Holocaust is acceptable. That this museum will reportedly be run by Maria Schmidt, a historian whose House of Terror Museum minimizes the Holocaust, was no doubt seen as cause for alarm.

Apparently not for the Prime Minister’s Office, though, which is engaging in talks with the Hungarian government to find a compromise position.

The matter of Holocaust revisionism of course warrants no compromise, especially from the Jewish state. And yet, This is only the latest in a line of disturbing actions that indicate Netanyahu and his government do not treat anti-Semitism and the memory of the Holocaust with the solemn seriousness they both merit.

In fact, Netanyahu and his coalition see an accusation of anti-Semitism merely as a tool or an obstacle in advancing their agenda, something which they can use against enemies and something from which they must protect friends.

In July 2017, Netanyahu also overruled the Foreign Ministry by withdrawing a condemnation of a government-backed campaign in Hungary to demonize George Soros, which the Jewish community there quite rightly saw as nakedly anti-Semitic.

And this past summer, Netanyahu put his country’s name on a joint statement with Poland that assisted the far-right government there in whitewashing ubiquitous Polish complicity in the Nazi-led persecution of the Jews.

The impetus for the statement was a proposed Polish law that would have criminalized a broad range of remarks that ostensibly blamed the Polish people for Jewish deaths in the Holocaust. Yad Vashem, which seldom involves itself in domestic political controversies, said the statement was filled with “grave errors and deceptions.”

And yet, Netanyahu signed on to this naked act of Holocaust revision.

But whitewashing Holocaust denial is only the most extreme example of the Jewish State’s betrayal of Diaspora Jews on the anti-Semitism front.

Following the Tree of Life massacre in Pittsburgh in October, mourning Jews were treated to an abhorrent display by Diaspora Affairs Minister Naftali Bennett, who arrived in the United States to tell them that, “using the horrible anti-Semitic massacre to attack the president is unfair, it’s wrong.”

“Clearly President Trump is a great friend of Israel and of the Jews,” Bennett added, before mentioning that anti-Semitism was also a problem on the Left.

In each of these cases, Israeli government officials chose to go out of their way in helping a foreign nationalist government or leader deflect accusations of anti-Semitism. Worse, they use the accusation of anti-Semitism only to help their own political causes, selling out Diaspora Jews who face it at every turn.

When it comes to the Palestinians, the Iranian regime, the BDS movement and even a targeted boycott of settlements, the Israeli government, and Netanyahu in particular, do not hesitate to invoke anti-Semitism and the Holocaust, sometimes making embarrassing errors.

For the memory of the actual Holocaust, however, less care is taken and political alliances are a superior concern. As a result, the Polish and Hungarian governments can point to the approval of the Jewish state in de-legitimizing the fears of local Jews.

This is not only a grave betrayal of Jewish history but a wholly unnecessary one. Silence, or declining to contradict the response of Jewish communities to anti-Semitism in their own countries, is a more respectable and readily available option that would not put foreign relations at serious risk.

Unfortunately, it appears Israel is intent on using its status to burnish the reputation of morally dubious allies, and not just in Europe and the United States.

According to a report in The Washington Post, Netanyahu lobbied the White House in support of Saudi Arabia’s Crown Prince, Mohammed bin-Salman, in the weeks following the Kingdom’s murder of journalist Jamal Khashoggi.

That Israel is now eyeing diplomatic relations with Sudan, whose leader is wanted by the International Criminal Court for genocide, suggests we have yet to reach rock bottom.