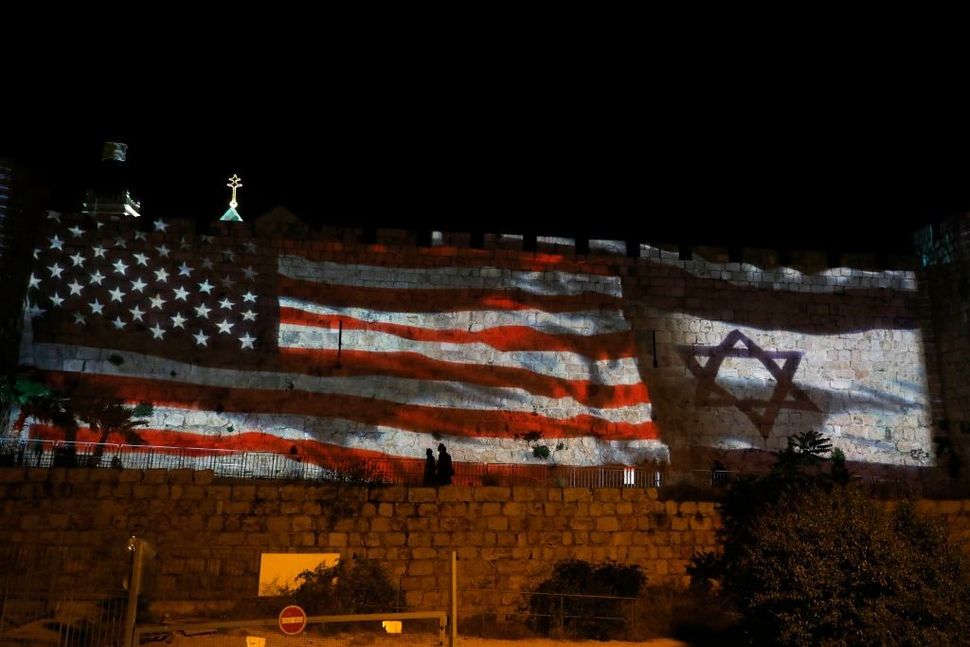 The Israeli and United States flags are projected on the walls of the ramparts of Jerusalem’s Old City, to mark one year since the transfer of the US Embassy from Tel Aviv to Jerusalem on May 15, 2019. (Photo by AHMAD GHARABLI / AFP) (Photo credit should read AHMAD GHARABLI/AFP/Getty Images) Image by Getty Images

The great Jewish debates of the 1950s and 1960s revolved around whether the Bible was or was not divine. It wasn’t a new conversation for Jews, but it took on new meaning in the wake of the Holocaust. We weren’t just arguing over whether God wrote the Bible, but over whether God was in Auschwitz, and if one could still believe in that God.

These days, American Jews no longer debate who wrote the Bible. Instead, we argue about Israel. Israel is what brings us together and what tears us apart. We work to keep our relationship with Israel strong and are anxiety-ridden at signs of its weakening. We fear for our children’s encounters with anti-Zionism on campus, and we hope that they sign up for Birthright trips. The labels that delineate our denominations are no longer based on belief or observance — Orthodox, Conservative, Reform, Reconstructionist — but on our views about Israel: AIPAC, ZOA, JVP, J-Street and the rest of the alphabet soup of Israel advocacy.

Despite the fact that we do not live, vote, serve in the military or pay taxes there, Israel has become the organizing principle and civil religion of American Jewry.

But like the debates of the 50s and 60s, the conversation about Israel is not just about Israel. For American Jews, Israel is a mirror image, a Rorschach test that reveals our hopes, fears, foibles and fissures.

As Golda Meir explained to then-Senator Joe Biden when he visited Israel in the nervous hours prior to the Yom Kippur war, “Don’t worry, we have a secret weapon against the Arabs: We have no place to go.”

Israelis don’t have a place to go, but American Jews do: They can assimilate. And this fear of assimilation is the biggest threat we face.

In other words, by their very borders and national identity, Israeli Jews are inoculated against the thing that keeps American Jews up at night. And American Jews’ attachment to Israel is at least in a part an attachment to a world in which Jewish continuity is not threatened.

But it goes beyond that. Our arguments over Israel are also about Jewish power.

For two thousand years, the Jewish story has been one of powerlessness and exile. Today, Israel is a Jewish state in possession of great power. While Jewish sovereignty is a cause for celebration, American Jews are still seeking to come to terms with this new reality.

When we call foul over the squandering of the two-state solution, the chipping away at Israeli democracy or abuses by Israel’s chief rabbinate, it reflects our effort to have a relationship with a Jewish state increasingly at odds with our Jewish self-understanding.

This is made more awkward by the co-opting of the Palestinian cause by the American left, and the current bromance between the populist-leaning Israeli prime minister Benjamin Netanyahu and America’s President Trump.

Discussions on Israel have become proxies for the question of whether a Jew can be committed to universalism and particularism, liberalism and self-preservation — all at the same time.

American Jews also talk about Israel to avoid the real elephant in the room: Far too many Jews have made support for Israel a substitute for Judaism. It is just plain easier to write a check than it is to keep yourself and your children home on Friday night to light Sabbath candles. American Jews are more comfortable discussing what grades of plutonium Iran can weaponize than they are opening a prayer book.

If Israel engagement were just a compensatory act for a paper-thin American Jewish identity, that would be bad enough. But it is much worse.

Consider the self-destructive take-down politics of American Jewry — on the right and left. Clearly, it is easier to take someone to task for their views on Israel that it is to come face-to-face with the withering of Jewish identity in one’s children and grandchildren. If Jews spent less time attacking each other on Israel and more time building Jewish identity, devoted fewer resources to supporting the extremes of the Israel debate and more to making Jewish day school education, camping and synagogue life affordable, American Jewry would be in better shape, and so would our relationship with Israel.

Why do American Jews talk about Israel so much? Because it is easier than turning the lens on the endangered condition of our Judaism.

We are rightfully troubled by matters of religious pluralism in Israel, the future of Israeli democracy and the fate of the two-state solution. But underlying our conversations about these matters is a more profound issue: the worrying state of our Judaism.

We do ourselves, and Israel, a disservice to sweep that under the rug. Maybe the best gift we can give ourselves and our relationship with Israel is to make sure we are talking about what we really need to talk about.