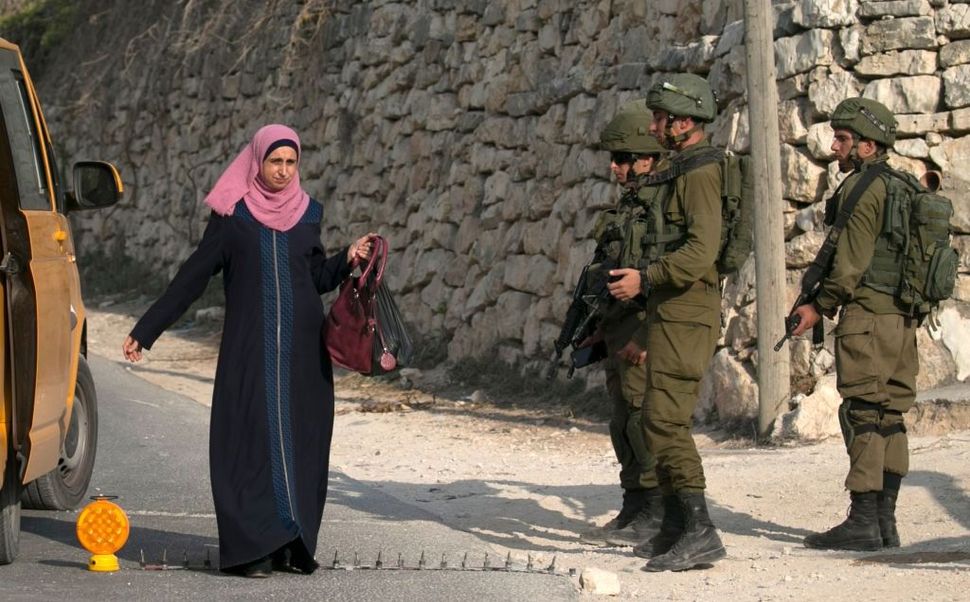 Israeli soldiers inspect cars at a checkpoint in the Palestinian West Bank village of Bayt Lid, east of Tulkarem, on October 10, 2018. – A Palestinian shot dead two Israelis and wounded another at a West Bank settlement’s industrial zone on October 7 as security forces hunted the suspected assailant who also worked at the site, the Israeli army said. (Photo by JAAFAR ASHTIYEH / AFP) (Photo credit should read JAAFAR ASHTIYEH/AFP/Getty Images) Image by Getty Images

This week, U.S. Middle East Envoy Jason Greenblatt tweeted about a Ramadan Iftar — the evening meal in which Muslims end their daily Ramadan fast. This Iftar took place in Hebron, and Israeli settlers were the honored guests.

“A groundwork for peace, a wonderful example of what could be possible,” Mr. Greenblatt wrote, sharing an original tweet by Uri Karzen, Deputy Director General for the illegal settlements in Hebron.

Groundwork for peace indeed! A wonderful example of what could be possible. https://t.co/105PSfcFzv

“First #Iftar in #Hebron with Kosher food,” Karzen tweeted, tagging Greenblatt. “We are laying the groundwork for peace between people and economic prosperity for all.”

One could be forgiven for thinking they were right. After all, who doesn’t love to see Jews and Muslims breaking bread in the land we both share? I myself, a Palestinian who has lived his entire life under Israeli occupation in the city of Hebron, want nothing more than to experience an Iftar with my friends — many of whom are Jewish — that celebrates equality, justice, and freedom.

But the gathering Greenblatt promoted was far from a groundwork for peace. The opposite, in fact: It undermines any hope for peace and prosperity.

The Palestinian Iftar Greenblatt touted as a model for coexistence was hosted by Asharaf Jaabari, one of the least respected Palestinians in the Hebron community. Since 2002, Jaabari has been accused by tens of people of stealing money, and has at least six orders of arrest against him. His brothers have disowned him, and the majority of his own family shuns him. Yet here he and others are, hosting a Kosher Iftar with the settlers of the Hebron community, who rank among the most fanatical and violent of the entire settler movement; they are described this way even by other settlers.

This Iftar was to coexistence what the Greenblatt, Kushner, Trump peace plan is to peace.

In just a month, Greenblatt and others have said, U.S. president Donald Trump plans to release his “Peace Plan.” But we already know that the plan will have nothing to do with peace. From what we know of the plan — which is very little — it involves the Saudis and Egyptians offering economic development in exchange for our hopes and dreams of living with freedom and equality.

It’s one thing to acknowledge that this is an exchange, and that Trump is trying to buy off Palestinians’ longing for freedom, justice, and self-determination. But it’s quite another thing to pretend that this bribe is justice.

And yet, that’s what the Trump team is doing. And it’s ironic, given that it is Israel’s very policies — aided by U.S. economic and diplomatic support — that are responsible for having restricted and undermined the Palestinian economy such that the necessary Palestinian infrastructure for sustained economic growth cannot be achieved. Since Israel’s occupation, Palestine’s economy has undergone a process of de-development as the settlement economy skyrockets and we in Hebron are not able even to operate a basic vegetable market on the main street in our town. Palestinian farmers are forced to leave their lands to become unskilled or semi-skilled workers for the settlements and for Israel’s economy.

What the U.S. Peace Plan will certainly do is create a further divide in Palestinian society, a small one percent class of wealthy Palestinians who trade their freedom and the freedom of their people in exchange for a couple of swimming pools and monthly permits to visit the sea in Tel Aviv.

This explains Greenblatt’s tweet. Trump, his son-in-law Jared Kushner, and Greenblatt are looking for any Palestinian willing to accept their Peace Plan, devoid as it is of human rights. Unable to sell it to decent, normal Palestinian people — like those who spend their days worrying their young children will be arrested, beaten and imprisoned by the military — they instead now are working on selling it to thieves.

The reality is that it is not possible for an oppressed people to live in coexistence with its oppressors. Coexistence is not a prisoner wishing a good night to his jailer, a slave inviting his master for tea, or even a white man kindly sitting in the back with his African American neighbor during Jim Crow. No fake economic peace plan will suffice for justice just as no humanitarian aid can provide us with dignity, equality, and freedom.

The only answer is for those with privilege to use their privilege to stand alongside those who are oppressed. This is is what took place when rabbis and ministers joined Dr. Martin Luther King’s march from Selma to Montgomery.

It is true solidarity like that, not a kosher Iftar with settlers, that will bring peace.

I am deeply proud to be able to say I work closely and have deep friendships with many American Jews. Our friendships are based on mutual respect and a common goal that we may build a future where our people have full rights and respect. We work together, co-resisting the occupation in a form that recognizes the rights and privileges they have which I am denied. We do this co-resistance so that someday, we may actually coexist together.

I am nearing the end of a long trial in a military court, where the Israeli military has brought 18 charges against me for things that in a free society would never be considered a crime. The charges against me involve protesting without permission, criticizing the occupation, and peacefully organizing for the basic human rights of my people. For this, I expect to serve a prison term of around two years. I will serve this term proudly and wait to return to my community and to my work, even if that means another prison term will come my way.

I look forward after I serve my prison term to sharing Ramadan Iftars and Passover Seders with them. In the meantime, don’t allow the hypocrisy of an Iftar hosted by Palestinian thieves and attended by settlers thieves to stand.