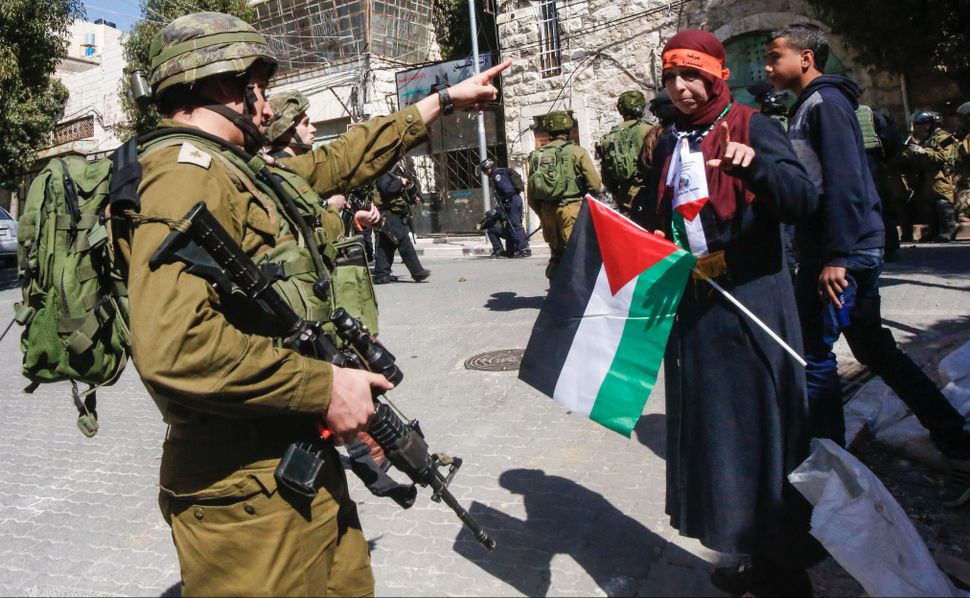 I am a Palestinian living in Hebron.

I live stateless with no rights.

I have no rights to general assembly, no rights to free speech, to due process or to freedom of movement. I get 10% of the water illegal settlers living next to me get. I am not allowed to walk down the streets of my own city. I can’t travel, work, or do business without being granted permission, which I must seek from the occupying forces themselves.

Living under military law next to illegal Israeli settlers who live under civilian law, I know well the experience of terror and violence. I also know well what apartheid was, and what it looks like today in my city.

As such, I find it curious that the German Foreign Minister Sigmar Gabriel has found himself under attack by Israel’s right-wing government and its supporters for comparing Israel’s policy in my city to apartheid in South Africa.

A German Jewish activist from Cologne, Malca Goldstein-Wolf, penned an open letter accusing Gabriel of “providing further ammunition to youths who were fed anti-Semitism with their mothers’ milk.”

But Hebron in particular and Palestine in general are divided between those who have rights — namely settlers — and those who don’t — Palestinians like me.

In 1994, a Brooklyn born settler named Baruch Goldstein, opened fire in Hebron’s Ibrahimi mosque, killing 29 Palestinians in worship. Israel punished us collectively by forbidding us from driving on our main street, Shuhada Street. In addition, what had previously been our vegetable market was “sterilized” – the military term for free of Palestinians.

This was the onset of the process of segregation in my city, turning it into a ghost town, as 40% of the residents left.

Today, settlers can drive cars on Shuhada Street and carry weapons. But I am barely allowed to enter. When I do, I am compelled to pass through checkpoints stationed at each end of the street. Once inside, I submit my ID card and the special number I have been assigned as a resident of my neighborhood, Tel Rumeida. Sometimes it takes hours to get through the checkpoint, only to be denied entry.

Surely, upon witnessing this segregation in 2012, the de-facto reality of apartheid was undeniable to Minister Gabriel. Since Gabriel’s visit in 2012, things are even more severe in Hebron. The checkpoints have increased in number and have been remodeled so that their entrances resemble the front of a maximum security prison. Now what happens to me inside the checkpoint cannot be witnessed by those on the outside.

But the most brutal form of Israel’s apartheid in the West Bank is its two separate sets of legal systems. I currently face 18 charges in Israeli military court for protesting non-violently, exercising free speech, freedom of assembly, and freedom to protest. Palestinian teenager Ahed Tamimi, recently arrested for slapping a soldier who attempted to invade her home, is facing 12 charges.

Unlike settlers living illegally on Palestinian land, Ahed and I, like all Palestinians, are subject to military rather than civilian law. Contrast Ahed’s case to Yifat Alkobi’s and you will see what two justice systems for two kinds of people looks like. Yifat is infamous for being filmed taunting my neighbor, calling her a “sharmuta” (“whore” in Arabic). But Yifat, like Ahed, once slapped a soldier in Hebron who tried to stop her from her from throwing stones. Unlike Ahed who sits now in military jail, Alkobi was simply taken to the police station for questioning and released the same evening on bail.

Yifat, like the numerous settlers who have assaulted me, has never served any jail time for her offenses. On one rare occasion, when my nose was broken by a settler who attacked me in Hebron, the Israeli courts found him guilty thanks to footage of the assault. But the proceedings took four years in civilian court, and ultimately, the only punishment imposed on him was a one month restraining order from Hebron.

Conversely, if I had broken his nose, I would have received three to seven years in jail. That is, if I hadn’t been shot first.

This bleak unjust reality is understandably what prompted Minister Gabriel to publicly reflect in 2012, “I was just in Hebron. There’s a legal vacuum there for Palestinians. This is an apartheid regime, for which there is no justification.”

His recent re-invocation of the similarities between Israel and apartheid South Africa came shortly after President Trump’s declaration of Jerusalem as the capital of Israel, which has effectively served as another nail in the coffin for a two-state solution. Shortly following Trump’s announcement, Netanyahu’s Likud party passed a resolution to annex the West Bank, thus formalizing the one-state reality, which former Secretary of State John Kerry aptly called “separate and unequal.”

My city, Hebron, is a microcosm of the occupation that exists through the West Bank. The Israeli government and its apologists will surely continue to attack Minister Gabriel and others, who compare Israel’s policies to those of apartheid South Africa.

Yet, the only way for Israel to effectively cease such comparisons from being made is for it to end its system of apartheid in Hebron and Palestine at large.