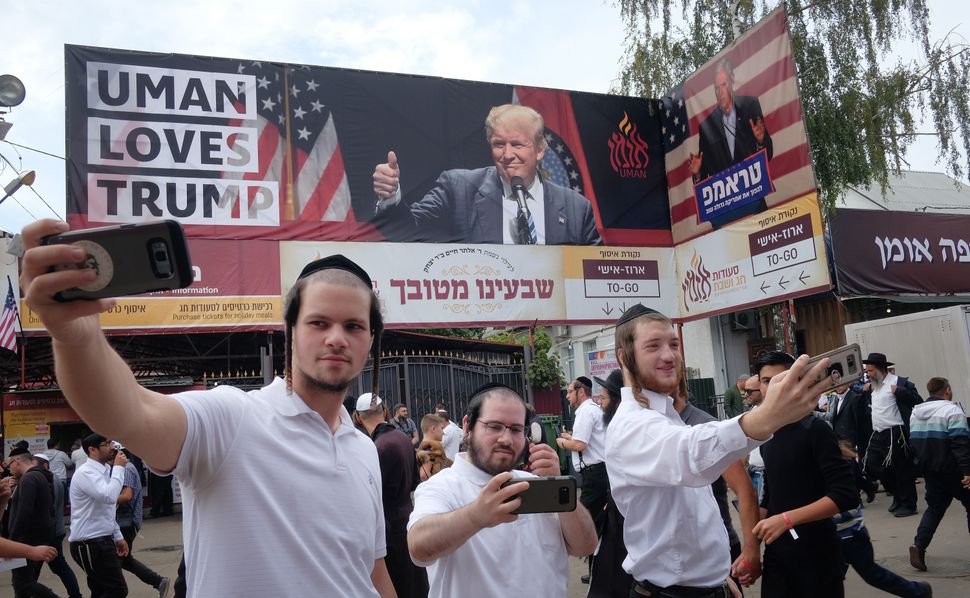 President Trump’s popularity in the Orthodox community is well documented. Though he only won 55% of the community’s votes in 2016, his approval since the election has skyrocketed.

Many view this support as tied to specific policies, like moving the embassy to Jerusalem and recognizing Israeli sovereignty over the Golan, policies that appeal to the pro-Israel Orthodox community. In other words, Trump garnered Orthodox support in spite of his moral and personal failings.

But there’s at least some evidence to suggest that it is precisely Trump’s personal views — specifically, his views about women — that might be drawing some of his Orthodox support. Factor in another head of state whom Orthodox Jews have found common cause with in opposition to the rest of the Jewish community — Hungarian Prime Minister Viktor Orban — and another theory emerges: that there is a deeper, more troubling, connection between Orthodoxy and the wave of right-wing populism on the rise around the world.

Greeting Orban at the White House earlier this week, President Trump said, “I know he’s a tough man, but he’s a respected man.” Regarding Trump, Orban responded, “We have some similar approaches.”

Like Trump, Orban has cultivated a close relationship with the Netanyahu government. He has also dedicated government resources to building and restoring several Jewish sites, including synagogues. He has also contributed to the growing right-wing anti-Semitism and Holocaust denial within his base of support, just like Trump, by whipping up anti-Semitic sentiment against George Soros — just like Trump.

The explicit goal of these policies is to obviate the need for immigrants, especially from the Middle East countries that Orban and his spokesmen identify as being sources of rapists and violent criminals. His language is similar to how President Trump describes Latin and South American immigrants and refugees, and it is therefore telling that one of the explicit rationales behind the wave of anti-abortion legislation across the country is raising the American birth rate.

In addition to the obvious racism at work here, there is also something else: a return to gender norms that had some pretty ugly and even dangerous underpinnings. It’s a view that’s quite prevalent on the conservative right. Take, for example, a series of 2007 radio appearances by pro-Trump, pro-life, and anti-immigration anchor Tucker Carlson. In one clip, sizing up the sexual desirability and accessibility of a Miss Teen USA contestant, Carlson remarked, “She’s like a wounded gazelle. She’s separated from the herd.” As feminist writer Jill Filipovich observed, “This is not even the language of desire. It’s the language of conquest, dehumanization, and rape.”

In fact, Carlson had been salivating over the thought of preying on the same teenagers that Donald Trump himself had likely ogled in the flesh. A Rolling Stone exposé described Trump walking unannounced into the Miss Teen USA backstage dressing area, where girls as young as 15 were shocked by his presence as they were changing into their swimsuits. In 2005, Trump bragged to Howard Stern, “I’m allowed to go in because I’m the owner of the pageant… You know, they’re standing there with no clothes.”

In other words, when Trump and his most influential supporters speak about “protecting” women, they are not coming from a place of respecting them as human beings but rather a feeling of objectification, entitlement, and possession.

And Trump gets support from the Orthodox not despite this view but because of it. For this same perspective is prevalent in the Orthodox community, transmitted by respected rabbis to Orthodox high school and gap-year seminary students.

In the late 1990s and early 2000s, a Jerusalem-based outreach rabbi, David Orlofsky, achieved a sort of viral infamy for his Jerusalem gap-year girls’ seminary lecture entitled “Platonic Relationships.” His thesis, delivered in a Louis CK-style cadence, was that platonic relationships are a fiction. In the end, Orlofsky argued, even the most religiously observant and gallant boy is hard-wired to see that friendship as a first stage towards sexual conquest. Even the most otherwise intelligent and perceptive girl, on the other hand, is hard-wired to be gullible enough to be swept along for the ride. Or, in his own words, “Have you ever noticed how guys don’t usually have platonic relationships with girls they don’t find attractive?”

Orlofsky’s charisma made him a presence on the school and synagogue speakers’ circuit across the Orthodox world. My wife, along with several hundred Modern Orthodox high school girls in New Jersey, remembers him warning them that their fathers were secretly leering at their pajama-clad friends from the next room when they hosted sleepovers in their homes — just like Trump at Miss Teen America.

Orlofsky’s goal for impressing upon girls the understanding that “guys are only partially human” and that even their own fathers are essentially sexual predators was to reinforce the necessity of the “protection” afforded by ever-more rigorously “modest” dress and behavior. In effect, he argued that Carlson’s dehumanizing attitude reflects what all men really think and feel about women and that all men would act like Donald Trump if they only had the power he shamelessly wields by dint of his wealth. His solution, though, was to entrench those very same men in positions of public power and authority.

None of this is to say that Trump and Orban have not been supportive of many Orthodox communal priorities. But when Orthodox Jews laud Donald Trump for being “politically incorrect,” they are probably not only referring to policy positions. In the words of a European expert on anti-Semitism explaining why most Jews in Hungary abhor Orban while the Orthodox do not, “Chabad can embody the Jews in the way Fidesz want them to be… very traditional and conservative in outlook.”

These right-wing populist leaders may resonate so strongly within the Orthodox community because they are made-to-order prooftexts for a social and religious framework built around entrenching men in positions of power.

At the end of the day, it should not be hard to emphatically reject the outrageously vile things that Tucker Carlson has said or that Trump has done. The challenge is following through on that rejection, and articulate an Orthodox Judaism around their opposite: respect for the inherent dignity and humanity of each person: man, woman, native citizen, or refugee alike.

Rabbi Avraham Bronstein is rabbi of The Hampton Synagogue in Westhampton Beach, NY. Follow him on Twitter @AvBronstein.