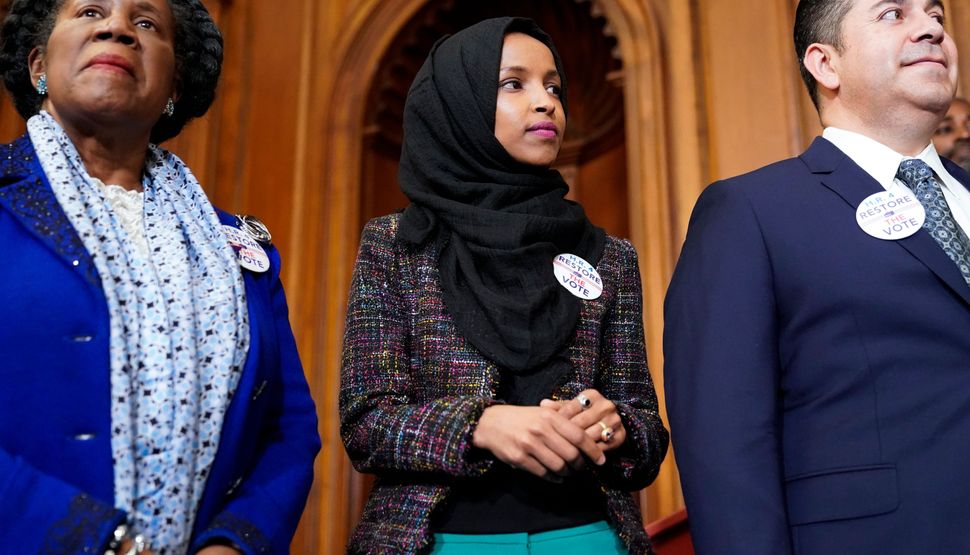 In what has now become a weekly ritual, Ilhan Omar is once again the center of attention for her ruminations on Israel and its supporters in the United States.

Omar’s statement that “I want to talk about the political influence in this country that says it is OK for people to push for allegiance to a foreign country” was a new spin on her critique of the U.S.-Israel relationship by introducing the explicit charge that people – presumably AIPAC or pro-Israel Americans, based on her previous comments in this ongoing thread – are pressuring members of Congress not to merely support Israel but to pledge fealty to it.

When Congresswoman Nita Lowey tweeted, “I am saddened that Rep. Omar continues to mischaracterize support for Israel,” Omar immediately returned to questions of allegiance, tweeting back at Lowey, “I should not be expected to have allegiance/pledge support to a foreign country in order to serve my country in Congress or serve on committee.”

Lawmakers must be able to debate w/o prejudice or bigotry. I am saddened that Rep. [Omar](https://forward.com/opinion/420269/for-jews-ilhan-omars-attack-against-allegiance-to-israel-is-all-too/) continues to mischaracterize support for [Israel](https://forward.com/opinion/418463/stop-calling-for-israels-destruction-and-well-stop-demanding-you/). I urge her to retract this statement and engage in further dialogue with the Jewish community on why these comments are so hurtful.

Our democracy is built on debate, Congresswoman! I should not be expected to have allegiance/pledge support to a foreign country in order to serve my country in Congress or serve on committee. The people of the 5th elected me to serve their interest. I am sure we agree on that! https://t.co/gglAS4FVJW

For many Democrats in Congress, Omar’s talk of allegiance and pledges, rather than a straightforward critique of U.S. policy in support of Israel, carries the distinct and unpleasant odor of classic anti-Semitic charges of rootless Jews who are disloyal to their native countries in service of some higher and conspiratorial pan-Jewish agenda.

It is difficult, in fact, to think of a more easily identifiable anti-Semitic canard than the dual loyalty one, which is what led the House to consider a resolution rejecting anti-Semitism and that specifically calls out the dual loyalty charge — not only when utilized against Jews, but against Catholics, Japanese-Americans, and Muslims too. The resolution does not mention Omar by name, yet it is clear that it is a response to her recent comments.

It is not surprising that the debate over Omar’s comments, what she intended to convey, and about whom she was speaking is raging. Some — including me — see her comments as directed squarely at American Jews and accusing them of dual loyalty, and some see her comments as being a straightforward critique of how U.S. policy toward Israel is developed and critics of Israel allegedly punished.

Her opponents see her repeatedly straying from what could easily be a full-throated jeremiad against staunch support for Israel into charges of buying congressmen and dual loyalty, while her supporters see her as the latest victim of a campaign to tar as anti-Semitic anyone who questions Israel, and particularly a women of color or a Muslim. This debate is not going to be resolved any time soon.

Omar’s House colleague Alexandria Ocasio-Cortez raised the issue of the House resolution on Twitter, first wondering why Omar is singled out but that similar reprimands are not sought for members of Congress who go after other communities – a perfectly logical question and one that is undoubtedly painful and worrisome to members of Congress from other minority communities.

AOC continued, however, tweeting “If House leadership is creating a standard & committing to calling a resolution for every incident – whether it’s the Congressional Black Caucus, CHC, etc, then thats a clear way to address the issue & we can all understand. But if they’re not, I think it’s valid to ask why not.”

If House leadership is creating a standard & committing to calling a resolution for every incident – whether it’s the Congressional Black Caucus, CHC, etc, then thats a clear way to address the issue & we can all understand.

But if they’re not, I think it’s valid to ask why not.

And that is precisely why many American Jews have a hair-trigger sensitivity to the Israel conversation. It is a demonstration of just how easily we get from Point A, which is criticism of Israel that has an unmistakable anti-Semitic tinge, to Point B, which is questioning whether anti-Semitism can stand alone in being singled out as uniquely worthy of condemnation or whether it must be subject to the intersectionality litmus test.

For members of the world’s longest and most extensively persecuted minority, it is obvious that anti-Semitism is in a class by itself, the only hatred of a group that bridges the gap between the far right and the far left. But that such classification is now open to question — even in the gentle way that Ocasio-Cortez did it — is a reminder that conflation of Israel and anti-Semitism is used on both sides to shut down debate.

Anti-Semitism is used on the right to decry critics of Israel, but criticism of Israel is used on the left to make anti-Semitism acceptable. Unlike Omar, who at this point has exhausted any benefit of the doubt regarding her intentions, Ocasio-Cortez is clearly not brushing away anti-Semitism and has said nothing to intimate that Omar’s words are not problematic in their own right.

But the entire episode is a textbook demonstration of the troubling dynamic that has taken hold in progressive circles that leads from taking on Israeli policies to wielding classical anti-Semitic charges that are cheered on because the person making them doesn’t ever go so far as to use the word Jew.

There needs to be space to cogently criticize U.S. foreign policy and to cogently criticize Israel itself. I find it incumbent on Israel’s supporters, like me, to make sure that space exists by rejecting the conflation of anti-Semitism and criticism of Israel, since to do otherwise cheapens anti-Semitism and only makes criticism of Israel grow. But the other side of that coin is that Israel’s opponents must not weaponize critiques of Israel to inoculate themselves and those in their camp from anti-Semitism.

Not only it is an odious tactic in its own right since it opens the door to acceptance of anti-Semitism as the price of doing business when criticizing Israel, it risks further alienating Jews from their naturally progressive politics in large numbers. If one of the historically staunchest groups that makes up the liberal and progressive coalition in this country is increasingly feeling unwelcome because of anti-Semitism dressed up in now-fashionable anti-Israel clothing, then something is truly rotten.