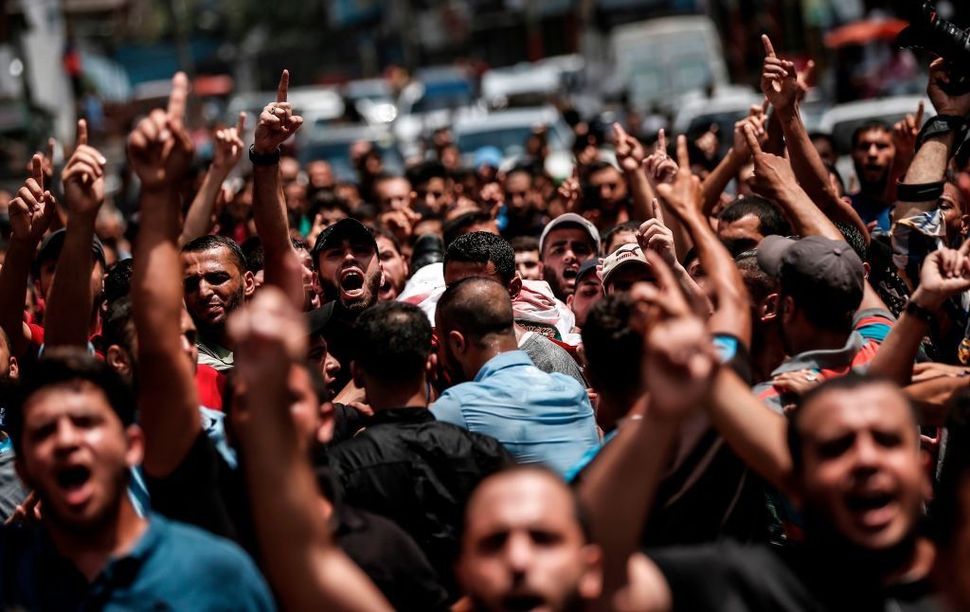 Palestinian mourners carry the body of a Hamas militant killed by Israeli fire, during his funeral in Jabalia, in the northern Gaza Strip, on August 7, 2018 Image by Getty Images

The Israelis and Palestinians are reaching an inflection point. The Oslo Accords, which charted a path forward to a two-state solution, effectively collapsed at the end of John Kerry’s intensive negotiations during the Obama Administration.

President Trump has made a series of significant decisions, starting with the move of the U.S. Embassy to Jerusalem and continuing to last week’s announcement to cut $200 million in assistance to the Palestinians.

There is wide speculation that the Trump Administration will defund the United Nations Relief and Works Agency for Palestine Refugees in the Near East in the West Bank and unilaterally re-define who qualifies for refugee status to those Palestinians who were actually displaced between 1948 and 1967.

Disruption of political sclerosis can invigorate positive change, which is desperately needed in a region that has witnessed three wars in Gaza in the last decade. But the Trump Plan represents real long-term danger for stability and security in the Levant.

The U.S. Embassy move to Jerusalem did not destabilize the broader Middle East as many analysts warned it would. But the decision has marginalized the U.S. as a fair broker between parties and set a trajectory for U.S. engagement that is even more worrisome.

The White House’s announcement last week that it would cut $200 million in aid to the Palestinians creates a political vacuum which favors Hamas and other rejectionists.

During the Gaza disengagement in 2005 and in the immediate aftermath of the Hamas victory in the 2006 Palestinian Legislative Council elections, the U.S. and Israel asserted economic pressure to yield political change. The goal was to squeeze Hamas until it moderated or failed. Instead, Hamas consolidated political and economic power by completely overwhelming traditional Palestinian influencers — the business community, traders, the professional class and civil society. Ironically, Hamas is now the centrist power in Gaza, only challenged by Islamic Jihad and a nascent ISIS.

At the same time, in the northern West Bank city of Jenin, the U.S. and Israel worked with the Palestinian private sector under the theory that economic engagement and private sector trade would yield political change.

In withdrawing $200 million from Gaza and the West Bank with expiring fiscal year 2017 funds, the White House is turning its back on the Palestinian people, increasing security risks to Israel, undermining the private sector on both sides of the Green Line and limiting America’s ability to alleviate other friction points between the parties.

The result is that Hamas has more room to consolidate power, particularly against potential moderate actors.

History has demonstrated that a sustained economic embargo on Hamas over the past thirteen years has not restrained its ability to develop and launch increasingly more sophisticated rockets at Israel. As U.S. NGOs in Gaza begin to lay off hundreds of staff and close down operations, the Trump Administration has effectively vacated American influence in one of the most contested, complicated crises on earth.

Whither the Palestinian Authority?

In a post-Oslo world, the Palestinian Authority has lost legitimacy and purpose. Historically, Prime Minister Salam Fayyad would not accept security assistance independent of economic assistance. The PA would not be the outsourced security services of the Israeli Defense Forces; instead, it sought to build a state which rested on three pillars: governance, economic opportunity and security.

With no political horizon and reduced economic opportunity, the PA is devolving into the IDF’s gendarmerie on the streets of Ramallah, Hebron and Nablus.

It is too early to tell if the PA Prime Minister Hamdallah will accept the Trump Administration’s continued security assistance in the light of aid cuts and the U.S. Embassy’s move to Jerusalem, but there is a real risk that security cooperation between the Israelis and Palestinians will begin to wind down. The stress on the PA increases dramatically as the White House considers defunding UNRWA in the West Bank.

Without question, UNRWA is in dire need of reform. In many ways, continued welfare payments, including to Palestinian refugees in Lebanon and Jordan, subsidize dysfunction and failure.

But UNRWA also provides education, health and social services in the West Bank. An immediate shutdown of UNRWA operations in the West Bank will shift financial responsibility for these services and entitlements to the PA, an additional burden the fiscally-strapped PA simply cannot afford.

The weight of the fallout within Palestinian political circles of the U.S. Embassy’s move to Jerusalem, the withdrawal of U.S. assistance to the Palestinian people and the transfer of UNRWA entitlement payments for close to one million people in the West Bank may very well lead to the collapse of the PA.

Even if the PA struggles through the financial challenges, Palestinian domestic pressure on the PA may cause it to begin dismantling operations.

In a PA collapse, Palestinians would likely transfer the health system, then education and finally security to Israel — or worse, Hamas — over the next year to 18 months. If the burden falls on the Israeli taxpayers, they will not only be required to dig a little deeper to pay for Palestinian education and health care systems in Jenin, Qalqilya and Hebron, but they should be prepared to send their sons and daughters to Area A, the heart of Palestinian controlled territory.

Though skeptics may consider a Hamas replacement of the PA as highly unlikely, history has shown unlikely events happen — the 2006 election of Hamas, the 2012 election of the Muslim Brotherhood in Egypt, and, finally, the 2016 election of President Trump.

Currently, the international community subsidizes the post Oslo status quo, which by all accounts is failing. With no political horizon and an effective disengagement by the White House, the U.S. is vacating leadership and influence, thus precipitating a historic disruption of monumental consequence.

Dave Harden is the Managing Director of the Georgetown Strategy Group, former USAID Assistant Administrator, and one of the longest serving American diplomats in Israel who led the assistance mission to the West Bank and Gaza for more than a decade.