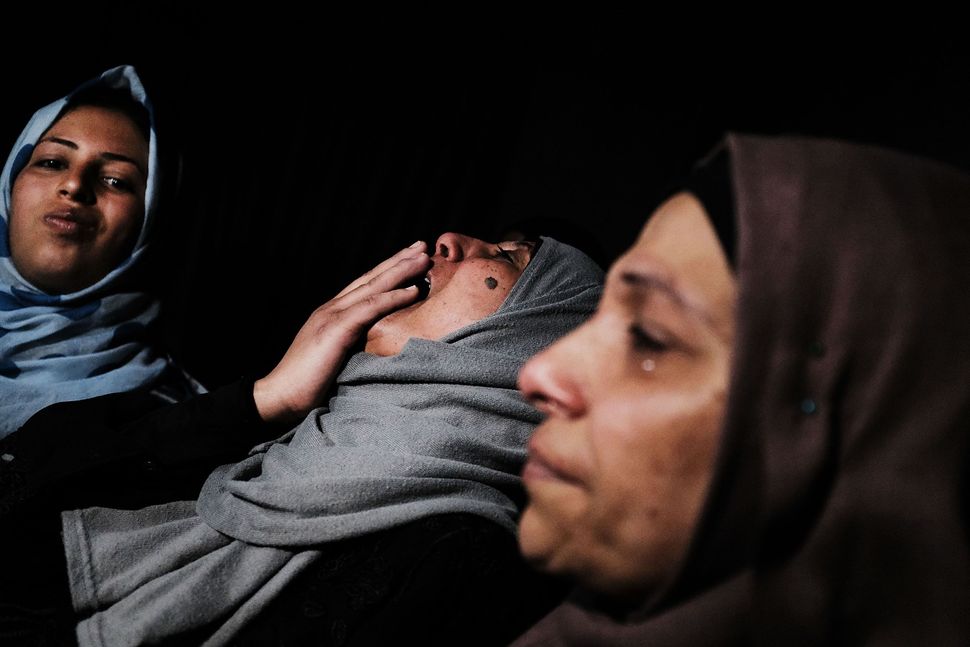 On May 14, Israeli soldiers shot and killed 60 Palestinians and wounded over 2,500 while they were demonstrating inside Gaza. That fact is not in dispute. But according to Matti Friedman, a Canadian-Israeli author who lives in Jerusalem, neither the snipers who chose their targets and pulled the triggers nor the officers who ordered them to open fire are responsible for the deaths of the Palestinians.

In a May 16 New York Times opinion piece, Friedman claims that those people died because they allowed themselves to be sacrificed so that Hamas could use their images for propaganda purposes.

Unsurprisingly, given that his argument is lifted almost in its entirety from the Foreign Ministry’s talking points, which it began to distribute well ahead of the first Gaza demonstration at the end of March, the Israeli embassy in DC tweeted the article with an approving comment.

.@MattiFriedman explains the ways which #Hamas manipulates the media: “Hamas understood early that the civilian death toll was driving intl outrage not at Hamas but at Israel, & that this, not IEDs or ambushes, was the most important weapon in its arsenal” https://t.co/pXDmUmfIX2

The title of Friedman’s piece is “Falling for Hamas’s Split Screen Fallacy;” it refers to the widely circulated juxtaposed images of a stylishly dressed Ivanka Trump at the inauguration ceremony for the new U.S. embassy in Jerusalem on Monday, alongside a Pieta-like image of a Palestinian man at the Gaza demonstration carrying a wounded demonstrator, his head lolling and his arm dangling.

The Jerusalem ceremony with its well-heeled participants and the deadly demonstration in Gaza, just an hour’s drive away, took place simultaneously. “The split screen, and the idea that people were dying in Gaza because of Donald Trump, was what Hamas was looking for,” writes Friedman. He adds: “The press coverage on Monday was a major Hamas success in a war whose battlefield isn’t really Gaza, but the brains of foreign audiences.”

In fact, the May 14 demonstration was planned and announced many weeks ago. The date was chosen to coincide with the eve of Nakba Day, the day on which Palestinians mark their exile 70 years ago from the land now called Israel. It was not, as Friedman writes, chosen to coincide with the inauguration of the U.S. embassy in Jerusalem. One might reasonably ask why the Israelis chose that sensitive date for the ceremony.

“If the most effective weapon in a military campaign is pictures of civilian casualties, Hamas seems to have concluded, there’s no need for a campaign at all,” Friedman goes on. “All you need to do is get people killed on camera.”

In other words, the Palestinians of Gaza are not demonstrating because they are desperate. They have no real grievances. They are just pawns of Hamas, “sheeple” who offer up their bodies as fodder for propaganda; to what end, Friedman, does not specify.

This analysis is — and there really is no other word to describe it — racist. It strips Palestinians of agency; it implies that they do not value their own lives. This is not journalism; it is Israeli government propaganda. Friedman finds nothing to criticize in the Israeli army’s use of deadly force against unarmed civilians. Nowhere does he mention the man-made humanitarian crisis that Israel could easily alleviate. Only Hamas is responsible — not Israeli policy, which has kept Gaza under a choking military closure for 11 years.

For the record (and at the risk of repeating colleagues who have written op-eds on Gaza for this paper), the situation in Gaza is as follows: a population of 2 million is living in an open-air prison with almost no electricity or drinkable water, with 60 percent unemployment, about 80 percent in dire poverty, with no freedom of movement, no hope, no future. Depression levels among children are over 50 percent.

As I wrote for this newspaper just over a month ago, the army is fully aware that the situation in Gaza is desperate. Palestinians from Gaza have been slipping into Israel for years, with full knowledge of the Israeli military and intelligence services. The fence and wall are more porous than Israel would have people believe. And yet, none of these infiltrators, who come through the fence at a rate of several per month, have attempted to commit a violent act on Israelis. They are just desperate individuals looking for work, or, if they are caught, at least a warm bed and three meals a day in an Israeli jail.

Army intelligence has been warning the Israeli political echelon for several years that Gaza is on the edge of an explosion. In July 2017 Major General Sami Turgeman, the former head of the IDF’s Southern Command told Channel 2 News that it was “completely clear that severe economic hardship creates potential for escalation, potential for a situation where one has nothing to lose any more.” To pre-empt the escalation, he recommended that Israel open the Gaza crossings, allow Palestinians to come into Israel for work, lift restrictions on the goods Gaza could import and export, and help Hamas in easing the sewage, water and electricity crises. The army did not act on any of these recommendations, which have been repeated by Military Intelligence, the Shin Bet and several prominent politicians.

And yet, for over three years, Matti Friedman has been trying to position himself as a teller of hard truths, or rather, of a narrative that appeals to pro-Israel Jews, by repeating the claim that while he was a desk editor for the Associated Press during the 2008-9 Israeli military operation against Gaza, he was forced to censor a report about Hamas fighters mingling with civilians at a Gaza hospital. This, claims Friedman, is evidence that the international media is hopelessly biased against Israel.

The AP bureau chief at the time, a Jewish American, responded in detail to Friedman’s charges, which he bluntly termed “lies.” In a sharply-worded press release, the AP wrote of Friedman, “His arguments have been filled with distortions, half-truths and inaccuracies, both about the recent Gaza war and more distant events. His suggestion of AP bias against Israel is false. There’s no ‘narrative’ that says it is Israel that doesn’t want peace; the story of this century-long conflict is more complicated than that.”

But despite the AP’s thoroughly documented denials, Friedman continues to repeat his assertions, richly evident in his New York Times piece.

Some of the claims Friedman makes in the piece are wrong and some are silly. “Hamas understood early that the civilian death toll was driving international outrage not at Hamas but at Israel,” he writes, without explaining how he achieved this remarkable knowledge of Hamas’s thoughts and strategies from his perch in Jerusalem. He describes the 2008-9 war in Gaza as “a grim campaign similar to American efforts in Iraq, in which a modern military fought in crowded urban confines against fighters concealed among civilians.” This makes it sound as though Israeli soldiers and Hamas fighters were engaged in face-to-face combat, but in fact the IDF entered Gaza only in stage 2 of its campaign, after waging an aerial bombardment.

But it’s the moral failure that’s the worst part about this line of thinking. Israel’s population is four times that of Gaza. Imagine the reaction if 240 Israeli civilians were killed and 10,000 wounded in a single day in a military attack. Just the thought is unbearable.

How can one possibly justify killing 60 people, most of whom were picked off one by one by snipers, with the claim that they are members of Hamas? These are unarmed human beings with possibly dubious political ideas, not armed militants. Since when do we defend killing people for ideas or affiliations they might or might not have?

But Friedman barely glances at Gaza’s tragedy and its desperation. Instead, he lifts his nose and sniffs “propaganda,” holding the victims responsible for their own suffering and self-righteously telling Jews who disagree with him that they just don’t understand those people as well as he does.

If he were a white South African journalist in the 1980s using this language to describe black anti-apartheid activists, most intelligent readers would rightly have dismissed him as a racist. Let us be consistent in our worldview, rather than adjusting the lens of our compassion so that it blurs and distorts when we look through it at those we fear.

Lisa Goldman is a contributing editor to +972 Magazine, which she co-founded. She was a journalist in Israel and Palestine for a decade. She lives in Montreal. Follow her on Twitter, @lisang.

Correction: An earlier version of this piece incorrectly stated that the Israeli army did not have boots on the ground in Gaza during the 2008-9 war. We regret the error.