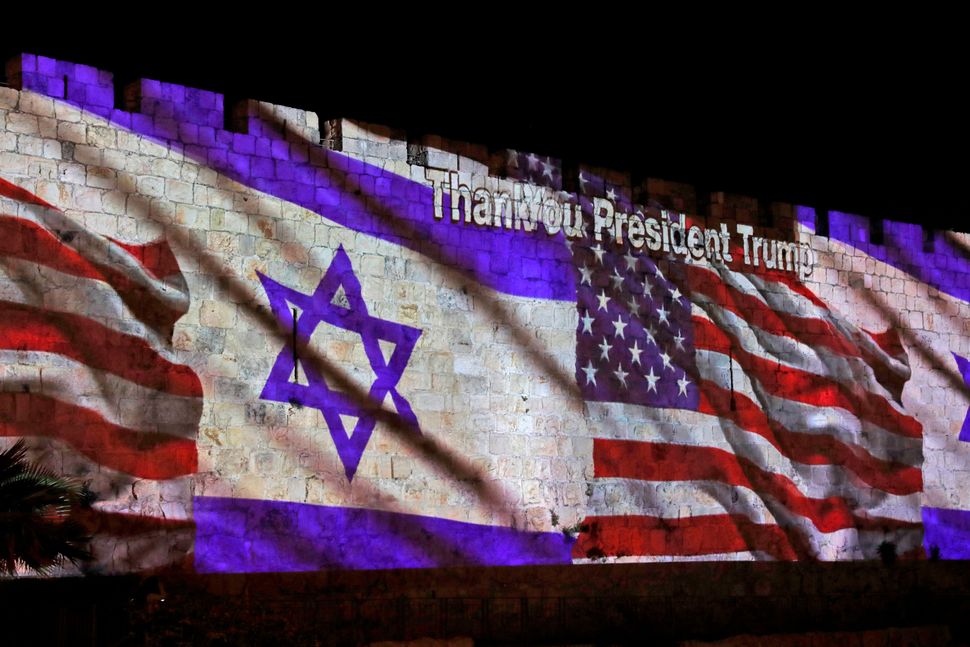 Jerusalem. It has been the center of Jewish prayer, longing, and hope for over 2,000 years.

It is where every generation of Jews has turned to, what all of our exiled people have dreamed of, and to where we finally returned as a free nation from the four corners of the world, battered but alive, to join the remnant that never left.

It didn’t matter who else thought we shouldn’t be there, or how badly we were treated. Jerusalem was part of the Jewish people. Even if no one acknowledged it, even if wasn’t yet the city of peace, even if we were barred from our holy places; for most Israelis, having even some of Jerusalem meant being home.

And while it stings that children born in Jerusalem have no country written on their U.S. passports, and it hurts that Eurovision wouldn’t say “Jerusalem” but only Israel, and though it rankles that UNESCO denies the Jewish history of Jerusalem, we don’t depend on anyone else’s approval, and we won’t let anyone separate us again.

Still, the idea of world recognition is appealing. The notion of legitimacy beckons. So, the choice of the United States to implement the 1995 decision to bring the embassy to Jerusalem is exciting.

I admit, I didn’t expect it, but when I drove through Jerusalem last night, the signs pointing the way to the new U.S. Embassy made me giddy.

I wish that moving the United States Embassy in recognition of Jerusalem as Israel’s capital was something I could celebrate with abandon.

And I wish I could relish the gathering of politicians and religious leaders, heaping praise on Israel. But, I’m ambivalent. I’m even uncomfortable.

Because for me, it is painful that the only president in the past 23 years willing to recognize our capital is Donald Trump, a man loathed far and wide. It’s upsetting that recognition of the Jewish people’s connection to Jerusalem is associated with a man known for racism, sexism, and incompetence. It forces many of us to be grateful to someone we want nothing to do with.

It also forces the question, what’s in it for him? Why now? The move seemed so rushed that it’s hard not to ask who or what is the real guiding force here. Are we just pawns in someone else’s long game? Watching the ceremony, it’s hard to not feel that the move was done more to please the Christian right than to recognize Jewish rights to Jerusalem.

Because the desire to be recognized by the world is so deep, many won’t ask these questions. They will simply take what they can get despite the way it’s being done. They will enjoy the recognition despite its association with Trump, and though many don’t know and others don’t care what Trump has done to earn his reputation, this decision will determine their perception of him and enable them to close their eyes to other things he does.

So too, I fear that those who hate Trump many will use this association to justify their rejection of Israel, even though our quest for legitimacy is a just one, and has been for millenia.

And so, while I am happy that the U.S. recognizes Jerusalem as Israel’s capital, that happiness is tempered. And while I do pray that peace will come to all the people of Jerusalem, I fear this might still take a while. Because while Jerusalem is many things to many people, it should never be used as a political pawn.

To my fellow Israelis, ​appreciate those who respect our return to our eternal home, but don’t abandon judgement in exchange for recognition.

To my fellow Americans, please allow us the right to a home and capital on our merit as a sovereign nation and judge us not on who approves it – or doesn’t.

And to the Palestinians, this land is generous enough to share. Let us show the world why Jerusalem is known as the City of Peace.