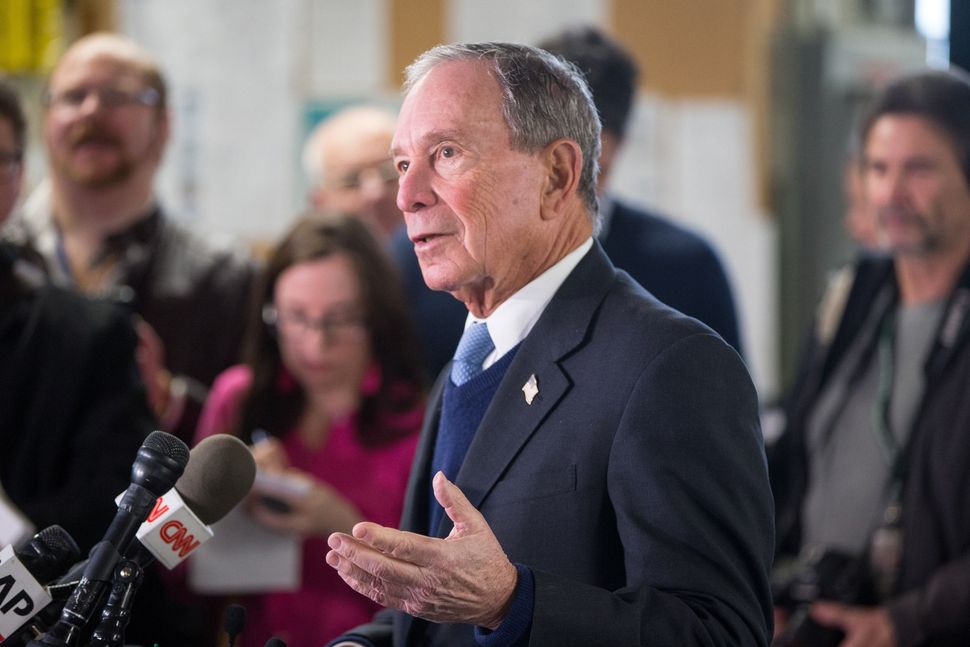 Democratic presidential candidate and former New York City mayor Mike Bloomberg spoke at length on Sunday about his relationship with Judaism and Israel and how it would affect his presidency.

Bloomberg, who would be the first Jewish president, made his remarks at the Aventura Turnberry Jewish Center in Miami at an event called “United for Mike.” His campaign described as a kickoff to a national outreach effort to Jewish Americans. Already this month, Bloomberg did similar events for other groups: “Women for Mike” in New York City and “Veterans and Military Families for Mike” in Fayetteville, North Carolina.

Here are the key takeaways from Bloomberg’s speech:

He played up his pro-Israel bona fides:

Bloomberg, one of the richest men in the world, highlighted his personal philanthropy in Israel, such as donations to build the Magen David Adom Blood Center and a wing of the Hadassah Hospital in Jerusalem. He also trumpeted his decision to fly on an El Al plane to Ben-Gurion International Airport during the Israel-Gaza war in 2014, in a show of support to Israel at a time when the federal government had banned American commercial airlines from Israel for safety reasons.

“So it’s with a personal attachment to Israel that I say: As president, I will always have Israel’s back. I will never impose conditions on our military aid, including missile defense – no matter who is Prime Minister. And I will never walk away from our commitment to guarantee Israel’s security.”

Some candidates, including Sanders, Sen. Elizabeth Warren of Massachusetts and former South Bend, Ind. Mayor Pete Buttigieg have floated the idea of putting conditions on American military aid to Israel.

He noted the rise of anti-Semitism – and tied it to attacks on other minorities:

Bloomberg noted the series of anti-Semitic attacks that have occurred in the United States over the last several years, including the Tree of Life synagogue in Pittsburgh (where his sister used to pray) and more recent attacks in Jersey City, N.J. and Brooklyn.

He noted that other minority groups have also seen increased threats, and proposed several policy changes: labeling hate crimes as domestic terrorism, expanding the Department of Education’s anti-bullying campaign, and ordering the FBI and Department of Justice to clamp down on violent extremists.

He also said there was “no single answer” to the rise in anti-Semitism, and said President Trump was not entirely to blame.

But he had a lot to say about Trump:

“When the President calls his supporters ‘real Americans’ — an echo of the language that nativists, anti-Semites, and the KKK used for many decades,— and when he is silent, and even supportive, through his words and tweets, as racist groups spread hate, he undermines our fundamental national values,” Bloomberg said.

He also blamed Trump for using Israel as a political “wedge issue,” which he said harmed bipartisan support and therefore endangered the Jewish state.

“If I am elected you will never have to choose between supporting Israel and supporting our values here at home,” he said. “I will defend both – because unlike this President, you and I know they are inextricably linked.”

He touched on Jewish tradition:

Bloomberg said that his parents instilled many Jewish values in him – including tikkun olam or repairing the world, and the obligations to help others and to “revere the miracle that is the state of Israel, which, for their generation, was a dream fulfilled before their very eyes.”

He also said that Jewish tradition teaches the importance of trusting in the law, and not in an individual ruler – citing the examples of the pharaoh who enslaved the Hebrews because he didn’t remember Joseph’s contributions to Egypt, and Moses’s introduction of the 10 Commandments after the incident of the Golden Calf. He also cited a verse from Leviticus: “Do not stand idly by while your neighbor’s blood is shed.”

He took a shot at Sanders:

Bloomberg was the last candidate to enter the race; he had said in March that he was not running, but changed his mind, reportedly because of concerns that Sanders or another progressive would get the nomination. In his speech, the billionaire criticized the democratic socialist.

“Now, I know I’m not the only Jewish candidate running for president,” Bloomberg said. “But I am the only one who doesn’t want to turn America into a kibbutz.”

Correction: A previous version of this article stated that Mike Bloomberg flew to Israel in 2014 on a private plane. In fact, he flew on an El Al flight.