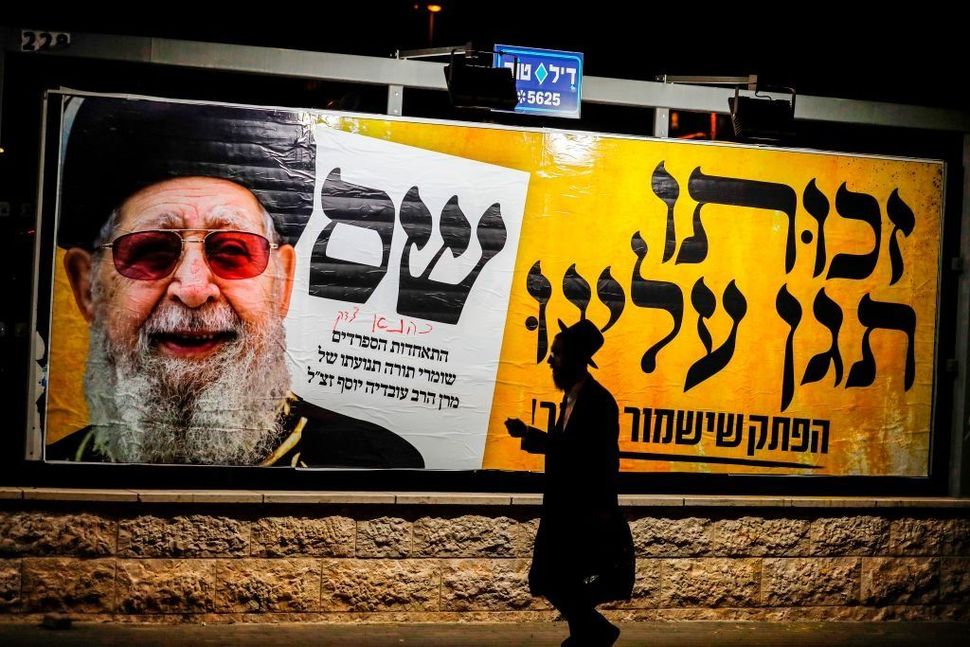 A Jewish man walks past a billboard promoting the Orthodox party Shas, showing the face of its late spiritual leader Rabbi Ovadia Yosef, with text in Hebrew reading “his virtue will protect us, the ballot will save you,” in Jerusalem on February 27, 2020. Image by AHMAD GHARABLI/AFP via Getty Images

The amulets included a picture of Shas’ late spiritual founder, Rabbi Ovadia Yosef, and came in a container with a Biblical quote about the Israelites surviving a plague along with the sentence ““Protection against plague: Corona – and all evils.”

It is illegal in Israel to offer blessings or curses to voters as part of an election campaign. The fine was levied by Israel’s Central Elections Committee.

Shas party is fined NIS 7,500 by the Central Election Committee 4 giving out Shabbat candles & amulets which say they protect against the corona virus alongside pictures of late Shas spiritual leader Rabbi Ovadia Yosef and promises that voting Shas will be protected from Corona. pic.twitter.com/Ng4M2xL9CC

According to the Post, the Central Elections Committee received reports of election-day shenanigans targeting multiple parties, including allegations of voter fraud, ballots being glued to each other, and false claims that parties had dropped out. The committee also ordered the ruling Likud party to stop using limousines to drive voters to the polls in Eilat.