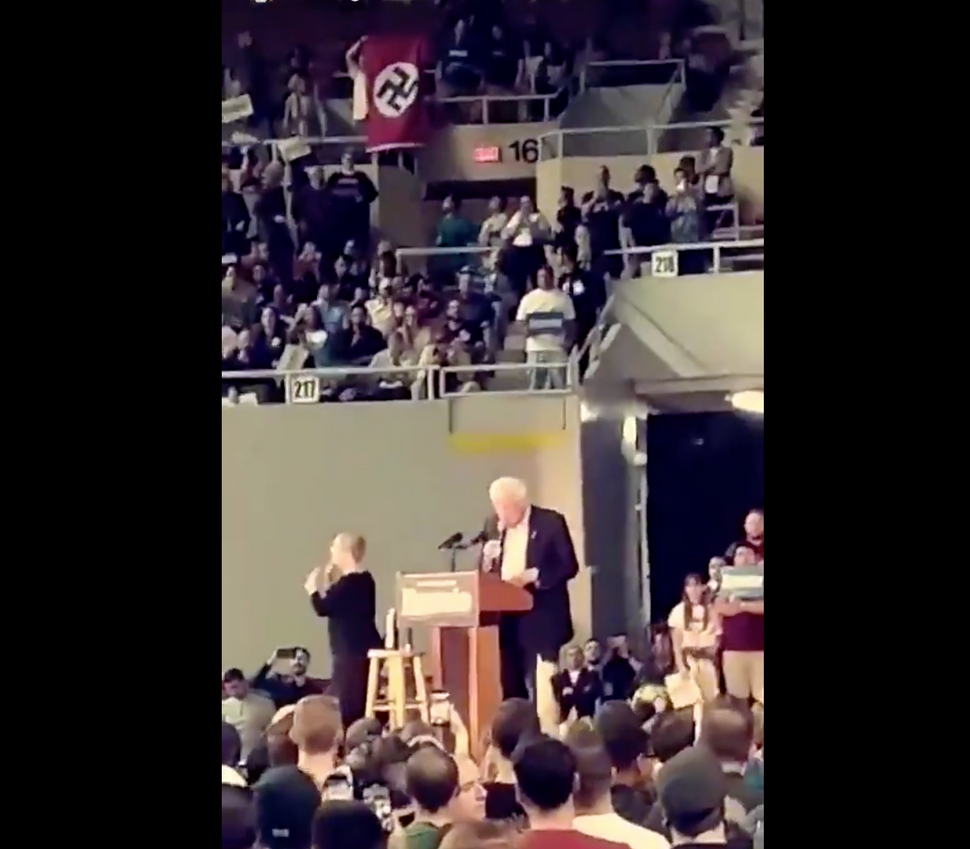 A Nazi flag is unfurled behind Bernie Sanders at a campaign event in Phoenix on Thursday, March 5, 2020. Image by Twitter/SiddakAhuja

Editor’s Note: Read an interview with one of the rally participants who encountered the man with the flag here.

“It was absolutely wild,” Brianna Westbrook, a national surrogate for the Sanders campaign, told The Washington Post. “I never thought I would have seen a swastika at a political event. It’s gross.”

Members of the crowd booed the protester, and those nearby him snatched the flag away from him. The protester was escorted from the premises by security.

Sanders did not appear to have seen the protester, who was positioned above and behind him. A spokesperson later told BuzzFeed News that Sanders had been informed of the incident and was “disturbed” by it.

He was escorted out by security forcespic.twitter.com/KOLhyJJFxZ

Sanders is Jewish, and has spoken about how his relatives were killed in the Holocaust.

The incident was condemned by the Anti-Defamation League. “Targeting a Jewish candidate with a Nazi flag represents a new level of depravity,” ADL CEO Jonathan Greenblatt tweeted. “There is no place for hate in politics. Disagree on issues, but all good people should flat out reject this kind of poison when it appears in the 2020 race.”

The ADL identified the protester as white supremacist Robert Sterkeson, a self-described “stunt activist” who often targets Jewish and Muslim events and posts video on YouTube or his website, BombIslam.com.

For example, in October 2018 — the day after the Tree of Life synagogue shooting, in which 11 Pittsburgh Jews were killed by a white nationalist — Sterkeson unfurled a Nazi flag at an Arizona hotel that was hosting a conference for the Jewish National Fund.