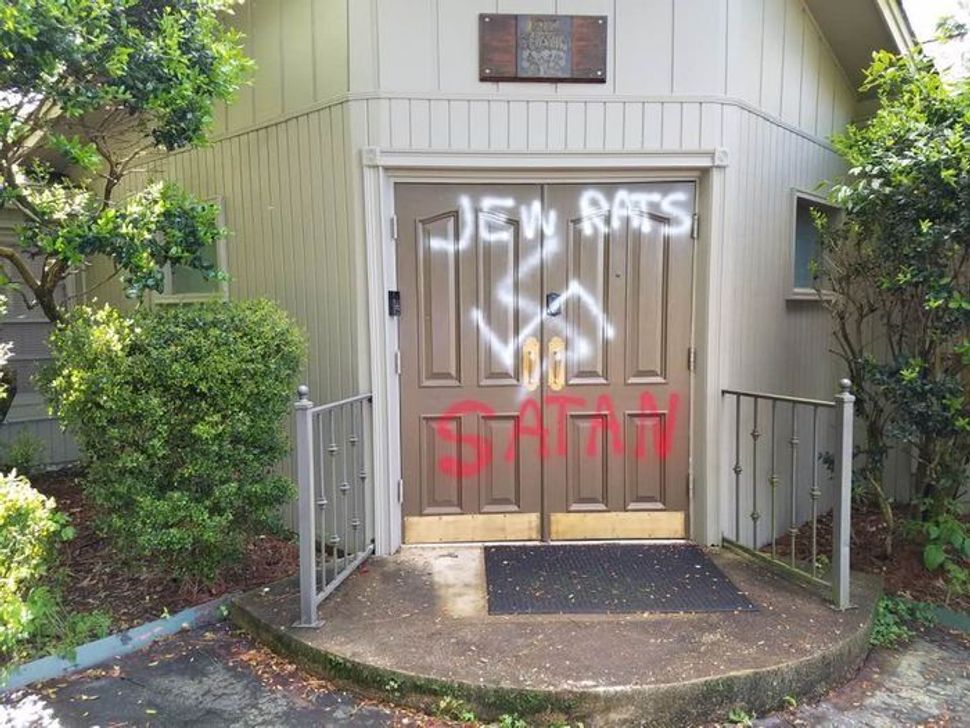 The entrance to the synagogue in Huntsville, Ala. Image by Courtesy of Laura King

A synagogue in Alabama was vandalized with anti-Semitic graffiti as Passover began, the local news website AL.com reported Thursday.

The graffiti on the property of Etz Chayim Congregation, a Conservative synagogue in Huntsville, included swastikas and the words “Jew scum” and “Holohoax.” Community leaders told AL.com that they believed the vandalism was timed to coincide with the holiday.

“This is like a smack in the face as we try to celebrate our freedom,” synagogue member Laura King told the website.

Mayor Tommy Battle condemned the vandalism. “As a City, and as an inclusive community, we stand side by side with our Jewish brothers and sisters and people of all faiths,” he said in a statement. “Any offense against one is an offense against all.”

Neighbors and community members joined in on Thursday to clean up the graffiti. Among those present was Pastor Rusty Nelson of The Rock Family Worship Center, along with his wife.

“We’re very connected with the Jewish community and are just here to stand in solidarity,” Nelson said. “Stuff like this just ticks me off.”

Huntsville, a city in northern Alabama with around 450,000 people in the metro area, has a Jewish population of around 750, according to the American Jewish Year Book.