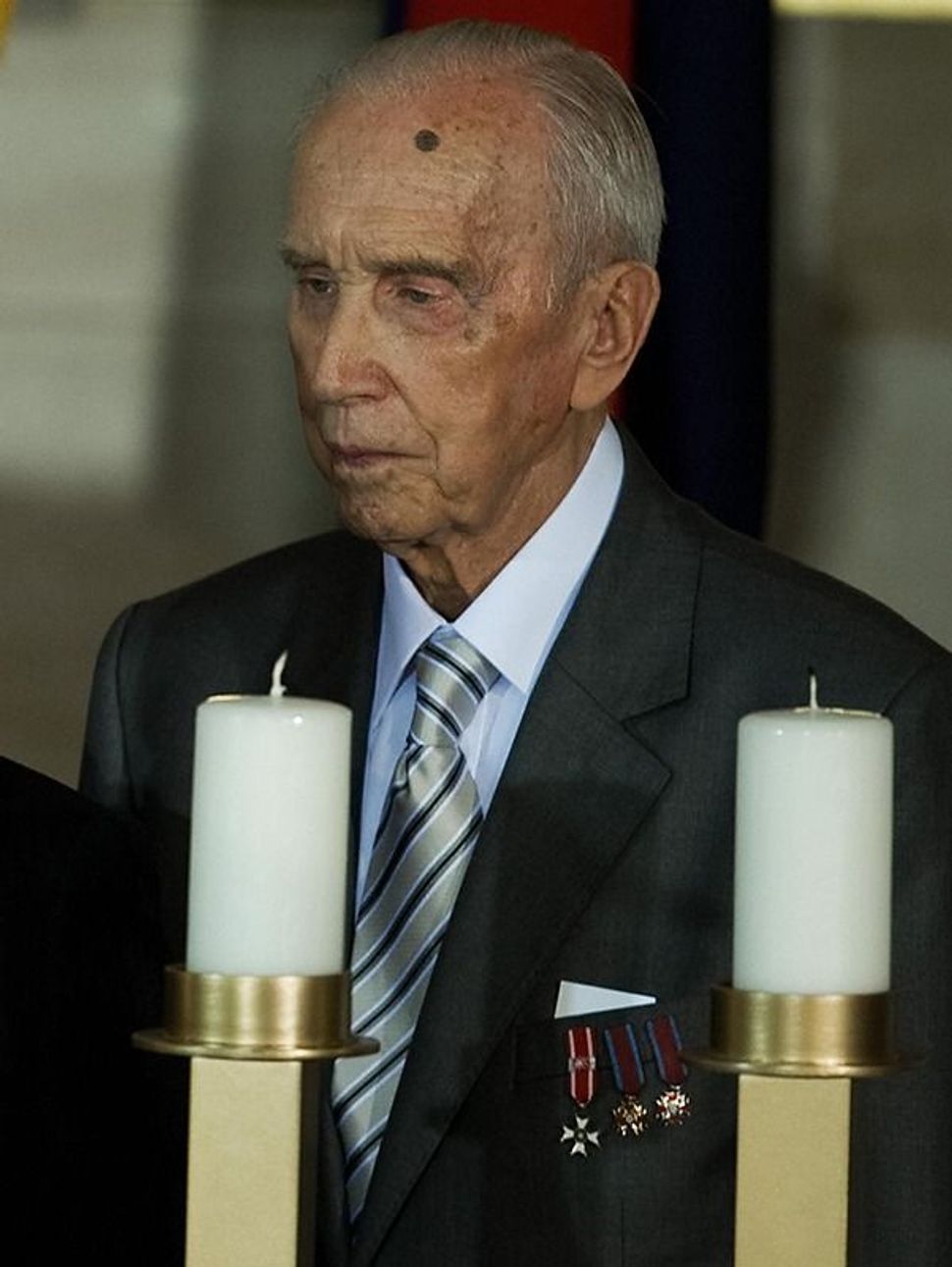 He was fortunate enough just to survive World War II. As a partisan fighter who specialized in smuggling arms in Nazi-occupied Poland, Walaszczyk assumed that the Gestapo would catch up with him at some point.

He just expected it to happen on the field of battle, not while he was in bed with his new girlfriend Irena.

In 1941, Walaszczyk (prounced Valash-chick) was in a room at the Grabowska Hotel in Warsaw when he heard Nazi officers outside their door.

“At first, I thought they were there for me, that someone talked,” Walaszczyk said in January.

But as he listened to them, it became clear that the Nazis were there to look for Jews, not members of the Polish resistance. Walaszczyk, who isn’t Jewish, was relieved at first.

Then he saw that his girlfriend was “completely terrified.” With the Gestapo barking orders outside, Irena told him that she was Jewish — a fact that risked not only her life but his as well if they were caught together in the same hotel room.

What followed was an unlikely and epic story of romance, heroism and brushes with Nazi capture. Walaszczyk’s efforts to save Irena and over 50 other Jews earned him the title Righteous Among the Nations — Israel’s term for non-Jews who risked their lives to save Jews from the Holocaust — in 2002.

At the Grabowska, Walaszczyk quickly devised a plan to keep himself and Irena alive.

He hid his girlfriend behind a wardrobe, locked the room’s door behind him, handed his ID to an officer in the corridor and headed to a shared bathroom where he pretended to vomit noisily. When the Germans, who searched the hotel room by room, reached the door that Walaszczyk had locked, the hotel owner explained to them that it belonged to the man puking his guts out.

The ruse saved the couple’s life, but it changed their relationship.

“We had been lucky, but I began bearing a grudge against Irena for not telling me about her situation, which risked both our lives,” said Walaszczyk, whose memory of events that transpired 80 years ago seems as crisp as though they happened to him last week.

Still, Walaszczyk was in love with Irena.

Walaszczyk knew Irena stood little chance of surviving without high-quality forged identity papers. She had a false ID, but it was of poor quality and would not stand up to even the most random inspection, he said.

A factory foreman in Warsaw who spoke excellent German, Walaszczyk was able to travel across Poland using his work as cover and distribute arms, cash and other supplies to resistance units hunkering down in various parts of Poland.

He decided to use contacts in the village of Regnow, situated between Warsaw and Lodz, to help with the papers for Irena.

“I told them the whole truth,” he said, “because if they decided to help, they’d be risking their lives.”

Three days later, with Irena living in a safe house in Warsaw that Walaszczyk had arranged for her, the Regnow mayor agreed to Walaszczyk’s request. But there was a catch: Walaszczyk would have to pay handsomely and marry Irena, whom he had met only a few weeks earlier, to make the fake identity story work.

“The decision was easy,” Walaszczyk recalled. “Irena was dear to me and her safety was extremely important to me.”

Walaszczyk and his new wife moved into an apartment in Warsaw and all seemed well for a while. But a few months later, in October 1941, Irena was arrested with 20 other Jewish women. They were friends from before the war who had gathered to alleviate their loneliness. All had false non-Jewish identities, but the gathering raised suspicion.

Again, Walaszczyk sprang into action: Using his underground contacts, he learned that the Polish police and German officers holding the women were amenable to bribes. There was a window of a few hours before the detainees were processed, and Walaszczyk used them.

He succeeded, but again there was a catch: He would need to pay for the release of all 21 women. The price was a hefty two pounds of gold that he had to produce within hours.

“It wasn’t easy,” said Walaszczyk, adding that he borrowed some money and leveraged his services for the partisan Polish Home Army to obtain the rest.

A second safe house was arranged for Irena, and “it was a good one,” Walaszczyk said.

In fact, the safe house was too good not to be used to save additional lives, he said. So Walaszczyk and Irena had two other women – Irena’s friend and nanny – move in. They all survived the war thanks to Walaszczyk’s actions.

But his love affair with Irena did not: Walaszczyk acknowledged that he had relationships with other women while he was married.

“Under these circumstances, you live every day like it’s your last one because you have to assume it is. And this has a lot of implications, also for a marriage,” he said.

Walaszczyk and Irena were divorced after liberation but stayed on good terms. As Walaszczyk tried to do business in communist Poland — he attempted to open a beer distillery — he also supported his former wife financially until she “stood on her own two feet,” as he put it.

An ardent anti-communist, Walaszczyk grew apart from Irena after she married a man who worked for the Soviet Union’s puppet regime in Poland.

Irena, who had a daughter with her second husband, asked to see Walaszczyk shortly before she passed away about 10 years ago. They met close to her death because she wanted to thank him one last time, he said.

Walaszczyk, who said he has had Jewish friends his whole life, also learned that Irena never told her daughter that she was Jewish.

“I was contacted by Irena’s grandchildren only recently, they had no idea about the story,” he said.

Walaszczyk remarried in 1950 and the couple had a son. They divorced and he remarried again, having another son with his third wife.

Throughout the war, Walaszczyk had also infiltrated the Jewish Ghetto of Warsaw to deliver food and drugs to his friends there.

“I couldn’t leave them behind,” he said. “We [the Home Army] were aware that our help was only symbolic. We also realized each visit could very well be the last thing we did in our life.”

Punishment for infiltrating the ghetto for non-Jews was death, typically immediately.

Walaszczyk additionally risked his life helping at least 30 other Jews by employing them at a factory deemed vital for the German war effort.

“I probably took on too many risks,” he said. “But helping people in real need has been something I couldn’t resist.”

An only child, Walaszczyk’s father died when he was 8, leaving his mother struggling financially and often at the mercy of strangers, Walaszczyk said.

“This detail in my biography may have had something to do with my choices,” he said.

Poland has the highest number of Righteous: 6,992 (the second-highest is Holland’s 5,778 saviors). But it also had thousands of Nazi collaborators, some of whom murdered Jews out of hatred and greed. The country also saw multiple anti-Semitic murderous pogroms after the Holocaust, such as in Kielce in 1946.

In recent years, Poland’s right-wing government has highlighted the actions of rescuers — a state museum for them was opened in 2016. At the same time, the government has been criticized for taking actions that are seen by some as a means to discourage open debate of the collaboration and betrayal that took place in wartime Poland. In 2018, the government passed legislation making it illegal to blame the Polish nation for Nazi crimes.

Walaszczyk supports venerating rescuers — “not because it feels nice, but because it shows younger people what needs to be done,” he said.

But Walaszczyk, whose wartime fears included being betrayed by other Poles, supports speaking about that, too.

“There were many rescuers. There were also traitors,” he said. “I know because some of my friends were killed because of traitors.

“We need to speak about both at the same time because the existence of each one of those groups helps us understand the significance of the actions of both.”

The post A love affair that made him risk everything: Poland’s oldest rescuer of Jews reveals an epic WWII story appeared first on Jewish Telegraphic Agency.