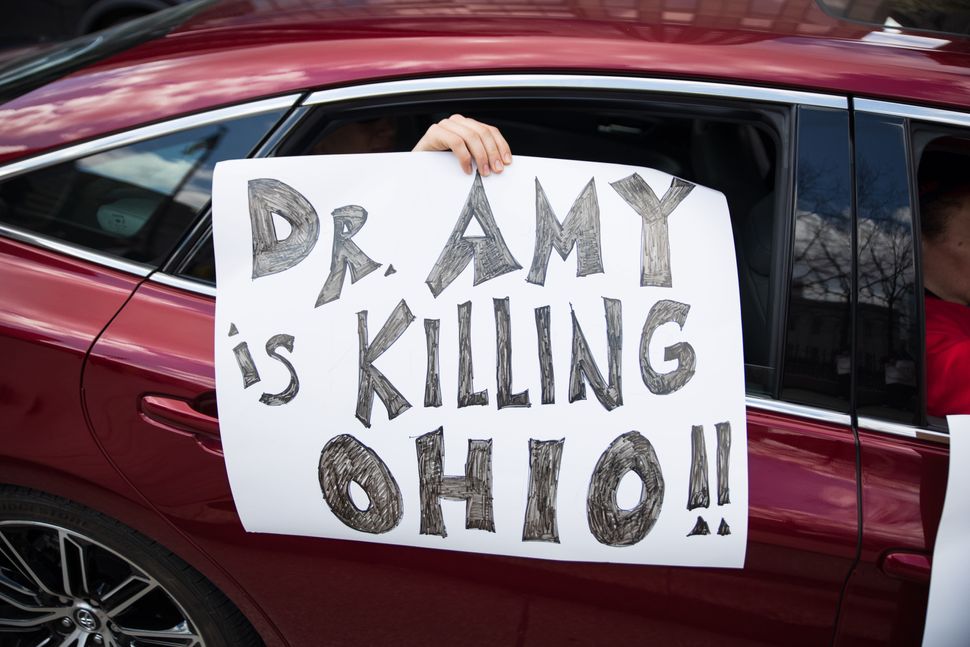 Protesters gathered in front of the home of Dr. Amy Acton, the head of Ohio’s health department, on Saturday afternoon to push back against state rules that are keeping businesses closed in order to stem the spread of the novel coronavirus.

Protesters and politicians who oppose the state rules have targeted Acton, who is Jewish, with critical signs and thinly veiled anti-Semitic rhetoric, especially in the wake of her announcement last week that state shutdown rules would be extended to May 29. Ohio has seen nearly 20,000 cases of Covid-19, with more than 1,000 deaths. The number of new cases has been rising for several days, according to data gathered by The New York Times.

On Friday morning, a state representative, Nino Vitale, called Acton a “globalist” in a post published on Facebook.

“Your basic human rights of life, liberty and the pursuit of happiness do not come from an unelected Globalist Health Director, who signed the order in the dark of night,” Vitale wrote.

Police told News 5 Cleveland that two officers watched the protest, which consisted of between 15-20 people and did not last long. Acton lives in Bexley, Ohio, a suburb of Columbus with a large Jewish population.

A freelance photographer who posted pictures of the protest to Twitter said that neighbors reported seeing people with semiautomatic rifles taking part in the protest.

A small group of protestors have gathered in front of the central Ohio home of Dr Amy Acton. Neighbors report several men walking up and down the street with assault weapons stating that there will be no violence. “For now” #ohio #amyacton #thisisamerica #asseenincbus pic.twitter.com/xC3HT0oVi6

On Sunday, doctors held a rally in support of her at the state capitol in Columbus. They stood six feet apart from one another, connected by a rope.

“We want Dr. Acton to know that doctors here in Ohio are absolutely behind her,” said Dr. Anita Somani, a member of the Ohio-based progressive activist group Physicians Action Network.