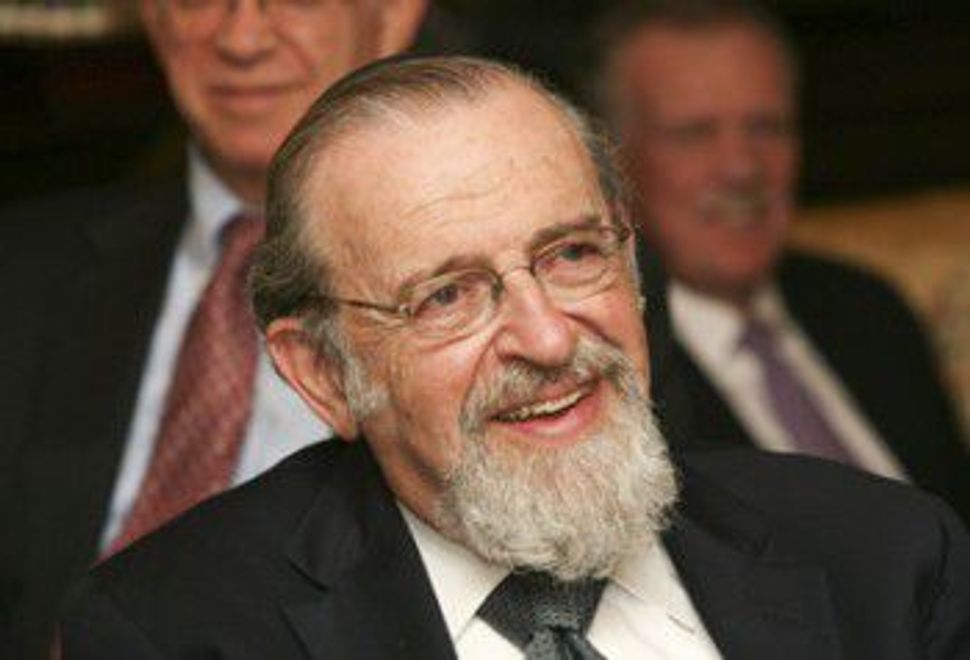 As president and chancellor of Y.U., Lamm helped rescue the institution from the financial brink in the late 1970s and rebuild it in the decades that followed into the flagship institution of Modern Orthodoxy. As a pulpit rabbi at Manhattan’s Jewish Center, in his writings on philosophy and Jewish law and as leader of Y.U.’s rabbinical school, Lamm also helped articulate an unabashed ideological basis for a movement that has often struggled to define itself.

“He was both an architect of and a spokesman for Modern Orthodoxy, and using his position at Y.U. as a perch he helped buttress that ideology in a substantial way,” said Rabbi J.J. Schachter, a professor of Jewish history and Jewish thought at Y.U. “He was uncomfortable with the word ‘modern,’ so he invented the word ‘centrist’ to describe his brand of Orthodoxy – between the extremes of totally favoring contemporary culture on the one hand and totally rejecting contemporary culture on the other.”

His reputation, however, was marred by his admission, both to a Forward reporter in 2012 and in his 2013 resignation letter, that he was aware of claims of sexual abuse by staff at Yeshiva University, and that the school allowed those people to quietly leave and accept positions elsewhere that kept them in contact with children. In an editorial, the Forward wrote that Lamm’s letter “added back some luster to a legacy sadly tarnished by the abuse scandal that occurred at Modern Orthodoxy’s flagship educational institution under his watch.”

In an interview in 2012, Lamm admitted that there were allegations of abuse in Yeshiva University’s high school, college and graduate school. Those claims would lead to multiple lawsuits against Yeshiva University, including one filed last year which named Lamm as a defendant.

Lamm expressed his regret for his role in covering up the abuses.

“We are all human,” Lamm told Forward reporter Paul Berger in 2012. “Show me anyone who is a human being who has not made a mistake.”

Lamm had a commanding wit and a poet’s ear for the spoken word. His sermons were widely admired, and he was as quick with a pun as he was with a religious homily.

In addition to being steeped in Jewish law and literature, Lamm was well-versed in history, philosophy and science. He earned his undergraduate degree from Yeshiva College in chemistry — he was the valedictorian of the Class of ’49 — and did some graduate work in chemistry at the Polytechnic Institute of Brooklyn. He also worked on a munitions research project during Israel’s 1948 War of Independence under the direction of Ernst Bergmann, who later became head of the Israel Atomic Energy Commission.

Ultimately Lamm was destined for a different kind of scholarship. One of his points of pride was that he was the only student to obtain both rabbinic ordination (1951) and a doctorate in Jewish philosophy (1966) under the tutelage of Rabbi Joseph B. Soloveitchik, the 20th-century luminary of Modern Orthodoxy, according to Lamm’s son-in-law, Rabbi Mark Dratch.

“The greatest asset of his leadership was leadership through ideas — through speaking and through writing. He wasn’t afraid to take a stand,” said Dratch, the executive vice president of the nation’s largest centrist association of Orthodox rabbis, the Rabbinical Council of America.

One of four children, Lamm was born in 1927 in Williamsburg, Brooklyn. His father, Samuel, had an odd assortment of jobs, including umbrella salesman and kosher inspector for New York state. His mother, the former Pearl Baumol, hailed from an illustrious rabbinic family.

Lamm’s maternal grandfather, Yehoshua Baumol, was the scion of a long line of rabbis in Poland and was himself ordained at the age of 13. It was Baumol who encouraged his precocious grandson to leave Mesivta Torah Vodaath, the Brooklyn institution he attended for elementary and high school, and go to Yeshiva College in Manhattan, where Soloveitchik would become his mentor.

Lamm’s first pulpit job was in Springfield, Massachusetts, at a time when when Orthodoxy was struggling for adherents. Even Lamm’s own synagogue had congregants who would work on the Sabbath after going to services.

While in Springfield, Lamm founded an Orthodox scholarly journal, Tradition, that dealt with contemporary matters of Jewish law and reflected his position between the Orthodox and secular worlds. Tradition mourned his passing on the RCA Facebook page as “a man of wisdom, scholarship, and leadership.”

It was also in Springfield that Lamm honed his talents as a master orator, following in the tradition of Rabbi Joseph Lookstein of Manhattan’s Kehilath Jeshurun, where Lamm had been an assistant rabbi.

By the time Lamm landed a rabbinic position at The Jewish Center, a high-profile Orthodox synagogue on the Upper West Side, his sermonizing had begun earning him wide acclaim.

“If Rabbi Lookstein was the master teacher, then Rabbi Lamm was the master student; he set the standard for his generation of Orthodox preachers,” Touro College history professor Zev Eleff wrote in a 2013 essay in Jewish Action magazine.

“The purpose of Torah is neither some kind of arbitrary spiritual exercise, nor the beating of man into submission in order to aggrandize the divine ego. Rather, Torah is the divine instrument for man’s spiritual welfare and fulfillment,” Lamm said in a 1971 sermon. “The Torah is God’s formula for man’s moral development. The prescriptions may be difficult, they may entail discipline and renunciation, but the purpose of Torah and commandments is the good of mankind.”

A history of The Jewish Center credits Lamm with showing that “traditional Judaism had something relevant, thoughtful and inspiring to say about the issues of the day.”

In 1959, Lamm became the senior rabbi at The Jewish Center and a professor in Jewish philosophy at Yeshiva University, where he helped make the case for Modern Orthodoxy at a time when it wasn’t at all clear that the embrace of both Orthodox observance and the modern world was possible. Lamm was the rare Orthodox rabbi who was well-versed in both secular and Jewish scholarship — and inordinately articulate when it came to both.

“He was a real model of a sophisticated Orthodoxy at a time when Orthodoxy was sorely lacking sophistication,” Schachter said. “He set the bar for what an elegant sermon should be. He was a master darshan [preacher], and of course he carried that over as president of Y.U. in all the speeches he gave.”

Lamm became Y.U.’s third president – and its first American-born one — in 1976, succeeding Samuel Belkin, who had led the institution for 33 years. At the time, Yeshiva was teetering financially, and Lamm proved adept at appealing to donors and bolstering the school’s academics. Y.U. gradually rose to become a top 100 school in university rankings.

After Lamm stepped down from Yeshiva’s presidency in 2003, he proved irreplaceable. Y.U. had always been led by someone who held both the post of university president and head of its rabbinical program – an arrangement that embodied the university’s dual mission of Torah U’madda, or Torah and secular learning. But the university could not find such a candidate to succeed Lamm.

In the end, the presidency went to Richard Joel, formerly Hillel’s international director and the first non-rabbi to occupy Y.U.’s top job, while Lamm stayed on as head of the rabbinical school, known by its acronym RIETS. Lamm remained head of RIETS and Y.U. chancellor for another decade.

When he finally announced his retirement in 2013, at age 85, Lamm surprised many by penning a resignation letter that included an apology for mishandling allegations of sexual abuse against faculty members at Y.U.’s affiliated high school for boys in the 1970s and ’80s, which had been detailed in the Forward the previous year. But Lamm handled them the way many such incidents were treated at the time: quietly and internally.

“At the time that inappropriate actions by individuals at Yeshiva were brought to my attention, I acted in a way that I thought was correct, but which now seems ill conceived. I understand better today than I did then that sometimes, when you think you are doing good, your actions do not measure up,” Lamm wrote in his letter. “True character requires of me the courage to admit that, despite my best intentions then, I now recognize that I was wrong.”

At the time, a $680 million lawsuit against Y.U. by 34 former students of the boys high school was in the works. The lawsuit was dismissed ultimately due to the expiration of the statute of limitations.

Though Lamm was open and honest with his failings to protect the Yeshiva students who reported the abuses, Yeshiva’s administration initially declined to independently investigate the abuses. It eventually hired a law firm to commission such a report but its board of trustees only allowed the release of a three-paragraph summary of the report’s specific findings, which only mentioned two alleged abusers employed by Yeshiva, and did not address the administration’s role in covering up the abuses.

Dratch said his father-in-law was plagued by guilt over his role in failing to halt the abuse.

“That people suffered was tremendously bothersome to him, and he regretted that,” Dratch said.

In his later years, Lamm faded from public life as he suffered from an illness that affected memory, a family member said.

Lamm was hardly the only famous member of his family. His brother Rabbi Maurice Lamm, who died in June 2016, was the author of the how-to shiva book “The Jewish Way in Death and Mourning,” among other works. His sister’s son, Shalom Auslander, wrote a popular 2007 memoir, “Foreskin’s Lament,” about rejecting Orthodoxy (and his father’s abuses), and also wrote and created Showtime’s “Happyish.”

Lamm is survived by two sons, Shalom, a real estate developer involved in a controversial Hasidic development in the upstate New York village of Bloomingburg, and Joshua Lamm, a psychiatrist; and a daughter, Chaye Warburg, an occupational therapist in Teaneck, New Jersey. His daughter Sara Lamm Dratch died in 2013.