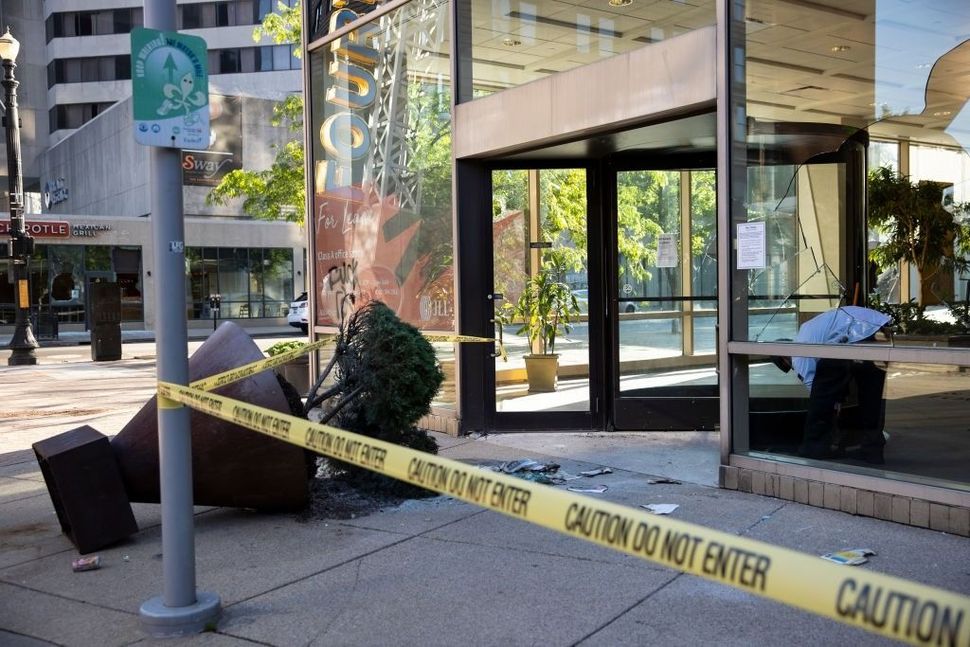 Workers clean up protestor damaged businesses following a night of protests on May 30, 2020 in Louisville, Kentucky. Protests have erupted after recent police-related incidents resulting in the deaths of African-Americans Breonna Taylor in Louisville and George Floyd in Minneapolis, Minnesota. Image by Brett Carlsen/Getty Images

A Washington, D.C. kosher restaurant that was damaged in riots on Sunday night published a message of support for those protesting systemic racism.

“Last night windows were broken and a fire was set at our K Street location,” the restaurant Shouk, which serves Israeli cuisine, posted on its website. “While we are sad that this has happened, we continue to stand in solidarity with those marching to make their voices heard. Rebuilding our restaurant is easy compared with the hard work we all must do to address the structural injustice that plagues our communities. Black Lives Matter.”

Commenters responded positively to the message on its Facebook page. “I’ll happily support your business at my first opportunity,” one person wrote. “Glad to see business standing with the cause and acknowledging the importance of the movement.”

Jewish-owned small businesses across the country have been damaged during the unrest of the past week, in which rallies against police brutality have devolved into violence after confrontations with public safety officers. For example, damaged buildings in Los Angeles included a pharmacy, clothing store, kosher bakery and two synagogues, including one that was graffitied with “Free Palestine” and “Fuck Israel.”

The protests began in Minneapolis last week after an African-American man named George Floyd suffocated to death while under a police chokehold. Since then, Jewish-owned area stores like Ax-Man Surplus and Uptown Pawn have been damaged by looters.

Ax-Man owner Jim Segal told USA Today that he hid behind a steel door while rioters ransacked his wares. He said the Minneapolis police officers’ actions were “horrific” but was disappointed by the local government’s response to the broader violence.

“This is just stuff, no comparison [to a person dying],” he said, adding, “Indefensible what happened to Mr. Floyd, but this doesn’t make it better. And I don’t know what does.”