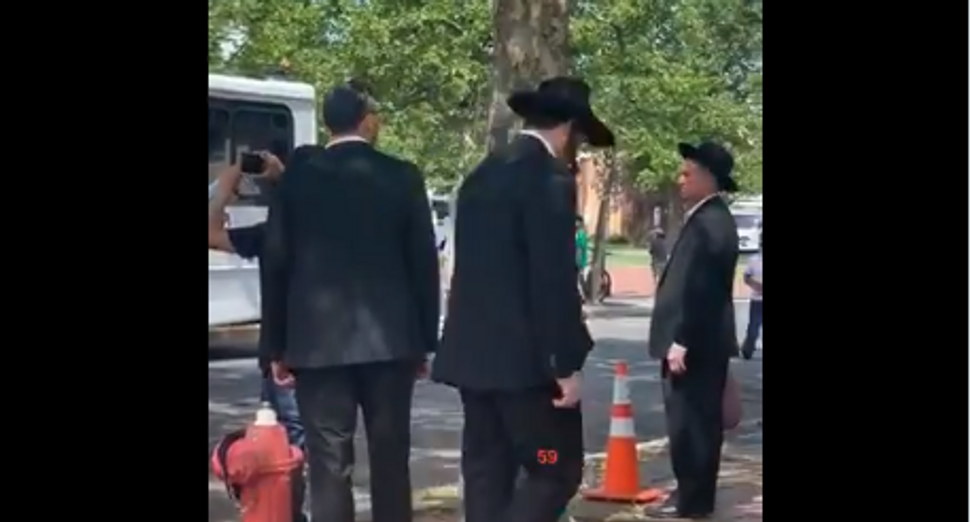 The rally in Lakewood, N.J. on Saturday was one of hundreds around the country over the weekend protesting the killing of an African-American man, George Floyd, while being forcibly detained by police. A video captured by Mishpacha showed at least three men in Lakewood dressed in the black outfits typical of Orthodox men. Two of the men were wearing hats and one was wearing a kippah; one of the apparent officers had peyot, long sidelocks.

Unfortunately for the officers, one of them appeared to be holding a cell phone – which would be forbidden to Orthodox Jews on Shabbat.

Undercover law enforcement dressed as frum Jews as yesterday’s protest in Lakewood. Not clear where they buy these disguises ?‍♂️ ?? pic.twitter.com/qczhIXtkJz

That vid of undercover cops dressed as hassidic Jews at a Lakewood protest being torn up in the comments by Jewish ppl is my favorite thing ever pic.twitter.com/tOheDe01Vv

When I was growing in Lakewood, my elementary school was across the street from a motel that was infamous for drug deals and prostitution. I have seen this type of undercover play with my own eyes. It does not, typically, fool anyone. https://t.co/avERHWJoBQ

If you want to blend in with the frum community, its best not to wear a yarlmulka that you grabbed from the communal bin at the front door of the reform shul.