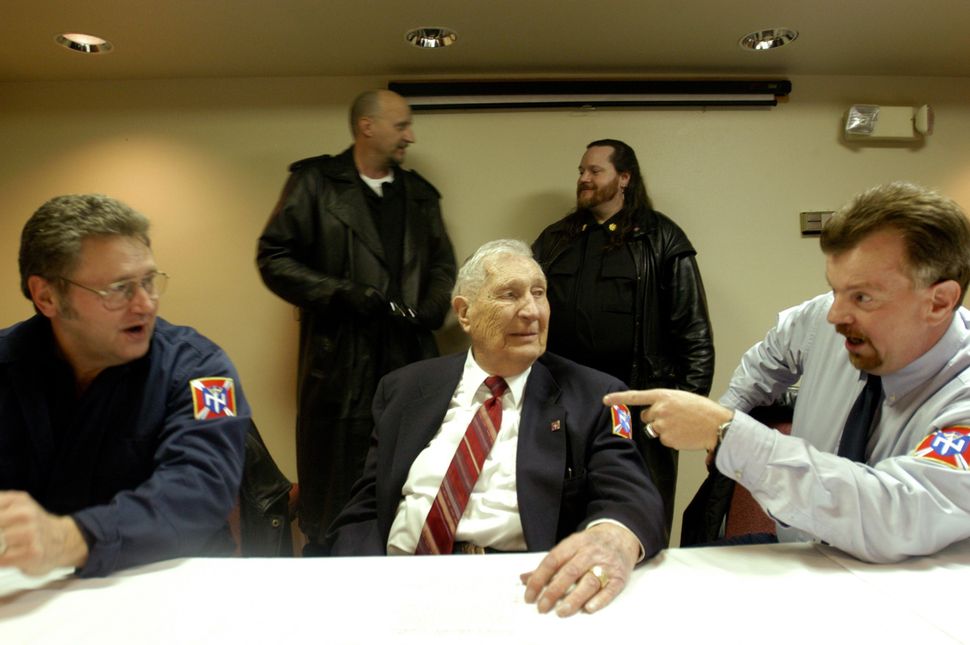 Morris Gulett, right, current leader of a Louisiana chapter of the Aryan Nations, speaking to the organization’s founder, Richard Butler, center, and Ray Redfeairn, Butler’s successor, left, at a meeting after a protest in front of the Southern Poverty Law Center in Montgomery, Alabama January 25, 2003. Image by Getty

Morris Gulett, leader of a Louisiana chapter of the neo-Nazi group the Aryan Nations, has donated at least $2,000 to Donald Trump’s 2020 campaign — and the campaign has not returned any of the money.

Gulett made 29 separate donations from 2017 through May 2020, according to recent election filings reviewed by Popular Information.

He and his organization are white supremacists; he calls for genocide of all Black people, and ends his sermons with Nazi salutes.

In October 2018, the Forward reported further donations to Trump from Gulett.

“No political party should accept political donations from extremists, hate groups, and those who advocate anti-democratic principles, period,” ADL spokesman Todd Gutnick said in a statement at the time.

1. The Trump campaign has accepted thousands of dollars from neo-Nazi leader Morris Gulett.

Gulett set up an outpost of the Aryan Nations in Louisiana and touted it as the “most-feared and revered white supremacist organization the world has ever known.”https://t.co/2g8aFhoD6s

In addition to donations to the Trump campaign, Gulett, has also donated at least $626 to the Republican National Committee since 2018, Popular Information reported.