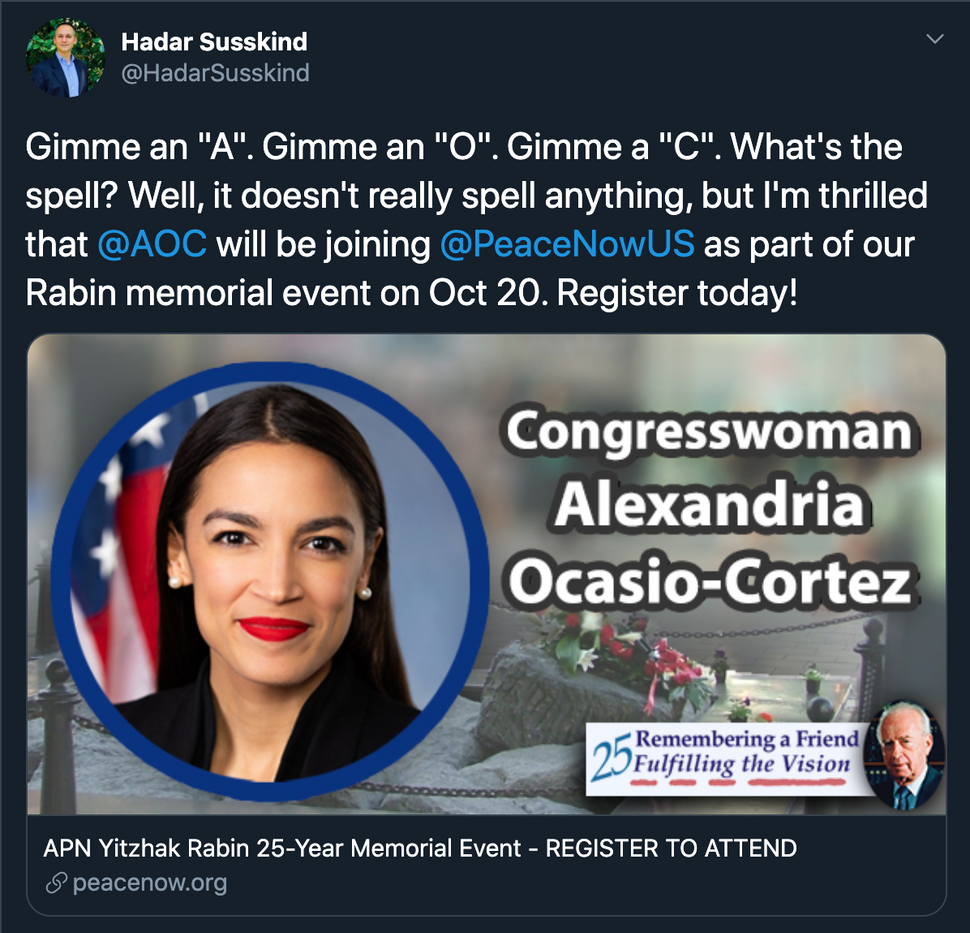 Congresswoman Alexandria Ocasio-Cortez announced she will take part in an Americans for Peace Now event honoring Yitzhak Rabin.The virtual event is scheduled to take place Oct. 20, and will celebrate the life and legacy of the former Prime Minister of Israel on the 25th anniversary of his death.

The announcement comes as a surprise to some— and has sparked anger on Twitter from anti-Israel advocates— considering APN’s pro-Israel stance, and Ocasio-Cortez’s outspokenness on issues related to the Israeli government’s annexation of West Bank territory and U.S. relations with Israel.

Americans for Peace Now is the American fundraising arm of the Israeli NGO, Peace Now, Shalom Achshav, founded in 1978 by former IDF officers to promote a two-state solution to the Israeli-Palestinian conflict.

In June, Ocasio-Cortez was among four House Democrats to author a letter to Secretary of State Mike Pompeo that proposed cutting assistance to Israel should annexation proceed. The letter, which was also signed by fellow congresswoman Rashida Tlaib, was opposed by AIPAC.

Ocasio-Cortez has criticized Prime Minister Benjamin Netanyahu and has been strongly opposed to Israeli annexation. She has also been adamant that there is a difference between criticism of Israeli government policies and antisemitism:

“The Right wants to advance this notion that if you engage and critique an Israeli policy you are anti-Semitic… But it’s the furthest thing from the truth,” she said in a 2019 radio interview with Ibrahim “Ebro” Darden.

The memorial event will be hosted over Zoom by actor Mandy Patinkin, and include special guests and performances from the U.S. and Israel. Ocasio-Cortez is expected to be joined by other political leaders and social justice and peace advocates, according to APN’s website.