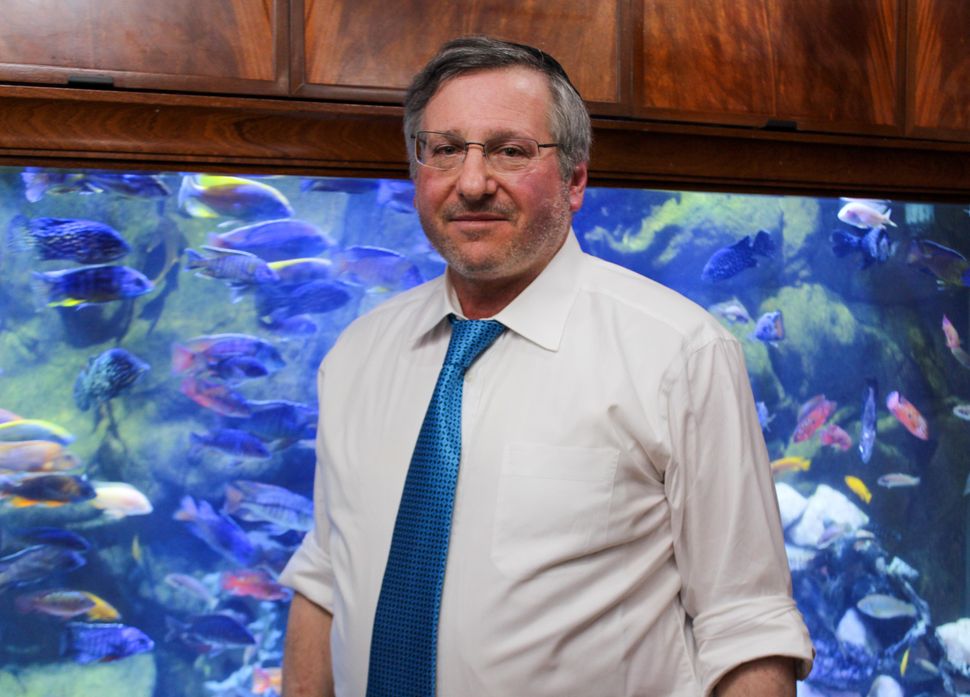 Richard Roberts at home, in front of the aquarium that serves as the backdrop for his sporadic addresses to the Orthodox world. Image by Ari Feldman

Donald Trump went maskless at a fundraiser at his New Jersey golf club in Bedminster Wednesday evening, a day before he tested positive for coronavirus, according to a Jewish Republican donor who attended the event.

Dr. Richard Roberts, a retired pharmaceutical executive, told the Asbury Park Press that Trump was separated from the attendees of a $35,000-a-head “roundtable” discussion with the president, at one end of a long rectangular table.

“He had 10 feet to the left and right of him before any guests were seated, and only one or two guests on his end of the table,” Roberts said.

Roberts is a prominent figure in the Orthodox hub of Lakewood, N.J., one of the fasted growing Orthodox communities in the country. He is best-known for a twice-annual free carnival that attracts thousands of local children, and for using his authority as a physician to push back against anti-vaxxers in the Hasidic community.

Trump was “energetic” and sharp during the discussion, Roberts said. The rest of the guests were not socially distanced, but Roberts said he was not concerned going into the event, since the Secret Service tested every attendee. Roberts said it was the first campaign event he has attended in person since the beginning of the pandemic lockdown.

“I figured, if the Secret Service is willing to step in the line of fire and take a bullet for the president, then that level of security for COVID-19 certainly works for me,” he said.

On Friday morning, New Jersey Gov. Phil Murphy urged attendees of the event to quarantine and get tested for coronavirus.

We urge everyone who attended yesterday’s event in Bedminster to take full precautions, including self-quarantining and getting tested for #COVID19.

Roberts, however, said he was not going to get tested, and would instead resume his strict quarantine.

He told the Forward he is not experiencing any symptoms.

He said he has given the Trump campaign just under $900,000 this year, and praised the president’s support for Israel and religious minorities. He went to the fundraiser, he said, to thank the president for the Department of Justice opening an investigation into antisemitism within the Republican party of Jackson, N.J., a town next to Lakewood where Orthodox Jews newly moved to the area have confronted an anti-Orthodox backlash.

“He’s very concerned about the safety of American citizens, not just Jewish per se, and he’s gonna do everything he can to keep people safe from these riots,” Roberts said.