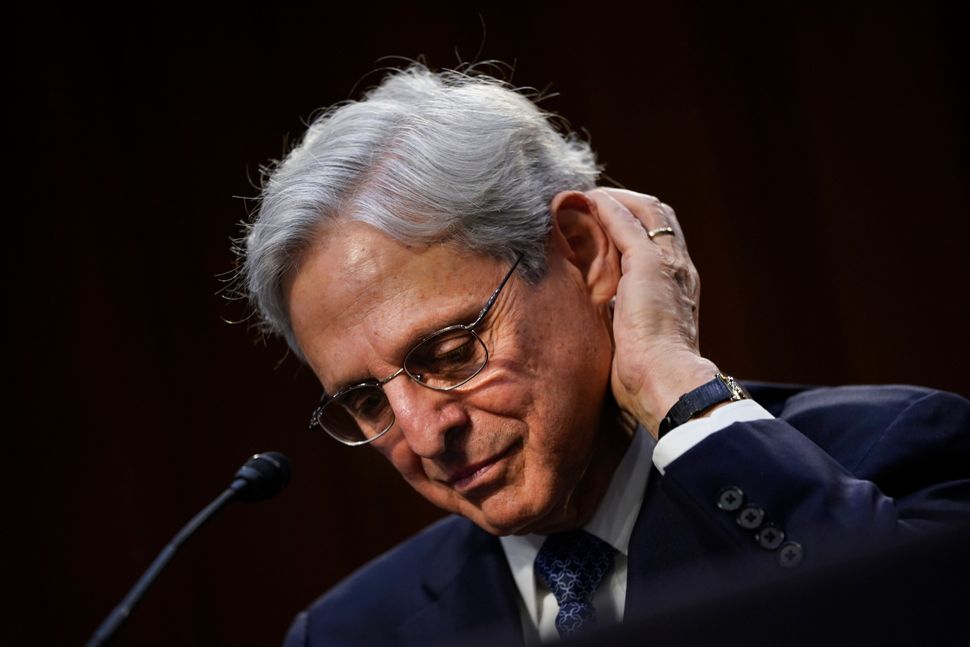 Attorney General nominee Merrick Garland testifies during his confirmation hearing before the Senate Judiciary Committee in the Hart Senate Office Building on February 22, 2021 in Washington, DC. Garland previously served at the Chief Judge for the U.S. Court of Appeals for the District of Columbia Circuit. Photo by Getty Images

Merrick Garland, President Joe Biden’s nominee to be attorney general, became emotional during his confirmation hearing Monday while discussing how his grandparents fled European antisemitism. Garland, a federal judge who has previously spoken about his Jewish identity, delivered the brief but moving remarks in response to a question from Sen. Cory Booker, D-NJ, about how his family history had informed his interest in the attorney general position.

AG nominee Merrick Garland chokes up talking about his grandparents fleeing anti-Semitism and how this motivates him: “The country took us in and protected us. And I feel an obligation to the country pay back. This is the highest, best use of my own set of skills to pay back.” pic.twitter.com/tXXTNkiARs

“I come from a family — where my grandparents fled antisemitism and persecution,” Garland said. “The country took us in and — protected us — and I feel an obligation to pay back — and this is the highest, best use of my own skills to pay back.”

Booker said that Garland had previously recounted his family history in a private conversation. Garland, who serves on the D.C. Circuit Court of Appeals, was nominated to the U.S. Supreme Court by President Barack Obama in 2016 but the Republican-controlled Senate refused to consider his nomination.

During a Rose Garden speech following his nomination, Garland recounted his grandparents’ immigration to the United Sates as he stood alongside Obama and then-Vice President Joe Biden.

“My grandparents left the Pale of Settlement…in the early 1900’s, fleeing antisemitism and hoping to make a better life for their children in America,” Garland told reporters in the Rose Garden, flanked by President Obama and Vice President Joe Biden.

Jay Michaelson, a former Forward columnist who once clerked for Garland, said in a 2019 interview that Garland was “a total mensch” and that he was he was “culturally, though not religiously Jewish, but inspired by the highest values of our ethical and social justice traditions.”

Garland, who prosecuted the 1995 Oklahoma City bombing as a federal prosecutor, told senators during the hearing Monday that the nation faced a more serious danger from domestic extremists than it did during the 1990s. He also pledged to conduct his work free from political interference, to strengthen the Department of Justice’s civil rights division and said that investigating the Jan. 6 Capitol riot would be his top priority if confirmed.