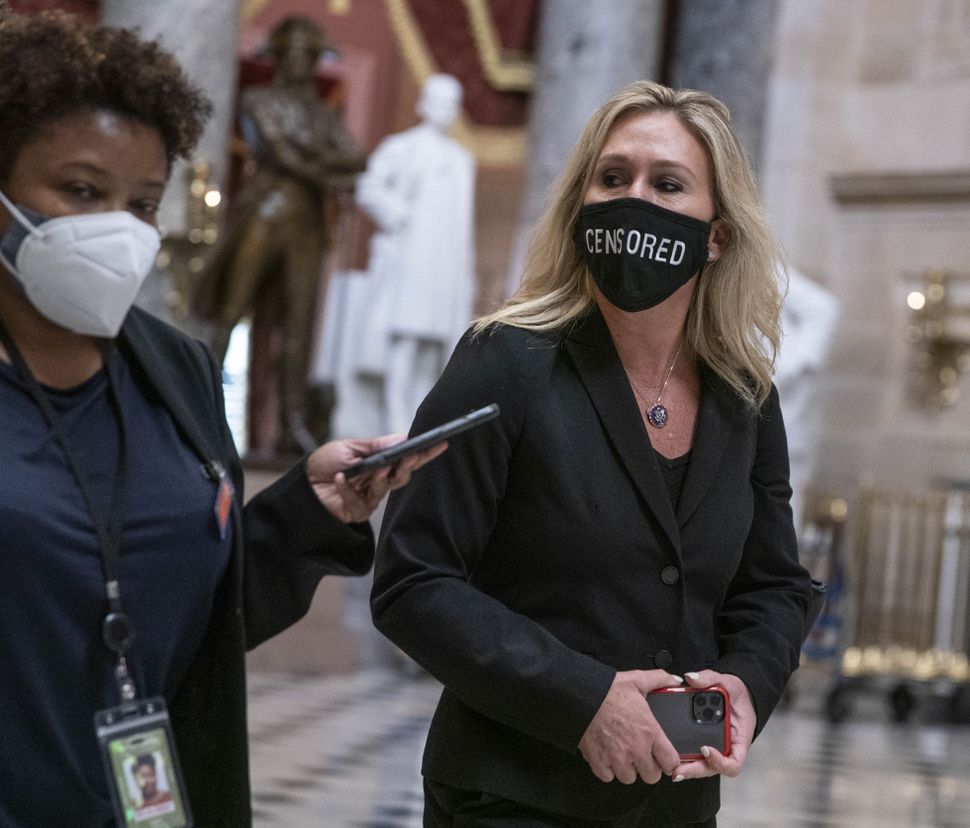 Congresswoman Marjorie Taylor Greene claimed in a TV interview on Tuesday that she didn’t come up with the term “Jewish space lasers” that triggered backlash from the Jewish community. She blamed the whole hoopla on an activist, leftist journalist.

In a recently uncovered Facebook post published by Media Matters, Greene alleged that space lasers were responsible for the 2018 Camp Fire, which burned more than 150,000 acres and killed 85 people in California. She suggested the “lasers of blue beams of light” were funded by the Rothschilds.

“This is a story that some leftist ‘journalist’ — really he’s an activist — wrote a hit piece on me and titled it ‘Jewish Space Lasers,’” Taylor Greene told Newsmax TV host Greg Kelly. “You know, the left-wing media, they just run the same lies over and over again and they call me an anti-Semite and say that I said something like Jewish space lasers and I never did.”

Taylor Greene did not name the journalist to whom she was referring.

The Georgia Republican congresswoman was removed from her House committee assignments last month because of her embrace of the QAnon conspiracy theories and incendiary comments – including some that were antisemitic.

Greene has attacked reporters, sometimes claiming that they are the ones being antisemitic when they press her about controversial statements she’s made.

On Monday, she called a reporter’s question about comments made by former congressional candidate Laura Loomer in favor of white nationalism “anti-Semitic attacks” because Loomer is Jewish.

“Stop your anti-Semitic attacks on Laura Loomer,” Taylor-Greene said in a statement to Matt Shuham, a reporter at Talking Points Memo, when he asked her what she thought about Loomer’s self-professed support for white nationalism in a December 2017 interview unearthed on Sunday by the blog Angry White Men.

Nick Dyer, a spokesperson for Taylor Greene, did not return a request for comment.