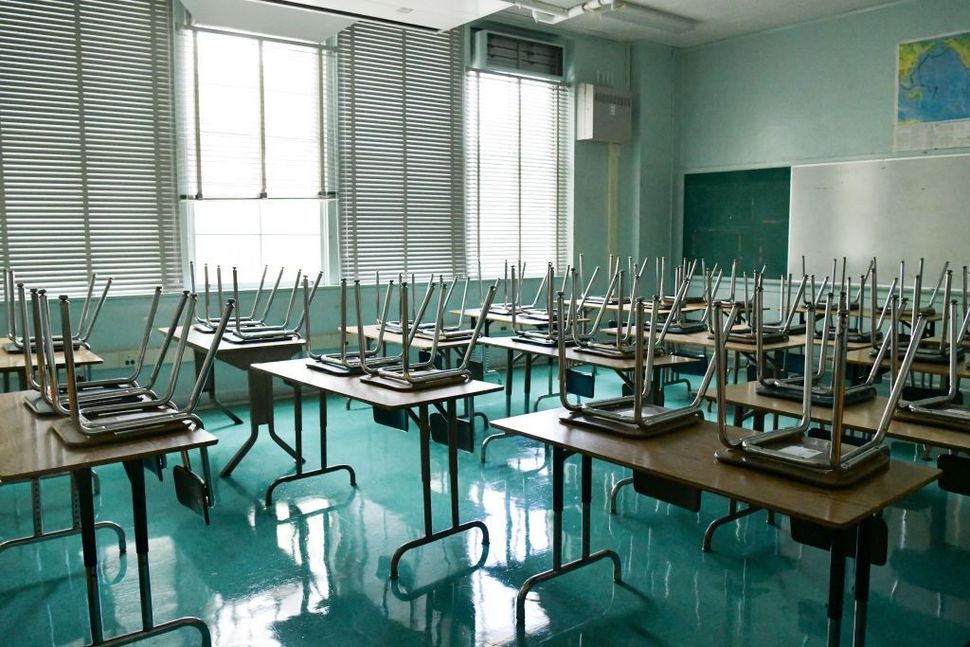 An empty classroom is seen at Hollywood High School on August 13, 2020 in Hollywood, California. Photo by Rodin Eckenroth/Getty Images

The California State Board of Education voted on Thursday to approve the most recent draft of the Ethnic Studies Model Curriculum. The vote follows four years of contentious debate and objections leveled against the curriculum by Jewish organizations across the political spectrum.

Nearly five years ago, California passed a bill, AB 2016, mandating a commission to create and the state board to adopt a “model curriculum in ethnic studies.” While that statute only “encourages” local school districts to adopt the curriculum, a new bill currently being considered by the state legislature would make ethnic studies a high school graduation requirement.

Mainstream Jewish groups such as the San Francisco Bay Area Jewish Community Relations Council, the Anti-Defamation League (ADL), and the American Jewish Committee (AJC) have come out in support of the most recent draft. Tyler Gregory, the executive director of the Bay Area JCRC, spoke at the state board of education’s meeting on March 18 in favor of adopting the curriculum and invoked his own background as a descendent of Holocaust survivors.

“We urgently need ethnic studies, which gives marginalized communities the agency to define and share their own stories, cultures and histories,” Gregory said in a statement following the approval vote. “As Jewish Americans, we can relate. For too long in our classrooms, Jewish identity has been flattened and distorted to that of a white religious minority, taking little note of our global peoplehood, history, diversity and oppression.”

The current version of the ESMC includes two lesson plans on Jewish Americans, while an initial draft, which was widely criticized by organizations like the ADL and AJC, included none. The lessons, like all the others in the document, are described as “samples,” and individual schools that adopt the curriculum are free to disregard or amend them, according to the leader of the state assembly’s Jewish caucus, Assemblymember Jesse Gabriel.

In 2019, the ADL accused a previous version of the draft of incorporating “harmful anti-Jewish stereotypes in its completely inappropriate and biased criticism of Israel in a curriculum intended to focus on American ethnic groups.” Groups like JIMENA, a nonprofit dedicated to elevating the history of Jews indigenous to the Middle East and North Africa, advocated since then for reforms to the curriculums — advocacy they see as having succeeded.

“Since 2019, Jewish and interfaith groups throughout California successfully united to remove anti-Semitism and the erasure of Middle Eastern minorities from the proposed curriculum,” Sarah Levin, the executive director of JIMENA, wrote last month, “turning what had been a hurtful document into a model for how to include content about Jews in the contemporary classroom.”

Still, some Jewish Californians take issue with the way the curriculum incorporates the narratives of Middle Eastern Jews.

Three professors of Jewish Studies argued in an open letter on Tuesday that the model lesson on “Antisemitism and Jewish Middle Eastern-Americans” deployed a “homogenizing” framework that “misuses the figure of the Middle Eastern Jew to try to argue that all Jews, including European Jews, are ‘indigenous’ to the Middle East.”

“This framing seeks to bolster the centrality of the State of Israel in Jewish life and draw equivalences between criticism of Israel and antisemitism more generally,” the professors, including Stanford’s Ari Kelman, wrote.

Other activists, on both the left and right, continue to take issue with the curriculum as a whole. The authors of its first iteration — all scholars of ethnic studies and people of color — have asked for their names to be removed from the document and condemned it as “compromised due to political and media pressure” from “rightwing interest groups.”

“As is often the case when Black, Indigenous, and people of color gain power, attacks on Ethnic Studies have plagued the discipline since its earliest days,” Davis said. “Today’s fight to maintain the integrity of the ESMC is the next phase of the fight to defend Ethnic Studies.”

For some Jewish activists, however, the fight is not about amending details in the curriculum but about keeping ethnic studies classes out of high school entirely. Tammi Rossman-Benjamin, the head of the AMCHA Initiative, a group fighting antisemitism in institutions of higher education, said in a statement on Thursday that “it is reckless of the state to pour millions of taxpayer dollars into a curriculum” that, according to her, “is steeped in Critical Ethnic Studies.”

“Most profoundly concerning for the Jewish community is the portrayal of Jews, filtered through the lens of Critical Ethnic Studies, as ‘white’ and ‘privileged,’” she wrote. “At a time when anti-Jewish sentiment, hostility and violence has reached truly alarming levels, indoctrinating students to view Jews as ‘white’ and ‘racially privileged’ is tantamount to putting an even larger target on the back of every Jewish student.”

Gregory, the head of the region’s JCRC, sees the situation differently: To him, the model curriculum creates an opportunity to prevent antisemitism in future generations.

“Our crucial inclusion presents our own chance to impart the richness of our people,” he said at the meeting, “so that future generations hear the dog whistles of antisemitism that too often fall on deaf ears.”