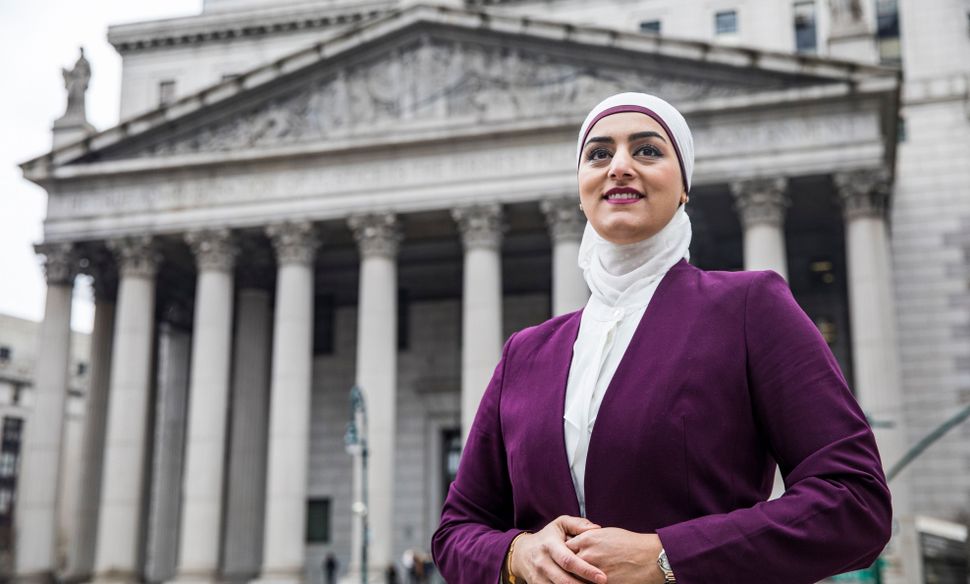 Tahanie Aboushi, a candidate for Manhattan district attorney, has been endorsed by The Jewish Vote, a leading Jewish progressive group.

Aboushi, a Palestinian-American civil rights attorney, is one of eight candidates running in the June 22 Democratic primary to succeed Cyrus Vance, Jr., who is retiring at the end of year. She also has the backing of Democrats Jamaal Bowman, a first-term congressman from New York; Rashida Tlaib of Michigan, the first Palestinian-American woman in Congress; and the Working Families Party, among other local politicians and progressive groups.

Rachel McCullough, The Jewish Vote’s political director, said that Aboushi “stood out” among the candidates – most of whom tout progressive platforms – as a leader who is “the most committed to reducing the department’s footprint” and most likely to “fundamentally transform” the criminal legal system on such matters as cash bail, police accountability and decriminalizing sex work.

Aboushi, 35, has modeled her campaign on her own experience with the criminal justice system. Her parents, who immigrated from the Beit Hanina neighborhood in East Jerusalem, owned a grocery store in Sunset Park, Brooklyn. In 1999, her father, Ahmad, was sentenced to 22 years in federal prison for his part in a conspiracy to steal from truck drivers and sell stolen goods across state lines. He was released from federal prison in 2018 after serving most of his sentence.

In an interview with the Forward, Aboushi said that her father’s incarceration led her to become an attorney and fight for thousands of families who share her story but “haven’t been able to tell it and haven’t been considered part of the constituents for offices like the Manhattan district attorney.” Aboushi said it is “an incredible honor” for her to earn the support of a group of Jewish community activists who have stood together with the Muslim community against hate crimes, discriminatory rhetoric and on housing issues. She called it “a testament to the broad coalition that we’re building of people from all walks of life who want to see real justice and transformational change in Manhattan and our city as a whole.”

The Jewish Vote, a 501(c)(4) organization that was formed in 2018 by leaders of Jews For Racial & Economic Justice, is making its foray into New York City politics. The group recently announced their backing of Dianne Morales as its first choice for mayor and Brad Lander for city comptroller. It endorsed Tiffany Cabán, a progressive former public defender, in the close race for Queens district attorney in 2019. Cabán lost that race to Melinda Katz, a longtime Democratic politician, by 55 votes and is now running for the City Council.

McCullough said that in addition to Aboushi’s personal story and civil rights background, members of the group were especially inspired — during the candidate screening process — by her approach to violence inspired by hate “and her recognition that an agenda that relies on increased policing and escalating hate crimes prosecutions will not heal our communities and will not stop hate violence in New York City.” Sophie Ellman-Golan, JFREJ’s director of strategic communications, added that members were also moved by “the amount of empathy that Aboushi brings to her work.”

There’s been no public polling on the race, so no clear frontrunner has emerged. Other candidates include Tali Farhadian Weinstein, a former federal prosecutor; Alvin Bragg, who most recently served as chief deputy attorney general of New York; State Assemblyman Dan Quart; Diana Florence, a longtime prosecutor in the Manhattan DA’s office; Lucy Lang and Liz Crotty, who both served as assistant district attorneys; and Eliza Orlins, a former public defender and television personality. An internal poll released by the Aboushi campaign showed her tied for first place with Farhadian Weinstein, with 57% of voters undecided.

Aboushi’s youngest brother, Odeh, was one of the first Arab-Americans to be drafted by an NFL team – the New York Jets in 2013.

CORRECTION: An earlier version of this story incorrectly stated that Aboushi’s father was arrested for selling untaxed cigarettes. He was actually convicted for his part in a conspiracy to steal from truck drivers and sell stolen goods across state lines.