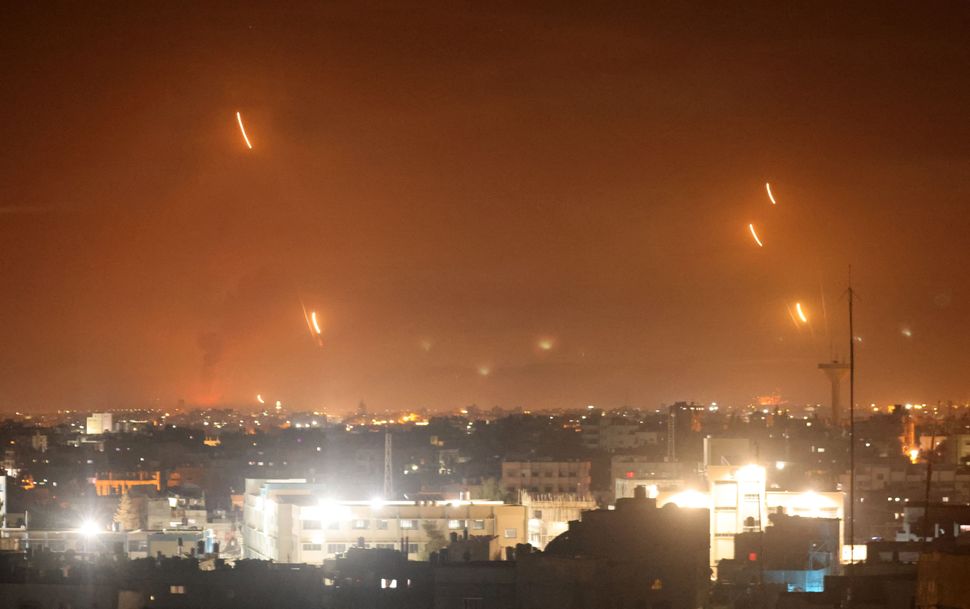 Rockets are launched towards Israel from Rafah, in the southern Gaza Strip, early on May 12, 2021. By SAID KHATIB/Getty Images

Click here for live updates on the situation from Haaretz.

Fighting between Israel and Hamas escalated Wednesday in the most intensive aerial exchanges since the deadly summer-long 2014 war in Gaza.

Six Israelis were killed and dozens injured in the intensifying conflict, which included a barrage of some 130 rockets on the Tel Aviv area, and many more across Israel’s south. This followed an Israeli airstrike that collapsed a 13-story residential tower in Gaza City that the Israeli military said was used by Hamas’ political leadership. By Wednesday morning, the Gaza health ministry reported, 43 people had been killed.

Residents of the tower and people living nearby had been warned to evacuate the area around an hour before the air strike, witnesses said.

The fighting prompted international concern that the situation could spiral out of control. The White House on Tuesday condemned ongoing rocket attacks by Hamas and other groups against targets in Israel and said Israel has a legitimate right to defend itself.

The Israeli military boosted its presence along the border. Authorities called on local residents to remain at home and near bomb shelters until further notice. Violent clashes between police and protesters spread through Arab cities inside Israel, with one man shot dead.

“Hamas and Islamic Jihad have paid – and will pay – a heavy price for their aggression,” Prime Minister Benjamin Netayahu said in a statement Tuesday. “It will take time. We’ll restore security for the citizens of Israel,” he added.

The defense minister, Benny Gantz, said: “We have the right and the duty to act” against violations of our sovereignty.”

READ MORE from Haaretz: Military analyst Amos Harel says we are ‘on the brink of war;’ how this escalation compares with others since 2014.

At Tuesday’s situation assessment, the IDF chief of staff, Lt. Gen. Aviv Kochavi, said all units of the Israel Defense Forces must prepare for a wider campaign of indefinite duration. He ordered that attacks continue on Hamas and Islamic Jihad facilities for weapons manufacturing and storage – and for the onslaught to be expanded to additional targets.

“We are ready to expand the fight as much as needed,” Kochavi said. “We are determined to hurt the terror groups in a very serious way.”

He said attacks must also continue on “every Hamas or Islamic Jihad terrorist” wherever they are. He ordered the Gaza Division to be reinforced, including infantry and armored brigades, alongside higher preparedness for air defense, intelligence and air force units.

The effort would continue so that residents of the south can live in safety, Kochavi said, adding that after the one-day Shavuot holiday that ends Monday evening, the IDF will consider whether to resume the Chariots of Fire training exercise that was suspended.

Hamas said Tuesday that “resistance to the occupation will continue regardless of the extent of the sacrifice, and until Israel changes its policies.”

Hamas said it would respond with force to every attack. “Israel planned to attack the homes of innocent civilians, and the number of casualties attests to the scope of their crimes,” it said.

Diplomats said that the United States was delaying United Nations Security Council efforts to issue a public statement on escalating tensions between Israel and the Palestinians because it could be harmful to behind-the-scenes efforts to end the violence.

Speaking on condition of anonymity, one source said that Washington is “actively engaged in diplomacy behind the scenes with all parties to achieve a ceasefire” and was concerned that a council statement might be counterproductive at the moment.