Jewish and Arab mayors and heads of municipalities join together to promote coexistence. Courtesy of Shir Nosatzki

Barely a year ago, Shir Nosatzki, gushed with pride over the popularity of a video she had helped produce as co-founder of “Have You Seen the Horizon Lately?” — an NGO devoted to promoting Jewish-Arab coexistence in Israel.

The video, which went viral and garnered over 2 million views, highlighted the heroic efforts of Arab Israeli doctors and medical professionals to quell the coronavirus pandemic.

In this second week of the conflict between Israel and Hamas, such expressions of Arab-Jewish cooperation and friendship seem to some like wishful thinking.

It’s not just the exchange of thousands of rockets that has resulted in more than two hundred deaths in Gaza, as well as a dozen in Israel. Unlike previous conflicts, this month’s has been marked by violent incidents between Jews and Arabs inside Israel, including the lynching of an Arab man by a Jewish mob in Bat Yam, and the torching of synagogues by Arab rioters in Lod.

But activists like Nosatzki won’t be shaken from their belief that Arabs and Jews can be good neighbors, and they are determined to prove it to a world saturated with images and news accounts that seem to make the case for a hate-filled future.

To that end, “Have You Seen the Horizon Lately?” mobilized more than 10,000 Jews and Arabs on social media to promote an agenda of coexistence on Facebook, WhatsApp and in other internet spaces, some of which were picked precisely because they’re popular with those who embrace hate speech and promote violence.

Nosatzki’s is not the only group trying to promote the idea of an Israel shared by Jews and Arabs.

In one viral video, Israeli Jewish, Muslim, Christian and Druze religious leaders spoke up to condemn the inter-communal violence.

In another, Jewish and Arab soccer players joined together to say that they “refuse to be enemies.”

The Israeli business community has also added its voice to the call for peace.

“We, managers and senior executives from the leading companies in the economy, who rely on the cooperation of citizens, Jews and Arabs, side by side — call for an end to violence and a way to live together,” said a statement signed by dozens of Israeli business leaders. 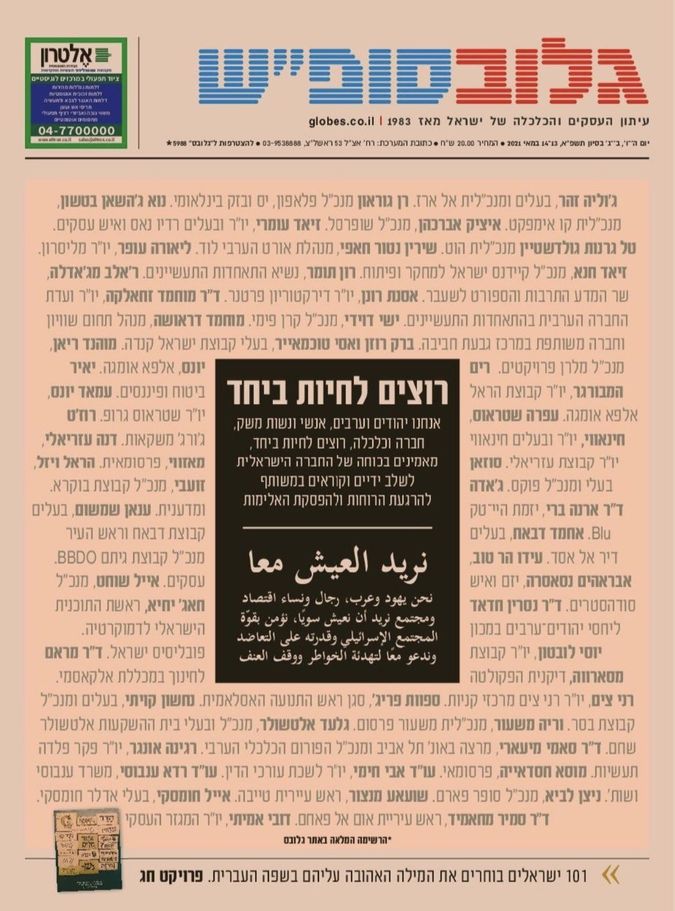 Globes front page with a message from business leaders calling for coexistence. By Screenshot of Globes

And the cover of the Israeli business daily, Globes, displayed another call for coexistence:

“We Jews and Arabs men and women of the market, of society and business, want to coexist,” it reads in Hebrew.

“The truth is at the end of the day, all the Jews and Arabs who took part in the violence are a complete minority,” Nosatzki said. “At most they are thousands, but there are millions of Jews and Arabs who for the last few days have sat at home worried and afraid.”

Just a few weeks ago, she noted, the hopeful spirit of the video she helped produce on Arab Israeli health care professionals seemed to be embodied elsewhere in Israeli society: For the first time, an Arab political party seemed poised to join together with Zionist Jewish parties in a ruling coalition that would oust the government of Prime Minister Benjamin Netanyahu.

It’s imperative for Arabs and Jews to maintain that vision for coexistence, she said.