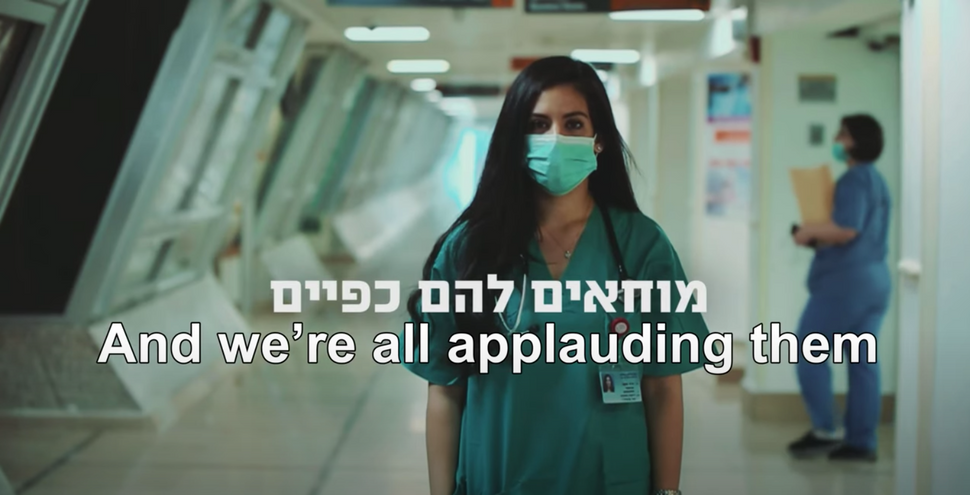 A viral video from the Israeli organization Have You Seen The Horizon Lately demonstrated support for Israeli Arabs working on the front lines against the coronavirus. Image by (YouTube)

The most viral video in Israel today is one honoring the Arab-Israeli health care workers who are on the front lines fighting the spread of COVID-19 in the country.

The video has topped 2 million views in Israel alone, meaning it has been viewed by a quarter of all Israelis, which is more than any political ad in recent years.

Produced by Have You Seen the Horizon Lately, an Israeli NGO which aims to foster co-existence between Jewish Israelis and their Arab and Palestinian neighbors, the video flashes images of health care professionals in scrubs and masks. 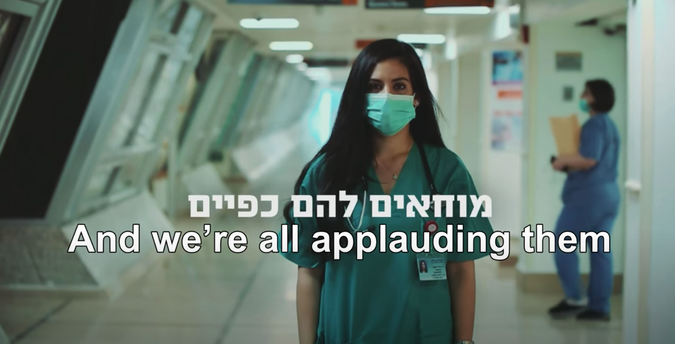 A viral video from the Israeli organization Have You Seen The Horizon Lately demonstrated support for Israeli Arabs working on the front lines against the coronavirus. Image by (YouTube)

Below them it reads in Hebrew “Now they are called heroes, and we’re all applauding them for working double shifts, never seeing their homes, risking their lives to save ours. But what about when the masks come off?”

As it reaches its crescendo the medical professionals remove their masks and show their faces as well as their names, thus revealing their Arab identity.

“Tens of thousands of Arab-Israelis are partners in fighting the war against coronavirus, they are also an inseparable part of the State of Israel,” concludes the video.

“For the first time in Israeli history, the Arab sector who are exempt from military service, are in the front line of a survival war,” explained Shir Nosatzki, founder of Have You Seen The Horizon Lately. “A big part of Israeli Arab society are true national heroes – risking their lives and protecting all Israelis.”

Nosatzki is particularly proud of the fact that the video has outpaced the viewership of any of Prime Minister Benjamin Netanyahu’s campaign ads released during the several election campaigns of the past year. Many of these were widely criticized for their racism towards Arab-Israelis.

“Two parallel things are happening these days in Israel. The first is an unbelievable hate-mongering campaign against the entire Arab political representation in the Knesset – referring to them as ‘terror supporters,’” Nosatzki said. “The second, is the general Israeli public’s support for the country’s medical teams – a huge part of which are Arabs, fighting coronavirus as the first line of defense. In fact, 21 percent of the medical workers in Israel are Arabs. So either they are saving our lives or they are terrorists, but they can’t be both.”

In response, Nosatzki and her Have You Seen the Horizon Lately Co-founder Regev Contes went to work creating a campaign which they hoped would bring to light the role of Arab-Israelis in the current crisis. “We organized this campaign ‘Partners in Faith, Partners in Government’. We did it all in one weekend with only volunteer work, and after posting it on Facebook the response has been incredible,” said Nosatzki.

The campaign comes after a year of unprecedented involvement by Arab-Israelis in the Israeli political system. Over the course of the several election cycles of the last year, the Arab Joint List, which is the main political representative of Arab-israelis, gained 15 mandates in the Knesset, and for first time in history sent an olive branch to other side, offering to sit in a government with Zionist and center-right politicians.

“It’s incredible, it shows more and more Arabs are demanding their representation and saying, ‘We want in, we want to be a part of the game, we don’t want to be forever in the opposition and politically irrelevant.’ and they became a political force to be recognized,” Nosatzki said. “And what did Gantz do? He took the arm that they offered and threw it away saying, ‘No thank you, I would rather sit in a government with a corrupt prime minister than with Arabs.’”

The Blue and White party ultimately decided there wouldn’t be public support for a government supported by the Joint List.

“That’s why I think this campaign talking about the legitimacy of Israeli Arabs to take part in the political game and in government was very urgent. Especially to the Arab public, the younger generation and the Center-left Jewish voters,” Nosatzki explained.

That younger generation, Nosatzki finds, amongst both Jews and Arabs those who are most open to the idea of peace and coexistence, but they don’t believe it is possible.

“Any poll finds that the majority of the Israeli population still supports the two-state solution, but they don’t believe it is possible,” Nosatzki said. “Among the younger generations, for their entire life they have seen only political stagnation, and when that’s all you’ve seen it’s much harder to imagine a different reality. On the contrary, if I look at my parents’ generation, they saw the Six Day War, and then saw the peace accords with Egypt. If you look at the United States, one day you have Obama and the next you can have Trump, there is something positive about that, it tells you that you have an influence, that you can change things. There is still hope.”

“So we are working on generating hope. Not in a hippy kind of way but in a very political kind of way.” Nosatzki said.