Bernie is right: Netanyahu is a racist. But he should stop saying it. 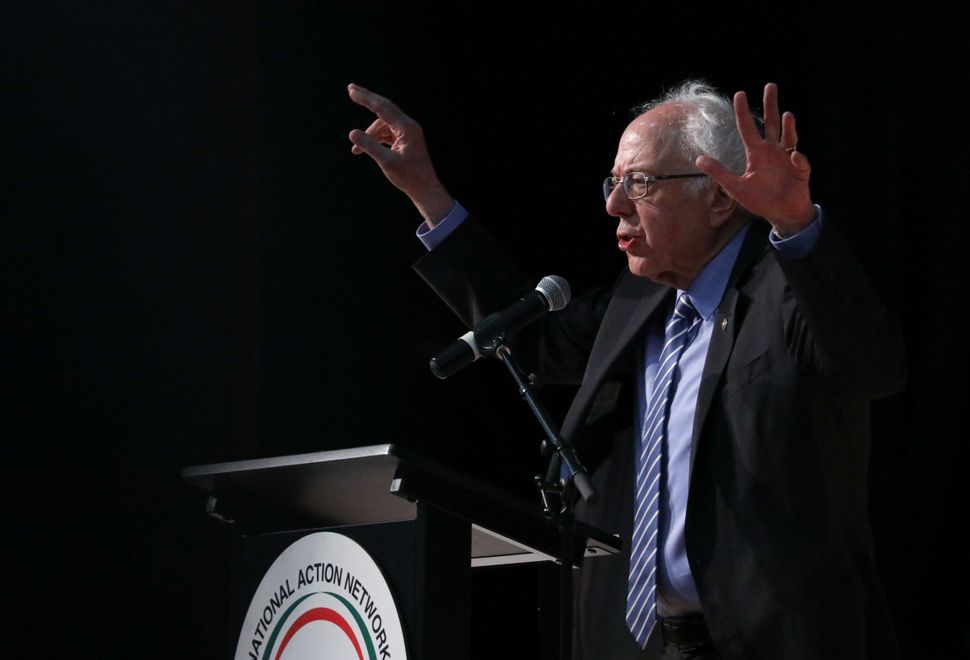 During Tuesday night’s Democratic primary debate, Senator Bernie Sanders said Israel was led by “a reactionary racist,” a clear reference to Prime Minister Benjamin Netanyahu and his long history of bigoted remarks and actions towards Arabs.

For many of us long frustrated by the favorable double standard to which Israeli leaders are often held in the American mainstream, it was a cathartic and deeply satisfying moment. “Finally,” I imagine we all said in whispered unison, “someone told the ugly truth.”

And yet, now that Sanders is the frontrunner for the Democratic nomination, it is worth asking whether he would be wise to bring this pugilistic style to the U.S.-Israel relationship if elected in November.

I think he would not be. Although the U.S. can and should apply pressure on Israel when necessary, speaking out when its leaders behave badly, a President Sanders should not look to frame his disputes with Netanyahu as a character judgment.

For starters, it’s not conducive to Sanders’s foreign policy goals. Though Sanders is often characterized as an anti-imperialist activist, lifted unaltered from an old Students for a Democratic Society group photo, the truth is, he loosely shares a common desire with his more conventional presidential hopefuls, past and present: a desire to use the bully pulpit provided by the office to promote his vision of American values to the world, implicitly backed by America’s hard military and global financial power.

Sanders understands this effort will meet resistance around the world. In a 2018 essay, he warned of the rise “of a new authoritarian axis… led by demagogues who exploit people’s fears, prejudices and grievances to achieve and hold on to power.” The rise of this anti-democratic movement was not started by Trump, Sanders says in the piece, but it was reinforced by his election: A clear signal was sent from Washington that America was now a purely transactional power, indifferent to human rights and the plight of the oppressed.

Sanders, and indeed most other competitive Democratic candidates for president, seeks to restore and improve on America’s leadership role in the world. This means confronting the human rights abuses and democratic backsliding ignored by the Trump administration.

When it comes to allies and partners, this will require an approach that leaves personal bridges and the potential for a working relationship intact. This does not mean not calling out misbehavior or reprehensible statements; however, it does mean couching such admonishments in real strategic goals with a realistic endgame.

Sanders knows how to do this. A day after the debate, he spoke out against anti-Muslim violence in India without personally characterizing Prime Minister Narendra Modi as a bigot, which he certainly is. Instead, he condemned the violence and made clear that India’s 200 million Muslims are deserving of equal citizenship rights.

Alienating leaders of allied countries is unnecessary, fruitless, and ultimately counterproductive. Sanders is a staunch anti-interventionist, repelled by the history of American-backed regime changes. Perhaps more than anyone else on the debate stage, he will have no alternative but to engage governments whose actions he seeks to influence.

Personal character judgments are an impediment to effective diplomacy, especially with populist leaders constantly looking to feed red meat to their base. It is tempting, satisfying, and even accurate to denounce someone like Netanyahu as a reactionary racist, but it will make it harder for America to effect positive change in that country.

Instead, the U.S. should leverage its existing diplomatic and economic channels without purposely sparking a nationalist backlash. This may happen anyway, but it is utterly senseless to make it the point of departure. Worse, personal judgments could backfire for those who care most about this issue and want to see the U.S. lead an effort to end the subjugation of the Palestinians.

Personal sparring, especially with allies, is just not smart foreign policy; indeed, it is a feature of the Trump presidency a future Democratic president should aspire to avoid. And in the case of Israel, it overlooks the roots of the problem and underlines the dangerous misconception that change can come from replacing one man.

Next month, Netanyahu will begin his corruption trial and polls currently show he will not have the votes after Monday’s election to pass an immunity law preventing or delaying his prosecution. It is highly likely Israel will have another leader sometime in the next four years, perhaps someone just as hawkish as Netanyahu but with less personal baggage who won’t rile up American progressives. Framing the problem around one man is a dangerous mistake.

To be fair, Sanders is only a candidate at the moment. Netanyahu is deeply unpopular with progressive voters in the Democratic primary and most of Sanders’ supporters cheered on the spectacle.

It is possible he has no intention of transferring the approach he evinced in the debate into the White House. But if he is considering it, he should weigh the potential risks for his own policy objectives. They are not small.

Bernie is right: Netanyahu is a racist. But he should stop saying it.