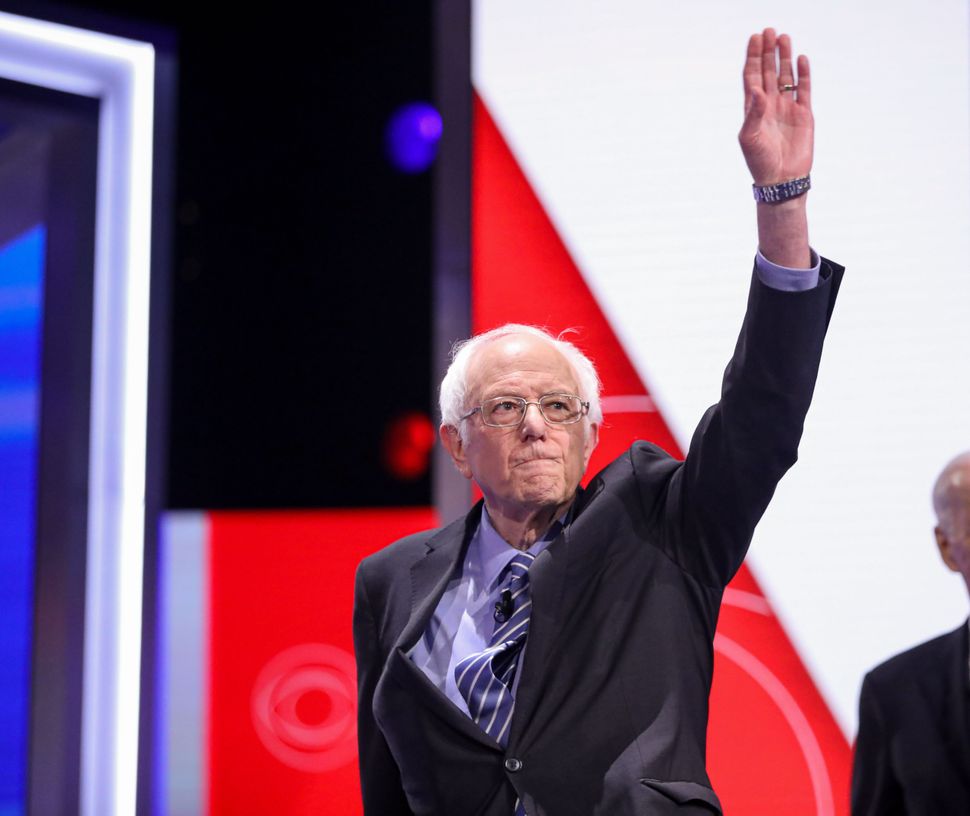 There was a very Jewish moment at last night’s Democratic debate in South Carolina. Moderator Major Garrett asked Senator Bernie Sanders to defend his decision not to attend the AIPAC 2020 conference, and to reassure American Jews who might feel nervous or insulted.

In response, Sanders reminded the audience of his Jewish identity and of the historical nature of his candidacy, and also took the opportunity to repeat his previous description of Netanyahu as a racist. “I am very proud of being Jewish. I actually lived in Israel for some months,” Sanders declared at the debate. “But what I happen to believe is that, right now, sadly, tragically, in Israel, through Bibi Netanyahu you have a reactionary racist who is running that country.”

The audience erupted in applause – which is just one reason why Sanders is making the right decision.

.@BernieSanders says he’s “very proud of being Jewish,” but calls @IsraeliPM Benjamin Netanyahu a “reactionary racist” and says that while the U.S. must defend Israel’s security, “you cannot ignore the suffering of the Palestinian people” #DemDebate https://t.co/nLka6l2vw9 pic.twitter.com/dXb0NG348Y

Sanders announced his decision to skip this year’s AIPAC conference on Sunday, in a fiery statement denouncing “the platform AIPAC provides for leaders who express bigotry and oppose basic Palestinian rights.”

AIPAC shot back with a statement calling Sanders’s decision “an odious attack on this mainstream, bipartisan American political event.”

But the truth is, AIPAC hasn’t been bipartisan in a long time.

As early as the 2016 election, AIPAC apologized for the fact that its own supporters applauded then-candidate Donald Trump’s partisan attacks on President Obama, four years after they had to remind their delegates not to boo Obama himself.

And just weeks before insisting on their bipartisan bona fides, AIPAC likewise had to apologize for a partisan attack ad calling Democrats “radicals,” the sort of statement they have never made about Republicans. (This even though a strong majority of American Jews identify as Democrats.)

Even former AIPAC staffers were outraged. Furthermore, AIPAC helped to fund a super PAC running attack ads against Sanders himself in Nevada.

If AIPAC is going to define itself as an increasingly partisan organization, with some of their leaders going so far as to bankroll attack ads against the Democratic frontrunner, they should not be shocked when Democrats respond in kind and skip AIPAC. After all, no one has ever criticized Republicans for skipping the J Street National Conference.

But there’s an even bigger argument against attending the AIPAC conference, and it has to do with which views we as a community are willing to legitimize by sharing a stage with them.

When Bernie Sanders says AIPAC hosts speakers “who express bigotry,” he is undeniably correct. Here are some people who will be speaking at the AIPAC 2020 annual conference next week:

Sebastian Kurz, the chancellor of Austria, who brought an Austrian political party founded by a literal former Nazi into the Austrian government, the first time since the end of World War II that a political party with Nazi origins became part of a European governing coalition — a party that only recently proposed requiring Jews to obtain permits to purchase kosher meat.

Also sharing the stage will be Péter Sztáray, Hungarian State Secretary for Security Policy and Multilateral Diplomacy, who will come as the official representative of a Hungarian prime minister who has called George Soros “an enemy that… speculates with money; does not have its own homeland but feels it owns the whole world.”

Then there’s Aleksandar Vučić, president of Serbia, who gave a speech just days after the July 1995 Srebrenica genocide of 8,000 Bosniak Muslims, the deadliest act of ethnic violence on European soil since the end of World War II, in which he declared, “You kill one Serb and we will kill 100 Muslims.” (Never again, indeed.)

The conference has in the past hosted such speakers as Steve Emerson, who absurdly claimed Muslims had taken over Birmingham, England. AIPAC likewise gave $60,000 to a group run by Frank Gaffney, who played a major role in convincing Trump to implement a Muslim ban, and whom the Reform Jewish movement called a purveyor of “anti-Muslim bigotry.”

And at least one major AIPAC donor has trafficked in traditional far-right anti-Semitism, sharing a classically anti-Semitic image of George Soros as a tentacled monster dominating the globe.

How can we ask our leaders to share a stage with such people?

Jewish groups have denounced the leadership of the Women’s March, in large part because founding leader Tamika Mallory attended an event with Louis Farrakhan.

Of course, some will say that sharing a stage with someone does not mean endorsing their views. But Jewish groups such as the World Jewish Congress refuse to extend that latitude to those who shared a stage with Farrakhan.

Moreover, AIPAC themselves have portrayed the decision to go speak to them at all as a political position, a form of “support for the US-Israel relationship.” According to AIPAC’s own statement, simply attending the conference means supporting their politics, at least to an extent. This renders demands that Bernie Sanders go to AIPAC in order to express dissent ring hollow.

Senator Sanders has never attended our conference and that is evident from his outrageous comment.

It’s hard to effectively express dissent when your very presence at an organization would be portrayed as an endorsement of their positions.

The fact is, we’re at a critical moment in the history of the US-Israel relationship. As Israel contemplates full annexation of the West Bank without extending voting rights to the Palestinian people living there, making the apartheid comparisons impossible to ignore, AIPAC continues to blend anodyne calls for “bipartisanship” with support for far-right plans for the region.

And as Israel moves increasingly toward illiberal policies, it is no wonder that support for Israel is increasingly coming from other illiberal regimes. That’s how we get AIPAC hosting a genocide advocate and an Austrian chancellor who allied with a party founded by actual Nazis.

We need something new. And AIPAC doesn’t offer it. But Bernie Sanders just might.

In a fight between the most successful Jewish candidate for US president and an increasingly partisan conference that is hosting anti-Muslim bigots, I know which side I’m on.

Joel Swanson is a Ph.D. student at the University of Chicago, studying modern Jewish intellectual history and the philosophy of religions. He has never attended an AIPAC conference and would never agree to do so. Find him on Twitter at @jh_swanson.