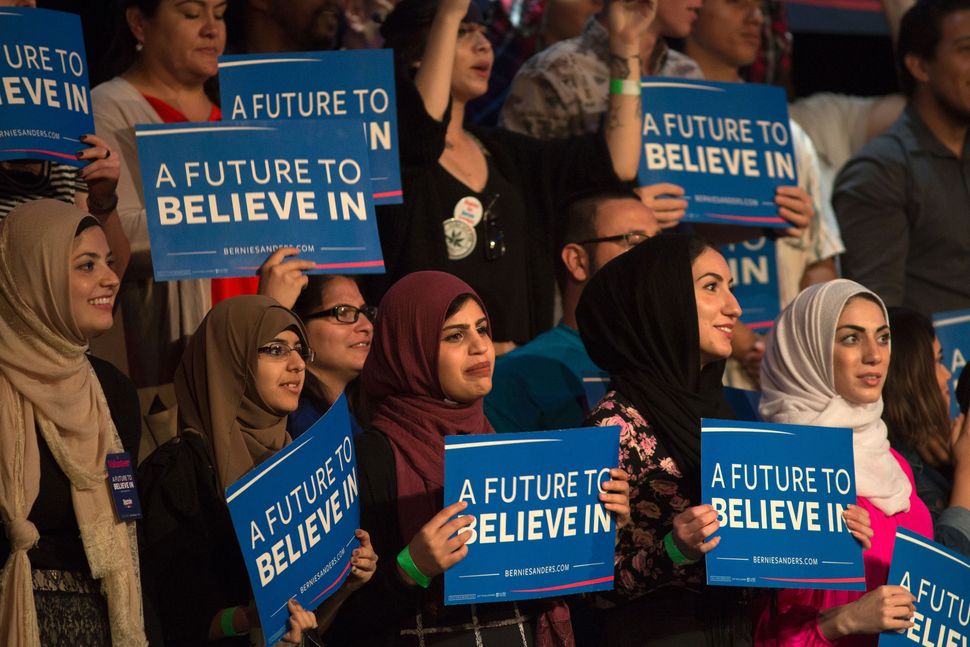 I rarely go to the mosque, but the week that Trump was elected, I attended Friday prayers. My vision was blurry, and it had been a few days since I last slept, but it’s always in those moments, humbled and afraid, that I come crawling back to God.

A group of local rabbis joined the sermon. A man with kind eyes addressed us: “We have heard this language before, we are prepared for the hard times ahead, and our community stands with you.”

Praying afterwards, forehead and palms pressed to the ground, my eyes filled with tears. I was still frightened, but I was moved and reassured by the generosity of a community who has suffered the worst possible persecution channeling their pain to defend others.

As a Muslim American, I have often bonded with Jewish Americans over our shared experience of being a religious minority, especially over the past three years. Islamophobia and anti-Semitism have both increased under the vitriol of Trump’s presidency: Two years ago, a white supremacist attacked a synagogue in Pittsburgh, killing eleven people, the largest targeted killing of a Jewish community in American history; and Trump’s signature Muslim ban has torn apart families, legally sanctioned discriminatory immigration policies, and fueled xenophobia.

And it’s in this fellowship born of grief and fear between Muslims and Jews that Bernie Sanders’ campaign is poised to make a deep impact.

Sanders enjoys large Muslim support, especially among younger Muslim Americans who affectionately refer to him as “Uncle Bernie.” When Sanders had a heart attack in October, a WhatsApp chain of Muslims praying for his health went viral. Many have noted this popularity with surprise, as though it is unnatural for Muslims to support a Jewish candidate. And yet, Muslims support Sanders for the same reasons that other Americans support him: his strong commitment to social reform, his consistent foreign policy stance against the constant barrage of U.S interventionism, and his stance on the Israeli-Palestinian conflict.

The affinity for Uncle Bernie makes sense to me. The notion that Muslims and Jews are locked in immortal combat, while Christians and Jews naturally share a common cause, is ahistorical. America’s notion of itself as built on “Christian values” had an awkward ring after World War II, so the slogan morphed into “Judeo-Christian values,” a term which people like Steve Bannon have used to stoke Islamophobia. But the phrase has no real meaning except to divide our communities from each other. There is no inherent reason for the Jewish and the Muslim communities to be in disunity.

And it’s this unity that Bernie represents. If elected to office, Sanders would be the first Jewish American president of the United States; when was asked at a CNN town hall in South Carolina what his Jewish identity means to him, Sanders spoke about growing up in a neighborhood with Holocaust survivors, and how that stark experience taught him at an early age the stakes of fighting white supremacy.

“I remember as a kid looking at these big picture books of World War II and tears would roll down my cheeks,” Sanders says about his Jewish heritage. “The pain that my family, my father’s family suffered in Poland is something that has impacted my life absolutely” #CNNTownHall pic.twitter.com/Uhj3pAWaCE

Sanders views his Jewish identity as part and parcel of the fight against racism, a fight that unites our communities. And it’s his pride in his Jewish identity that makes him fight for a just solution to the Israeli/Palestinian conflict, as he said in Tuesday night’s debate in South Carolina.

And yet, Sanders’ criticism of the Israeli government has led some conservatives to label him anti-Semitic, or to suggest that if Sanders is nominated, most Jewish Americans will vote for Trump.

If Sanders is the nominee, Trump will win a majority of Jewish voters

Polling gives strong reason to doubt this claim. Jewish Americans, like all Americans, are not single-issue voters. More importantly, the Palestinian-Israeli conflict is about geopolitics, not faith. Support for Israel is not solely Jewish, and neither do all Jews support Israel unconditionally. Meanwhile, Christian Evangelical Americans are among the most ardent Zionists. And while there is widespread support for the Palestinian cause in many Muslim American communities, support for Palestine is not solely Muslim.

The truth is, Jews and Muslims are in this together. Anti-Semitism and Islamophobia share a script: A religious minority is secretly scheming to take over the country from its rightful white Protestant owners. The tiki-torch carrying terrorists in Charlottesville who Trump called fine people chanted “Jews will not replace us.” Trump and other conservatives cry anti-Semitism to score political points, while endangering Jews, Muslims, and countless others with their white supremacist dog whistles.

Sanders represents an opportunity to bring Muslims, Jews, and others together into coalition with each other in order to fight white supremacy.

As Uncle Bernie’s campaign would have it, not me, us.

Yasmine Flodin-Ali is a Religious Studies PhD Student at the University of North Carolina at Chapel Hill where she studies the relationship between race and religion and the history of Muslim racialization in the United States.