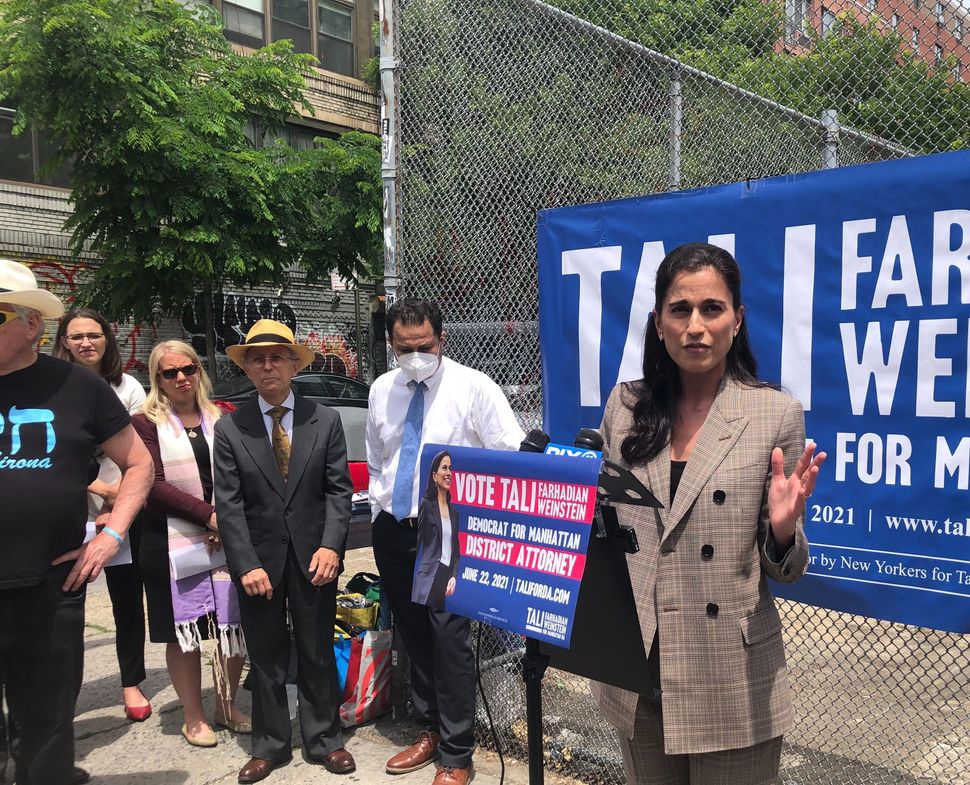 Tali Farhadian Weinstein, one of the leading candidates for Manhattan district attorney, dismissed questions Wednesday about how her past contacts with the Trump administration might complicate the office’s inquiry into the former president if she’s elected.

The New York Times reported on Wednesday that Farhadian Weinstein, a former federal prosecutor, was interviewed by former Trump administration officials for a federal judgeship early in his term and that his advisors have said he will try to impugn the motives of any prosecutor who goes after him.

But Farhadian Weinstein says the concerns are moot.

“We’re quite constrained, as prosecutors, not to go in and prejudge anything and to casually talk about legal arguments,” Farhadian Weinstein, 45, told the Forward following a campaign event on the Lower East Side of Manhattan. “It just wouldn’t be right for me to spitball anything about it. This is part of what it means to be a good, well-trained and ethical prosecutor.”

Farhadian Weinstein, who is Jewish, is a former federal prosecutor and one of eight candidates running in the June 22 Democratic primary to succeed Cyrus Vance, Jr., who is retiring at the end of year. She has the backing of Democratic Reps. Ritchie Torres, Nydia Velázquez and Adriano Espaillat, among other local politicians.

Jennifer Blatus, a spokeswoman for Farhadian Weinstein, suggested that her willingness to be considered for a judgeship during Trump’s years in office should be seen in a positive light. “I think that it would have been good to see a pro-immigrant, pro-choice judge at a time of a chaotic state of affairs at the begining on the Trump administraiton,” she said.

Blatus added that if selected as judge, Farhadian Weinstein would be guided by the U.S. Constitution and “not serve at the pleasure of the president.”

On Wednesday, Farhadian Weinstein held a rally to condemn the recent rise in violent anti-Asian and antisemitic attacks across the city. She was four years old when she and her parents fled Iran out of fear of persecution during the 1979 revolution. 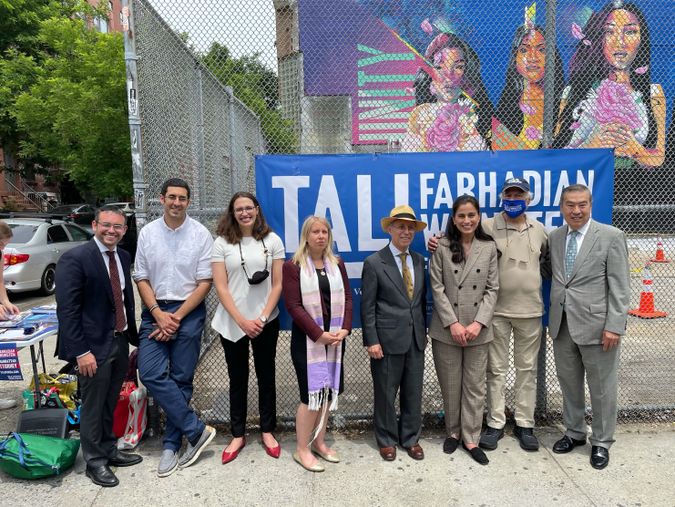 Tali Farhadian Weinstein, candidate for Manhattan district attorney, stands with faith leaders, community leaders and advocates to rally against Antisemitism and Anti-Asian hate on the Lower East Side. Image by Courtesy

“I’m an immigrant. I’m a parent. I’m a prosecutor, I’m a professor. I’m a proven criminal justice reformer, and I’m a candidate for district attorney, and I’m here today for all of those reasons,“ said Farhadian Weinstein, flanked by faith leaders and community activists, including her father Nasser Dan Farhadian,

“What has occurred over this past year is horrific and unacceptable,” she continued, “and I am here to state unequivocally that antisemitism and hate have no place in New York.”

Last year, Farhadian Weinstein, as a member of the New York State Bar Association’s task force on hate crimes and domestic terrorism, released a number of legislative and other reform proposals to address acts of hate.

Farhadian Weinstein said in an interview that it’s important to “cut through the confusion” around the recent violent attacks against Jews in New York, Los Angeles and other American cities last month in the wake of the conflict in the Middle East. “We have to say that when you attack somebody because of who they are, that is a hate crime,” she explained. “Even just cutting out all that noise, clarifying those underlying prejudices and standing up against it, is really important because then the call to action follows through.”