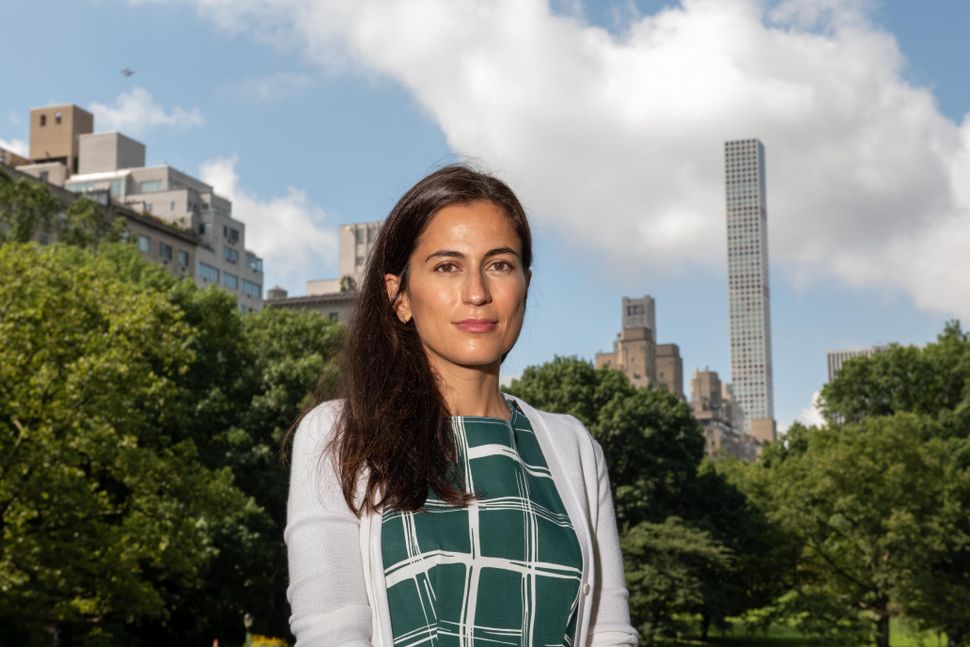 Tali Farhadian Weinstein was working on her very first writing assignment as a clerk for Supreme Court Justice Sandra Day O’Connor when the justice herself stopped by.

“Get your shoes on,” she told the recent Yale Law School graduate. “We’re going to see the Dan Flavin exhibit at the National Gallery.”

The opinion had to be prepared in time for a deadline, Farhadian Weinstein gently reminded the justice. “What would you like me to do?” she asked O’ Connor.

“I want both,” the justice said.

“That’s who she was,” said Farhadian Weinstein, 44, in an interview this week. “To push hard in every direction.”

Farhadian Weinstein started that clerkship in October, 2004. But the exchange has stayed with her, and this week, she resigned her position as general counsel at the Brooklyn district attorney’s office to announce her campaign for Manhattan district attorney.

“Launching a campaign during a pandemic was definitely not what I imagined,” Farhadian Weinstein said, sitting down on a park bench next to the Alice in Wonderland statue in Central Park on a sunny midsummer day. “Did I expect my children to be going to school during the day during the busiest year of their mother’s life? Yes, I did.”

The 2021 ballot is crowded. She’s running against seven others — including, presumably, incumbent Manhattan District Attorney Cyrus Vance, Jr., who has not yet announced his campaign. While Vance successfully got a Supreme Court ruling to support his bid to subpoena President Donald Trump’s tax returns, as well as convicted Harvey Weinstein, critics say he has mishandled sexual assault cases and favored defendants who are wealthy and powerful.

Farhadian Weinstein has been on the hard and fast track ever since she came to this country.

She was born in Tehran where, she recounted, Jews were “afraid to go to work and even to leave the house.” She was four years old when her parents fled Iran, arriving in the United States in 1979.

She grew up in Englewood Cliffs, N.J., attending yeshiva day schools — Moriah and then Frisch — before going on to Yale and a Rhodes scholarship at Oxford.

“Tali was always very poised, very thoughtful in what she says and how she listens,” said Becky Voorwinde, who first met Farhadian Weinstein as a teenager during a Bronfman Fellowship in Israel in 1997. “I do remember us saying, ‘Oh Tali, she is going to be a Supreme Court justice one day,’” said Voorwinde, who is now the executive director of the Bronfman Fellowships.

After law school, Farhadian Weinstein went on to clerk for both O’Connor and Merrick Garland in the U.S. Court of Appeals for the D.C. Circuit, served as counsel to Attorney General Eric Holder under the Obama administration and worked as an assistant US Attorney in the Eastern District of New York.

“I wanted to be of service, in the world, in an active way,” she said. “I knew I wanted to be a public servant. I was always thinking about government and institutions, how to harness power to make things better.”

She spent the majority of her career in the Department of Justice, from 2009 to 2017. It wasn’t easy for a young woman, said Laurie Robinson, a law professor at George Mason University and former assistant attorney general under Eric Holder.

“The Department of Justice was, and is still, a very male culture,” Robinson said. “Tali handled that with skill and with grace. I was extremely impressed by her, a very young, soft-spoken and gentle individual, so incredibly whip-smart and deep in her analysis of things in meetings.”

In 2010, Farhadian Weinstein moved to New York City and married Boaz Weinstein, founder of the $3 billion Saba Capital hedge fund; the couple now has three young daughters, and lives on the Upper East Side.

Over the years, she has served on the board of the New York Public Library and the UJA. Their wealth has provoked pushback from the anti-Wall Street left. Opponent Eliza Orlins described Farhadian Weinstein as “another candidate who is cozy with the rich and powerful and the privileged.” Financial industry site Dealbreaker called her a “hedge fund wife.”

But Farhadian Weinstein dismissed those kind of comments as misogyny. “Maybe we should start calling Boaz a prosecutor’s husband,” she said, adding that she has demonstrated both her ability and her progressive priorities.

As counsel to Brooklyn’s district attorney Eric Gonzalez, she led a successful federal lawsuit against U.S. Immigration and Customs Enforcement arrests of undocumented immigrants around courthouses. In her campaign, she supports abolishing cash bail and aims to create a prosecution unit focused on gender-based and domestic violence.

“Domestic violence was a pandemic before anyone ever heard of Covid,” she said. “Now, we have to lean in even harder. Economic and emotional distress exacerbates it.” In May, the Weinsteins gave $2 million to non-profits helping domestic violence victims.

Anti-Semitism in New York is another concern for her — one that hits close to home. “I’m hearing, anecdotally, people telling their boys to wear baseball caps to hide their kippahs,” she said. “We can’t be complacent about that. This is very much within the DA’s job to prosecute and educate.” She served on the New York State Bar Association’s task force on domestic terrorism and hate crimes, which in June recommended judges to consider imposing education components when prosecuting those who have committed hate crimes. “We need to learn to see each other differently,” she said.

Being an “other” — an immigrant — has become an essential part of her campaign, too. Late last year, she wrote an op-ed in the New York Times, recounting her family’s flight from Iran, and the compassion of one unnamed border official who permitted them into this country.

“Law enforcement requires us to exercise our humanity and sense of justice, always mindful of the demands of safety, in individual cases,” she wrote. “Discretion in law enforcement can be abused, of course, but the alternative — the letter of the law without the spirit of the law — is worse.”

Farhadian Weinstein said that both the letter and the spirit of the law guide her, in her work. “You are often meeting people at the worst and lowest point of their life,” she said. “You’re just going to do your job better if you approach all of the actors with empathy.”

Correction: An earlier version of this article incorrectly stated that the Manhattan DA could require judges to consider imposing education components; in fact, only recommendations can be made by New York State Bar Association’s task forces.