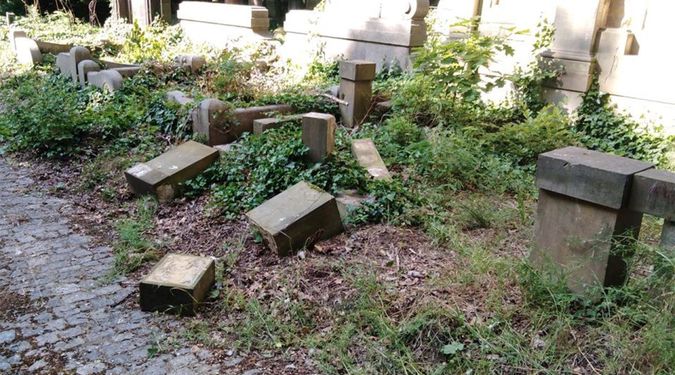 Toppled and smashed headstones lie scattered at the Jewish Cemetery of Wroclaw, Poland, June 16, 2021. Courtesy of The Jewish Community of Wroclaw

(JTA) — Several children in Poland toppled 63 headstones of Jewish graves because they wanted to use the slabs to build a fortress, they told police.

The group of five 12-year-olds had been working on the project for several days at the disused graveyard in Wroclaw, in western Poland, Gazeta Wyborcza reported Thursday. Police stopped them upon hearing hammering noises on Wednesday. Some of the headstones were smashed. Others were partially damaged and knocked down.

In a separate incident last week in eastern France, graffiti saying “Allah akba,” or God is great in Arabic, was left at the entrance to a Jewish cemetery in Strasbourg, France Bleu reported last week. There are no suspects.

In eastern Poland this week, a headstone from a Jewish grave that was used decades ago as construction material in Kraśnik was extracted from a sidewalk and placed at the local Jewish cemetery, TVN24 reported. The headstone was discovered three years ago after the pavement over it cracked. The bureaucratic action that launched then to replace the stone bore fruit this week.

In southern Poland, the city of Bielsko-Biala is planning a commemorative space featuring Jewish headstones in recognition of the destruction of the Jewish cemetery there in the 1960s. A sports center was built on the site, Gazeta Wyborcza reported earlier this month.

The post Polish schoolchildren destroyed dozens of Jewish headstones. They said they wanted to build a fortress. appeared first on Jewish Telegraphic Agency.