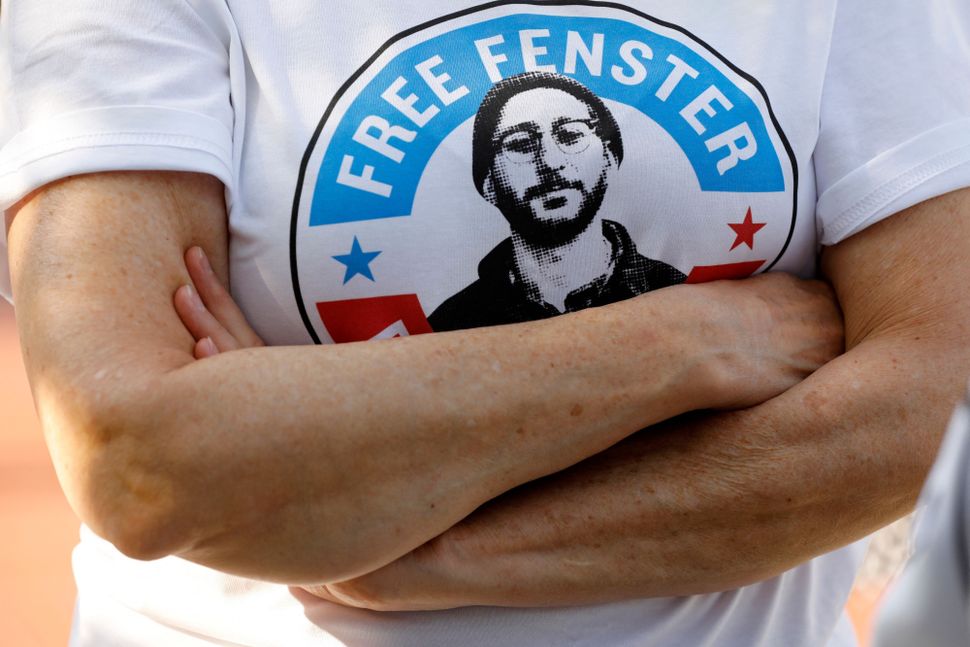 A man wears a t-shirt demanding the release of Danny Fenster. Part of the proceeds from the t-shirt sale, organized by Fenster’s family, will go to a charity of Fenster’s choice upon his release. By JEFF KOWALSKY/AFP via Getty Images

American journalist Danny Fenster appeared at his first court hearing since his detention on unknown charges by Myanmar’s junta regime.

Fenster stood before a panel of judges in a special court inside the Insein prison in Yangon, Myanmar, on June 17 after more than three weeks in jail.

Fenster’s family and friends hoped the judges would send the 37-year-old Detroit native back to the United States. But the panel remanded him to custody for another two weeks.

His next hearing is scheduled for July 1.

Fenster, who has served as a managing editor at the publication Frontier Myanmar since August 2020, is facing charges under an amendment to the penal code added after the military coup took control of the government in Myanmar in early February 2021.

A former journalist based in Myanmar told the Forward that Fenster’s Jewish background likely plays no role in his detention.

His Jewish affiliation, “is pretty much not a thing,” said the former journalist, who demanded anonymity based on his fears of reprisal against contacts in Myanmar. “There’s simply no telling what those rascals in Naypyidaw will do. They’re a paranoid bunch.”

The amendment is frequently used to target journalists and activists. At the hearing, there was no specific reason given for the filing of the charges against Fenster, and Frontier asserts that Fenster “has done nothing to warrant this charge.”

If convicted, he could potentially face three years in prison, a fine, or both.

While no staff members at Frontier were permitted to view the hearing, they were able to talk to lawyer U Than Zaw Aung, who is representing Fenster and who also represented Reuters journalists Wa Lone and Kyaw Soe Oo in 2018. Than Zaw Aung reported that Danny is in good health and determined to be reunited with friends and family as soon as possible.

“We are doing what we can to support him, as well as his family and friends, until he is freed,” said Frontier in a statement.

Fenster was first detained on May 24 at the Yangon International Airport, where he was about to catch a flight to surprise his family back in the United States. Fenster had been working in Myanmar since 2019, and hasn’t seen his family in over three years.

Fenster’s detainment is part of a larger trend of the military junta attempting to silence the free press. He is one of about 90 journalists who have been imprisoned since the military coup in early February. So far, less than half of these journalists have been released, according to recent numbers from the Assistance Association for Political Prisoners Burma.

In a statement, U.S. Rep. Andy Levin, D-Bloomfield Township, communicated that Fenster has yet to be given consular access to U.S. government officials, nor were they allowed to attend his hearing. Levin also calls for his immediate and unconditional release.

Nathan Maung, another American journalist based in Myanmar, was released from detention and deported back to the U.S. on June 14, after having been detained since March 9. He was also charged with crimes under Section 505a of the Penal Code.