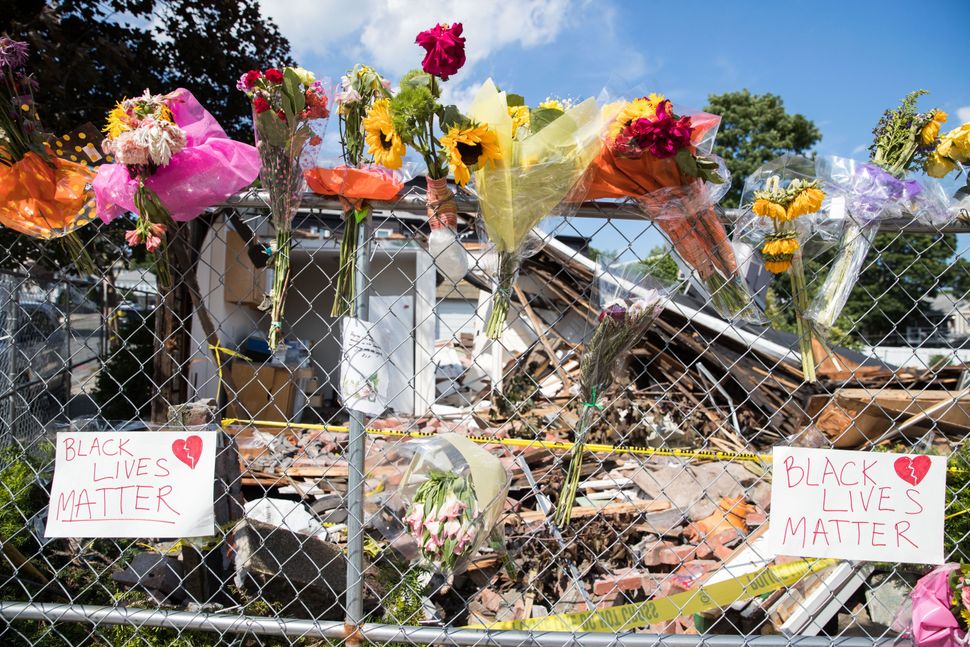 Flowers and notes left at the site where the armed man crashed into a house and then shot dead David Green and Ramona Cooper. By Scott Eisen/Getty Images

A man whom authorities say left behind a notebook filled with antisemitic and racist entries shot two Black people dead on a neighborhood street in a suburb of Boston.

Nathan Allen, 28, crashed a stolen box truck into a small house on Saturday, exited the vehicle, and opened fire on David Green, 58, and Ramona Cooper, 60, killing both.

An officer who arrived at the scene shot and killed Allen.

While investigators do not know what Nathan Allen’s ultimate destination was, Suffolk County District Attorney Rachael Rollins noted that there was a synagogue within two miles of the attack.

“I am confident saying that there was hate in this man’s heart,” she told reporters in a press conference.

Several white neighbors were also in the street, according to a Boston Globe report, but were left physically unharmed.

“They are alive, and these two visible people of color are not,” Rollins said

Allen had stolen a white box truck earlier in the day, and after crashing head-on into an SUV, Allen lost control of the vehicle and crashed it into the front of a small home, reducing the house to rubble as he exited the truck. He then shot Green and Cooper before being fatally wounded in an encounter with a responding officer.

Green, who was an Air Force veteran and worked as a state trooper for almost 40 years before retiring in 2016, had arrived on the scene in order to apprehend Allen, after hearing the sounds of the car crash and the subsequent gunshots from his front yard two blocks away. Cooper, also an Air Force veteran, had already been shot. She later died in the hospital.

Allen had not been on the district attorney’s radar before this incident. He had no criminal record, worked as a physical therapist, and his social media reveals only pictures of his wife, whom he had married last September.

“Apparent hate crime in Winthrop is another example of the grave threat extremist ideologies pose to our communities. Thank you to District Attorney Rollins and Winthrop Police for investigating as a hate crime. Time to dismantle racist and antisemitic ideologies that fuel hate and violence,” The Anti-Defamation League of New England wrote in a Twitter statement on the carnage. Massachusetts Governor Charlie Baker called the events “a despicable act” and added “Rest in peace Trooper Green and USAF Veteran Cooper.”

As the weekend passed, flowers, candles, and homemade signs slowly replaced the carnage near the site where Cooper and Green were killed, creating makeshift shrines to honor the victims.