Dispatch from Surfside’s only kosher market 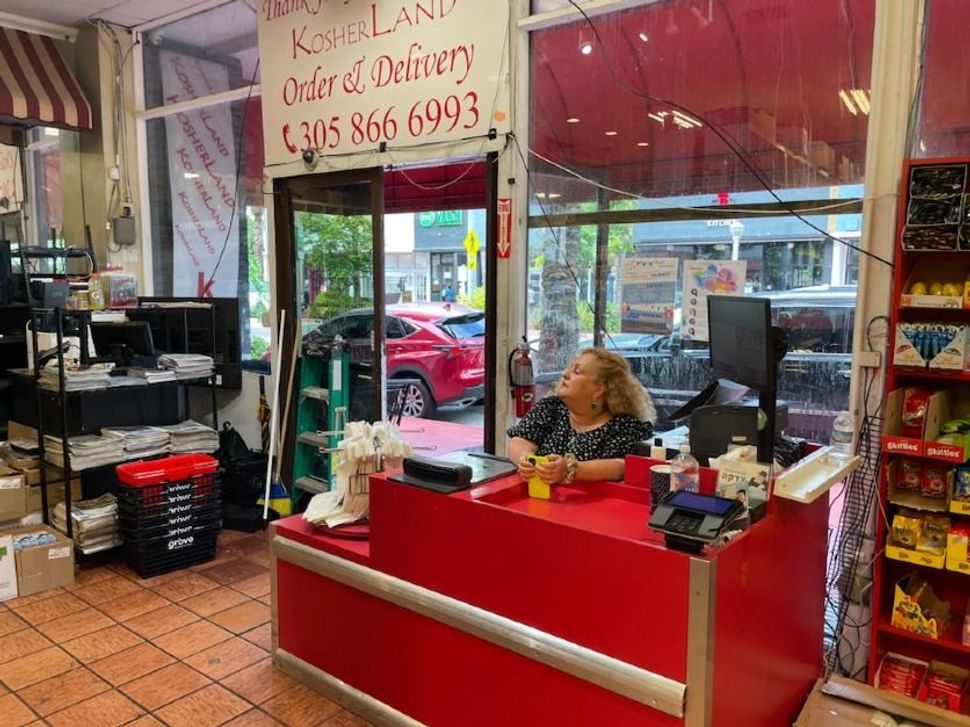 Sandra Hirsch has worked at Kosherland in Surfside, Fla., for 16 years. By Louis Keene

To get a sense of how Surfside’s Jewish community has grown in recent years, head to Kosherland, a humble three-aisle grocery located a few blocks from the collapsed Champlain South condominium, and try to buy milk.

Kosherland is the only kosher market in Surfside, and soon it will expand into the neighboring two storefronts. But on Wednesday morning, it was all out of milk — and Sandra Hirsch, who has been working the cash register here for 16 years, said it wouldn’t be getting a delivery until the afternoon.

The growth of the Jewish community in recent years has meant the store is often scrambling to keep up with demand. A 2014 Jewish population study of Greater Miami by Ira Sheskin counted about 14,000 people — including more than 5,000 Jews — in Surfside and the other small cities that make up the northern part of Miami Beach.

There are also about a dozen kosher restaurants in the vicinity.

Hirsch, who wears a necklace bearing her name in Hebrew, is a mayoral figure in this interwoven, diverse community with a small town feel. She wound up behind the register at Kosherland after she spotted a “Help Wanted” sign in the window. It’s a social job. She strikes up a conversation with nearly everyone who walks in the door, knows their stories, asks about their lives.

Hirsch knew many of the victims of the Champlain tower collapse, including Brad Cohen, a physician who is still among the missing. Tears streamed down her cheek at the thought of what they went through.

“It’s not only that they died, it’s how they died,” Hirsch said. “Like if they suffered, if they didn’t, if they died right away. You’re never gonna know.”

She didn’t have specific memories of the people she knew — they were mostly passing interactions, small talk about their spouses, their kids. Now, she said, the thought of those kids breaks her heart.

Much of the community — Jewish and non-Jewish — has a Latin flavor, with immigrants coming from, among other places, Cuba, Puerto Rico, Columbia, Venezuela and Mexico.

Hirsch, moved from her native Brazil to South Florida as an employee of the Intercontinental Hotels as a young adult, fell in love with the place — and her eventual husband — and has lived here ever since.

Dispatch from Surfside’s only kosher market