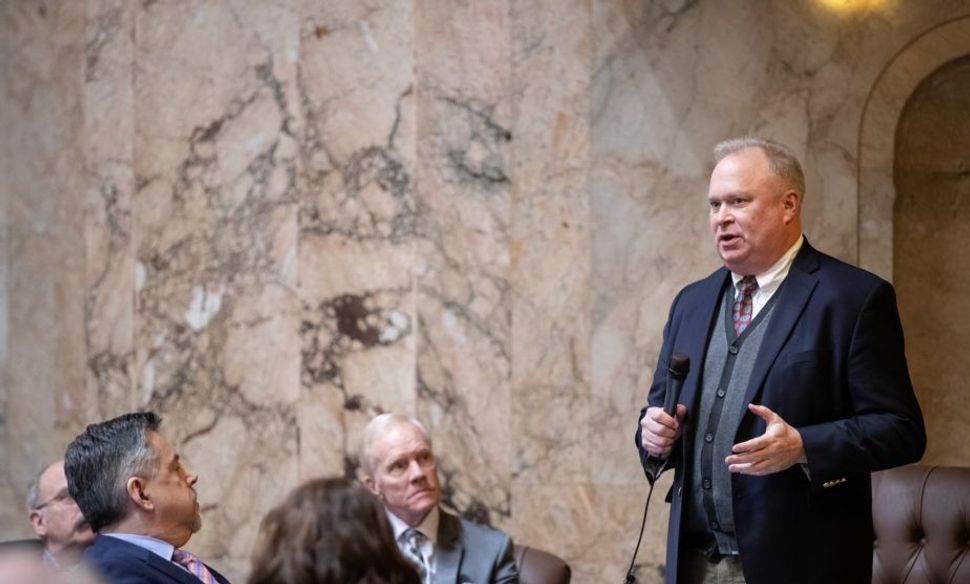 A Washington state lawmaker has apologized for wearing a yellow Star of David, a universal symbol of the Holocaust, during a recent speech decrying the state government’s coronavirus vaccination campaign as well as restrictions that have been in place since the pandemic began.

“It’s an echo from history,” Jim Walsh, a Republican member of the state’s House of Representatives, wrote in the comments section of a live stream of his speech to conservative activists in Lacey, Washington on Saturday. “In the current context, we’re all Jews.” The video has since been removed. 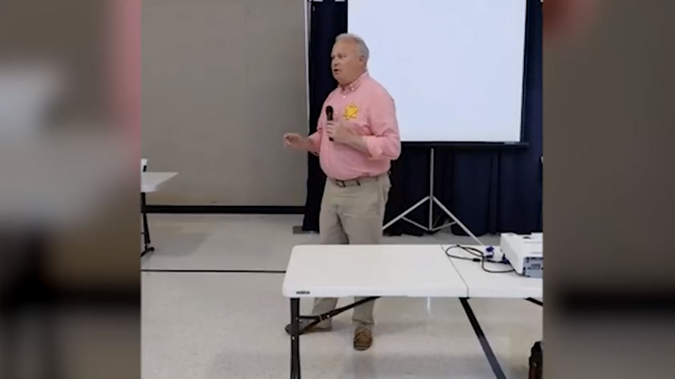 Washington State Rep. Jim Walsh wearing a yellow Star of David during a speech to a conservative group at a church in Lacey, Thurston County, on Saturday. Image by Screenshot

Representative Tana Senn, a Democrat and chair of the House Jewish Caucus, said in a statement that Walsh’s remarks at the event, “equating the systemic extermination of the Jewish people at the hands of the Nazis to public health requirements meant to keep our community safe and healthy,” was “deeply antisemitic.”

Walsh initially dismissed the criticism, after it was reported by The Seattle Times, calling his action a “sign of solidarity.” But later in the day, he issued an apology. “This gesture went too far,” Walsh said in an interview on the Jason Ratz Show, a local conservative radio program. “It was inappropriate and offensive. I’m terribly sorry that it happened and that I was a part of it.”

He maintained that his intent was to highlight the government’s overreach with the COVID-19 restrictions and guidelines. “These processes of denying people their rights, their civil liberties, may begin innocuously, but they can lead to terrible outcomes,” Walsh said. He added that the use of the symbol was to compare “common humanity and frustration whenever anyone is objectified and minimized.”

But after the backlash he understood it was a “dumb idea” to wear the star. “It was an idea that just didn’t execute effectively, and for that I’m terribly sorry,” he said.

In the interview, Walsh repeated the comparison he made but acknowledged that “the imagery” went too far. “I would not do this kind of thing again, he said. “It’s too far, it’s too much to be an effective tool.”

He also described the reaction from his Republican colleagues as mute. “There was some concern, wanting to know why it happened, what was going on, what the spirit of the day was there and why this would take place,” he said. “I would say, you probably could call that pushback, a little bit. But more questioning than just pushing back straight away.”

Walsh follows a pattern set by other Republican lawmakers who have used Holocaust analogies to express their doubts about the vaccines and opposition to stricter public safety measures. Madison Cawthorn, a Republican from North Carolina, made a similar comparison about possible vaccine passports. Ben Carpenter, an Alaska state lawmaker, compared health screening stickers to the yellow badges. Another Alaskan Republican, House Rep. Ron Gillham, posted an image on Wednesday that compared medical experts and members of the media who share information about COVID-19 vaccines to Nazi war criminals.

Marjorie Taylor Greene, a Republican congresswoman from Georgia, recently compared vaccination and mask requirements to the Nazi rule during the Holocaust. Greene later apologized and visited the U.S. Holocaust Memorial Museum in Washington, D.C. after widespread condemnation and a threat to be censured.

In her statement condemning Walsh’s action and remarks, Senn, the Jewish Caucus chairwoman, urged Walsh to visit the state’s Holocaust Center for Humanity “and speak with a Holocaust survivor to better understand the enormity of murdering six million Jews.”