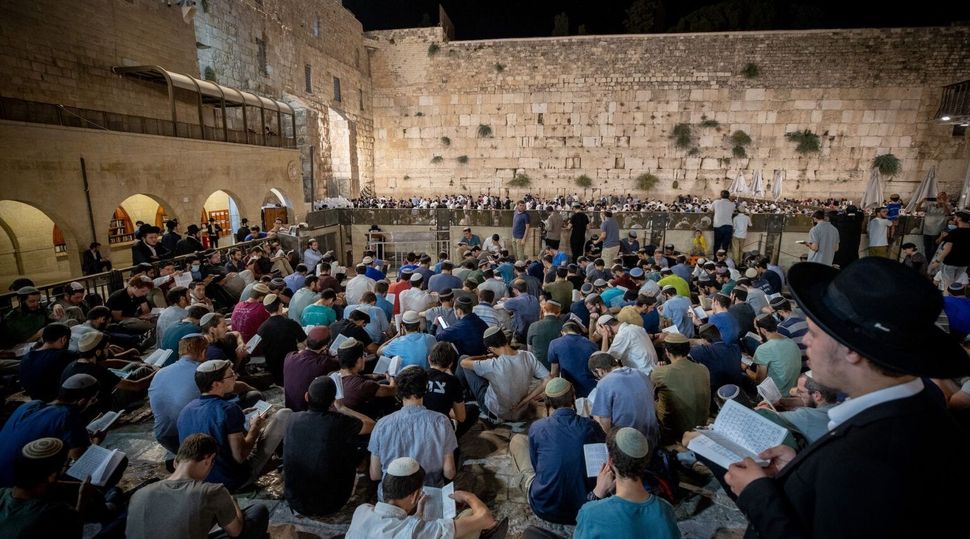 Jewish men pray at the Western Wall on the eve of Tisha B’Av in the Old City of Jerusalem, July 17, 2021. Photo by Yonatan Sindel/Flash90

(JTA) — A crowd of Orthodox men disrupted a Conservative prayer service on Tisha B’Av, a Jewish day of mourning, at the Western Wall — shouting down worshippers, attempting to block the entrance and setting up a makeshift divider meant to separate between men and women.

The disturbance happened on Saturday night at the non-Orthodox section of the Western Wall in Jerusalem, Judaism’s holiest prayer site, where the Jewish Holy Temples once stood. The Western Wall’s main plaza allows only Orthodox prayer, which is gender-segregated. Non-Orthodox groups gather to the south of the main plaza, at a section of the wall where people of all genders are allowed to pray together.

When a group of Conservative Jewish worshippers came to the non-Orthodox section on Saturday night, they were met by a crowd of Orthodox men who attempted to occupy the site, block the entrance and prevent the Conservative service.

The Orthodox men set up a mechitza, meant to divide between men and women, and shouted and sang as the worshippers read the book of Eicha, or Lamentations, which is read on Tisha B’Av to mourn the destruction of the two Holy Temples.

Israeli non-Orthodox leaders drew a link between the incident and the string of Jewish tragedies commemorated on Tisha B’Av, including the destruction of the two Holy Temples. Rakefet Ginsberg, the executive director of the Masorti (Conservative) Movement in Israel, wrote on Facebook that the incident drives home the danger of “baseless hatred” between Jews, an idea Jewish sages have historically associated with the Temples’ destruction.

“Yesterday evening, it was possible to see, with one’s own eyes, how baseless hatred and fanaticism lead to destruction,” she wrote. Conservative leaders in the United States also condemned the disruption.

Rabbi Gilad Kariv, the first Reform rabbi elected to Israel’s parliament, wrote on Facebook, “If there’s one lesson to Tisha B’Av, it’s that the fire of extremism and hate won’t stop here and will continue to threaten more and more parts of Israeli society.”

Kariv called on the government to implement an agreement approved in 2016 that would have expanded the egalitarian section and formalized its status in Israeli law. Former Israeli Prime Minister Benjamin Netanyahu scrapped the agreement in 2017 under pressure from his Haredi Orthodox allies, but current Prime Minister Naftali Bennett has signaled that he is open to implementing it.