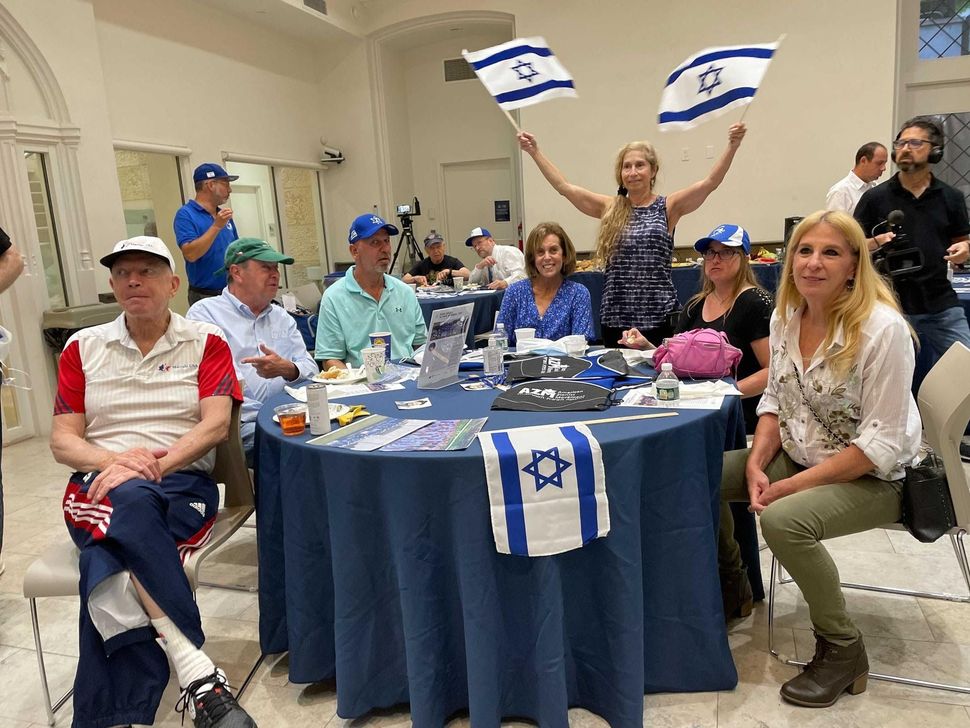 Adrienne Katz wished she could have been in Tokyo, watching her son, American-born pitcher Alex Katz, pitch for Team Israel against South Korea — an experience COVID restrictions denied her. But the next best thing was to gather with other fans at the Jewish National Fund on the Upper East Side of Manhattan, where — at 6 a.m. — plenty of hot coffee greeted about 25 people who had set their alarms extra early for the team’s first Olympic match-up.

“It’s unprecedented. A mother should be at their kid’s Olympic game,” said Katz, who was accompanied by her husband, Gary, and close family members,

Though Israel is ranked 24th in the world and South Korea third, the game was excruciatingly close. Israel hit three home runs and at one point led 4-2, and then tied it up 5-5 in the bottom of the ninth.

It was almost too much to bear for Long Island’s Adrienne Katz, who held an Israeli flag in each hand and stuck close to the television screen. “Come on, let’s do this!” she shouted at it. 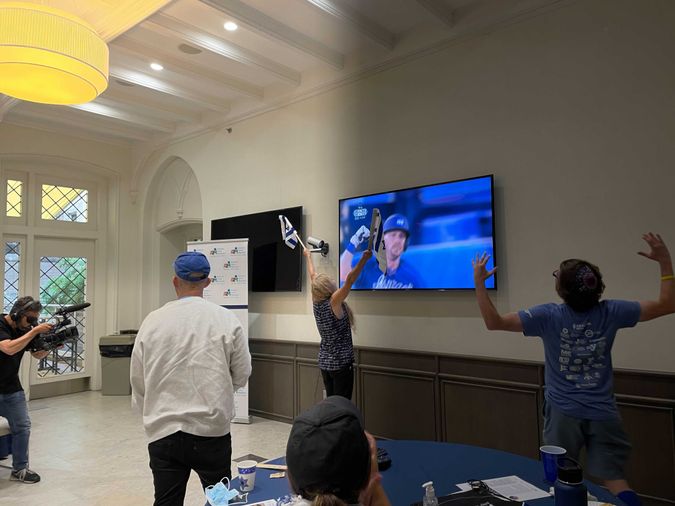 Adrienne Katz cheering on her son, American-born pitcher Alex Katz and Team Israel against South Korea at the Olympics in Tokyo. Image by Jacob Kornbluh

About 25 people had shown up to cheer on the mostly American-born team, many of whom only recently acquired Israeli citizenship to qualify to play for Israel.

A modern-Orthodox rabbi, a Holocaust survivor and a Labor Zionist activist were among the early risers, chatting about baseball not far from a table where an assortment of bagels and cheeses were set out alongside the coffee and cans of sparkling wine.

Paul Adam, a young adult wearing a t-shirt that deemed him an “Official Mensch,” coached the team on the screen. “Brachot, Israel” and “Yeah, they are actually playing,” he said as the Israelis got a hit or scored. Between batters, he suggested to his fellow fans that Israel’s foreign ministry use baseball as a way to promote the Jewish state. He imagines a baseball stadium in Jerusalem.

Herb Block, executive director of the American Zionist Movement, which hosted the event, was hopeful even when Israel was losing. “The Jewish people come back,” he said. “We are resilient.”

The game went to extra innings. But Team Israel lost to South Korea in the most heartbreaking of ways. Jeremy Bleich, the former Oakland A, forced in game-winning runs after hitting South Korean batters with consecutive pitches. Final score: 6-5.

Katz tried to be forgiving. “It’s a stupid way to lose a game,” she said. “But as a pitcher’s mom, I feel for him.”

Israel’s team, one of six to qualify for the Olympic games, returns to the field on Friday against the U.S.

“Israel is going to win tomorrow,” Katz declared. “I want our whole team to come home with a gold medal and make Israel a baseball nation.”

Her husband Gary beamed with pride. “He worked very hard his whole life,” he said. “We went out every single day of our lives to play baseball.”

AZM’s Block said the organization came up with the idea of hosting a watch party to bring American Jews and Zionists together. “Here was an opportunity to get everyone sitting at one table watching a national sport being played by a team from our Jewish national homeland, and no one was talking about the Kotel or the other hot issues of the day,” he said.

This reporter, who is originally from England, did not grow up with baseball and never learned to love the game. Still, Block seemed satisfied. “The best part of the day was that Jacob Kornbluh got to watch a baseball game,” he said.