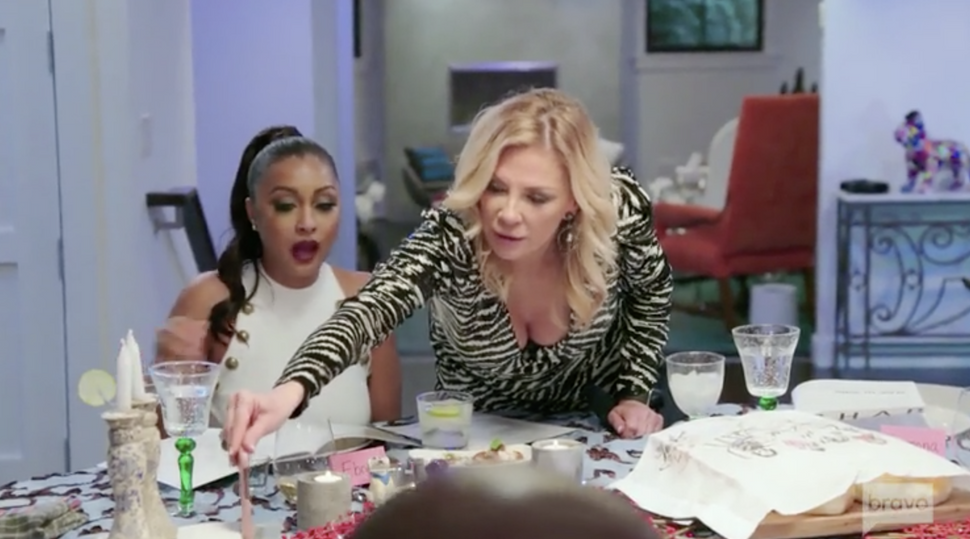 Eboni Williams, left, convened her fellow cast members for a Shabbat dinner on Bravo’s “The Real Housewives of New York City,” in an episode that aired Aug. 11, 2021. Image by Screenshot from show

(JTA) — Many people have curbed or curtailed their big Shabbat dinners during the COVID-19 pandemic, but not the cast of the “The Real Housewives of New York City.”

On the episode that aired Tuesday, the cast of the Bravo reality TV series about socialites in the city is shown attending a drama-filled event described as “Black Shabbat” by its host.

Eboni Williams, the show’s first Black cast member, hosted the dinner at the home of Archie Gottesman, a founder of JewBelong, a nonprofit that set out to “rebrand Judaism” and most recently has taken out billboards in several cities in an effort to combat antisemitism. Williams, who has described a 2016 trip to Israel as transformative, became close friends with Gottesman after a different Shabbat dinner some years ago.

The attendees noshed on challah and expressed appreciation after Leah McSweeney, a cast member who is in the process of converting to Judaism, recited a blessing in Hebrew via Facebook (she had been exposed to COVID-19 so joined remotely until audio issues caused the women at the table to hang up on her). Gottesman led the group in what she referred to as a “Shabbat shot.” And during the meal, Williams initiated a conversation about Black and Jewish relations in the United States.

But fans of the show have focused mostly on the behavior of one cast member, Ramona Singer, who tries to steer the conversation to her own Italian identity. She also mistakenly calls the dinner a “Black seder” (leading one New York Magazine commenter to write, “How can these women have lived so long in NYC and know so little?”) and, in what feels like a made-for-reality-TV moment, criticizes Gottesman’s mismatched napkins.

“If you had asked me before the show what would have been the thing everyone was talking about, it would not have been napkins,” Gottesman told the Jewish Telegraphic Agency. Made from fabric she purchased in Guatemala, “my napkins are the best but maybe they are not for everyone,” she added.

Gottesman said she had jumped at the chance to host the dinner, which took place last December at her home in Summit, New Jersey, because of her belief — baked into JewBelong’s programming — that Shabbat meals are ideal venues for meaningful conversations. She said the discussion at her table had been more in depth than was depicted in Tuesday’s episode and noted that the Aug. 17 episode is also slated to include Shabbat content.

Gottesman also said she was grateful to Williams and McSweeney for representing Jewish life in popular media, especially after they told her that they received antisemitic messages after the show aired.

“What’s interesting and fabulous about Ebony is that when she pitched Shabbat [to the show’s producers], she said they had never been pitched Shabbat before,” Gottesman said. “There have been Jewish Housewives and Jewish producers on the show, and I think it’s really beautiful that it’s a non-Jewish Black woman who said this should be on TV. It was brave.”

—
The post Guess who came to Shabbat dinner? The drama of ‘Real Housewives of New York City’ appeared first on Jewish Telegraphic Agency.