Bennett heaps praise on AIPAC ahead of meeting with Biden 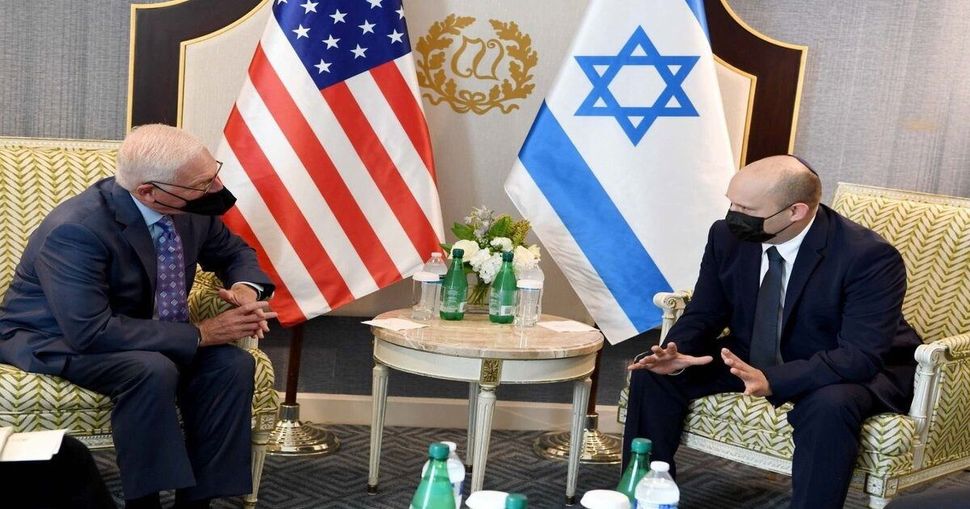 On his first trip to Washington as Israel’s prime minister, Naftali Bennett met with leaders of the American Israel Public Affairs Committee, a group that has been criticized in recent years for backing the Israeli government’s right-wing policies.

The get-together raised some eyebrows.

While it’s common for an Israeli leader to meet with pro-Israel and Jewish American groups while in Washington, AIPAC seemed to come in for some special treatment by Bennett. The sit-down with the group’s chief executive, Howard Kohr, at the Willard InterContinental on Wednesday was the only meeting Bennett had with Jewish leaders ahead of his meeting with President Joe Biden at the White House on Thursday.

After the meeting, the prime minister’s office released a statement that said Bennett told Kohr that he views AIPAC’s activity “as a leading and integral factor in strengthening Israel’s standing in the U.S.” 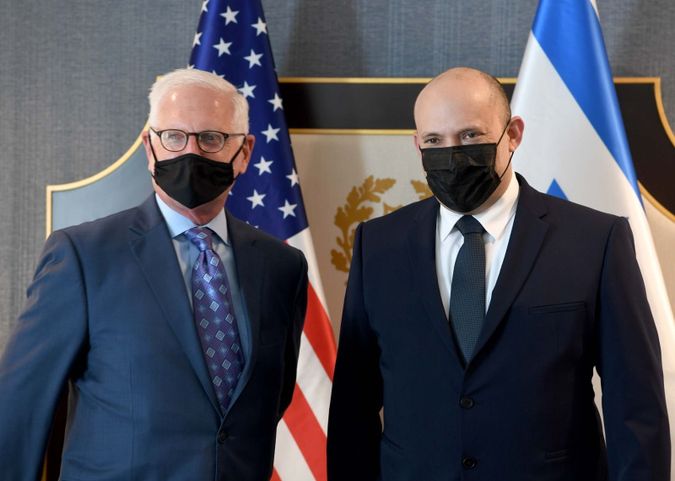 While the Israeli government deals directly with American administrations, it has traditionally made AIPAC its conduit for galvanizing American Jews on its behalf.

But most American Jews vote for Democrats, and AIPAC has received a fair amount of criticism in recent years within Democratic circles for backing Benjamin Netanyahu on the Israel-Palestinian issue and for joining his aggressive campaign against the 2015 nuclear deal with Iran in defiance of the Obama administration.

AIPAC also came under fire for featuring digital ads against members of Congress last year — and this month for targeting the progressive House members, known as The Squad.

Bennett and his partner, Foreign Minister Yair Lapid, have made it clear that one of the priorities of the new government is to restore ties with the Democratic Party and repair the relationship between Israel and American Jewry — alliances that deteriorated during the administration of former President Donald Trump, a strong ally of Netanyahu.

Matt Nosanchuk, a former White House Jewish liaison under Obama, said that it was surprising that the AIPAC meeting was featured prominently at the beginning of Bennett’s visit, separately from meetings with other Jewish groups.

“It could be he was telegraphing that he aligns with where AIPAC is policywise, which is to say that he doesn’t expect or want to be particularly pressured by the administration to go beyond where he’s made pretty clear he stands,” Nosanchuk suggested.

Nosanchuk, president of the progressive advocacy group New York Jewish Agenda, added that Bennett was also trying “to preserve his political credibility with parts of the Jewish community that might otherwise be skeptical of what could come out of a meeting with Biden.”

A spokesperson for AIPAC declined to comment on the meeting.

Ahead of his trip, Bennett said he intends to “demonstrate a new spirit of cooperation” with the Biden administration. But in an interview with The New York Times published Tuesdsay, Bennett said his government wouldn’t enter peace talks with the Palestinians and would continue expanding settlements in the occupied West Bank, based on natural growth.

​​Susie Gelman, chair of the Israel Policy Forum, a non-partisan group that was founded in 1993 to advocate for a two-state solution, said Wednesday that “it is incumbent upon the prime minister and other representatives of the Israeli government to meet with a variety of Jewish organizations when they come to the U.S. because clearly there’s a real divergence of views represented by different organizations.”

While it remains to be seen whether the prime minister will take that advice, Bennett’s meeting with AIPAC “comes almost certainly as an attempt to thread a needle for his Washington audition,” said Shalom Lipner, a nonresident senior fellow at the Atlantic Council and a 26-year veteran of the Israeli prime minister’s office. “He hopes to demonstrate that he values the input and dedication of the U.S. Jewish community by tipping his hat to its premier establishment organization, steering a middle course between other umbrella groups with a more partisan profile.”

Jeremy Ben-Ami, president of the liberal pro-Israel group J Street, told The Forward on Wednesday that he isn’t offended that the prime minister didn’t meet with his organization during what amounted to little more than a two-day visit to Washington. Ben-Ami said that he’s been “very encouraged by this new government and their openness to meeting with and talking to J Street over the last couple of months in a way that didn’t exist with the prior government.”

He said he shared with the new government that it’s in Israel’s national security interest to engage with the full spectrum of Jewish organizations, even those who are critical of its policies. “The long term bipartisan support for America’s relationship with Israel really depends on having dialogue with and engagement with those who don’t agree with things that are being done, and not limited to simply organizations that will agree with them, right or wrong,” said Ben-Ami.

“We care about the state of Israel, and we want it to succeed, thrive and survive.”

Bennett heaps praise on AIPAC ahead of meeting with Biden